X
You are here: Home / My Book Reviews / Book Review – The Bird and the Sword by Amy Harmon

The Bird and the Sword
You just can’t go wrong with a beautifully written tale, penned by such an eloquent author! Amy Harmon is MUCH-loved in our indie book world, and this book is yet another example of her effortless ability to capture our hearts with her words. An author renowned for her captivating prose culminating into stunning stories, delivers, yet again.

I’d recommend this book to anyone, young and old. Such a battle to overcome (in various ways). So much hurt, shame and fear, and yet SO much love and acceptance. What a beautiful message!

I definitely went out of my reading comfort zone (or should I say… my discomfort zone, considering how much I love my painful uber-angst love stories, and super-scary thrillers). But so many in our reading group LOVE fantasy books and have been tempting me dearly.

Considering the fact that I could NOT get over the gorgeous cover, that enticing title, and the rave reviews that this book was getting (and of course, by a tried-and-true author) I was SO in! Especially after that “start”. WOW!!!!!! I was ready. So I stepped out out of my usual, and escaped into an exquisitely written, sweet, heart-warming (and yet still scary-thrilling) fable that had a bit of everything that we love to experience in our “epic” love stories. It was the ultimate fairytale.

This saga is laden in magic, defining many of our main characters, and the fear of magic causing so much strife in their lives. There’s a fight for a Kingdom (with heirs, and of course, avaricious opposition). Our main character is an emotionally mistreated “princess” of sorts, with image issues. She’s been raised believing she’s “broken”

Every living thing has a word, and I hear them all. But I can’t make them.

“Hide her words, Corvyn. Because if she dies . . . if she is even harmed, you will share the very same fate.”

for his own selfish reasons.

He was next in line for the throne. He wanted to be king, and I just wanted to be free of him. My mother told my father I wouldn’t speak again, and she told him if I died, he would die too. He had not doubted her, and I had spent the last fifteen years caged and cornered. My father watched me anxiously for signs of health and hated me because his fate was tied to mine.

And to my delight, of course there’s a beauteous and powerful warrior King. One that she fears and tries to run from. Yet he kidnaps her anyway, using her as a pawn against her father (who’s next in line for the throne). Prisoner at home, prisoner in a castle, but never her own.

“You are afraid,” he murmured. I nodded, not opening my eyes.

Never fear (at least not for who she is, and for her own personal strength)! She’s strong and she’s feisty (and while she lacks some of our basic abilities that we take for granted) the King quickly realizes he’s got his work cut out for him (what delight!!!!). Especially when he gets a hint of that power she is so adamantly trying to hide.

I couldn’t explain how it felt to converse with another human being. To actually converse. I had been reduced to sharing nothing of my innermost thoughts for most of my life. Reduced to throwing things when I was angry. Reduced to tears when I was sad. Reduced to the simplicity of nods and bows, of having people look away from me or become frustrated when they didn’t know what I was trying to communicate.

I had been alone for so long with thousands of words I couldn’t express. Now this man, this infuriating, beautiful, man—son of a murderous king—could suddenly hear me as if I spoke. A woman instead of a caged bird. A human being instead of a silent presence in the shadows.

And the sweet story truly begins,

I wondered briefly if his power to compel wasn’t a great deal stronger than mine. I always seemed to obey him.

but not without a rousing clash of wills, and resistance coming at them from all angles.

I’m going to stop there, because there is SO much of the story you’re going to want to unravel for yourself. There is a war waging, and a people being unfairly condemned. There is greed, and selfishness, liars amongst the closest to them. There are those you think you can trust… that you should not. And those you suspect are treacherous… that become surprising allies.

A beautiful story that I just know my fellow fantasy-readers will love. It’s all encompassing and has that fulfilling feel, ya know? And while my love of rip-your-heart-out and/or mind-twisting reads continue to be my current favorite, fantasy is certainly fun to escape to every once in awhile. 😉

4 stars <— overall for me. Again… possibly just because I’m not a huge fantasy devourer, and so I was able to put it down (I didn’t quite get that devour-in-one-sitting urge). But OMG 5 stars for that writing!!!!!!

P.S. Thank you SO much to the author for the review copy. GAH I just love the cover, and my name is on it. Er… sorta. 😉 What I would do to have a signed print copy like that. *sigh* Tee hee! 😛 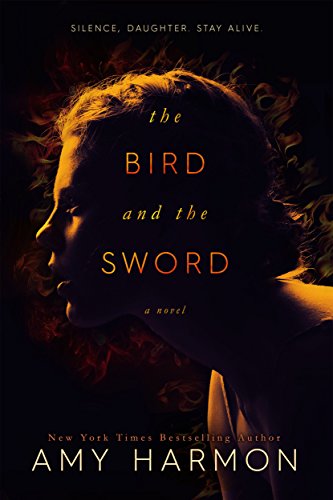 Is it a short story?

Maryse, great review. I like you, am not a fantasy lover, so this was out of my comfort zone too. I’m so glad I read it though; it was a beautifully written, unique story. Loved therelationship that developed between Tiras and Lark. *sigh*

Thank you Cheryl!! I had myself a crush. 😉

I love Amy Harmon and I love fantasy, so I can’t wait to read this!

You guys!! Let me know what you think. I don’t have much “Fantasy” experience and I’d love to get the fantasy-experts perspective on this one. There are a few books from SUPER-POPULAR fantasy series that I one-clicked, and I’d love to know how this one compares.

Reading this now! Love Amy Harmon. I feel like no one talks about her book “A Different Blue”. It’s my favorite book by her and one of my favorite books of all time! !!!!!!!!!

I don’t even think I’ve read that one, Lisa!!! I have it though…

I’m about 30% in and am absolutely loving it! I’m not a fantasy reader at all, but this is just so good. Amy is an amazing writer!
Thanks for the recommendation Lisa C., I’ve read all of her books but that one. I’ll give it a go!

Ps thanks for the recommendation, enjoyable read, saw it on your release list from the other day. Clicked the link, down loaded a sample and then bought it. Took me back to the my early scifi/fantasy genre reads.

My pleasure Rosheen!!! I’m glad you enjoyed it, too! 😀

I finished this book yesterday and absolutely LOVED it! It reminded me a lot of KA’s Fantasyland series.