X
You are here: Home / My Book Reviews / Miscellaneous / Book Review – The Demon in Me by Michelle Rowen

The Demon in Me (A Living in Eden Novel)
Darrak. Sinfully sweet and sexy yet potentially evil, Darrak. I have been crushing on you since I first spotted your cover of “Something Wicked”. With that slightly arrogant expression on your face, you sure looked like you were hiding something wicked, alright. I oooh’d and ahhh’d, and used every excuse I could to post your most gorgeous cover on my blog. I would bring you up in book-related conversation, just so that I could eventually gush over your cocky, yet undeniable handsome-ness. And all of this before I even truly knew who you were. I am not ashamed to say, I totally judged your book by it’s cover. And I’m happy to report, you are as gush-worthy on the inside as you are on the out.

A quick thanks to Sherry for sharing you. What a thoughful care package! “Sherry” is to “Sharing” as “Darrak” is to “Demon”. She and I have the exact same taste in “book/cover model” men, and lucky for me, she’s always willing to share. LOVE her!!! But ummm, Sher? Z’s still mine 😉 Okay, okayyyyy… I know. We have an understanding. *pout*

Now to let you other girls in on the awesome-ness that is Darrak.

Eden, a slightly psychic female is hired by the police to help investigate a serial killer case. Doubting her own abilities, she is surprised when she realizes that she knows exactly where he is. Unfortunately, in her discovery, he attacks her, but is quickly released when he is gunned down by the head detective. Rambling about being “possessed by demons” before his demise, she soon realizes he was telling the truth when his very demon sets up residence within her!

“You’re a demon,” she said it so quietly, even she had trouble hearing it.

“And you’ve possessed me?”

“If you put it that way it sounds a bit ominous, doesn’t it? I’d rather think of it as ‘sharing living space.'”

Darrak insists he is a “good demon” that was originally created to hunt the bad guys. Unfortunately, at some point in his long life, an evil witch used his own powers against him, and banished his body, forcing his “essence” to only exist by residing within a human. However, the humans always seem to die after a year of his possession (as he slowly, eventually, drains them of their energy). Because he is such a “good guy”, he only selects bad humans, since the world will be a better place without them anyway.

Eden however, has her doubts.  Her belief in good and evil, and what she has learned about “demons” has her questioning his every motive. After an attempt at exorcising him, her own good intentions towards his plight keep her from following through with it (banishing him this way would be the end of him for sure).

“Please, Eden, stop this. I’ll do anything! I promise we can fix this in another way.”

Could she do this to someone, something, that could possibly be good? Should she give him a chance to prove himself, and help him find the witch that will free him from his human prisons and finally break his curse (risking her own life in the process, as her “one year” year ticks by)?

There is a fun twist to Darrak’s new situation, however, that provides a convenient “in” to the romantic possibilities between these two. Because of Eden’s psychic energy, he is able to use it to become corporal during the day. His “physical body” however has limits. He must stay close to Eden at all times… and you know what constant closeness leads to, between two hot people, right? BIG. HUGE… CRUSHES! 😉 One look at Darrak’s physical perfection biases Eden’s perspective on the entire situation.

And there are others that factor into their new life together, causing much turmoil (although alot of it, funny!). Eden works at a PI firm, and she is suddenly getting an influx of “others” requesting her investigative aid.

Ever since Darrak had come into her life it seemed as if she was a magnet for paranormal beings – demons, fairies, and now… feline shapeshifters? And everyone seemed to be dealing with a life-or-death scenario. Including her.

Eden and Ben (the detective that saved her life), have a definite thing for each other. Having two magnificent men in her life sparks some serious romance, tension and several mighty fine alpha stand-offs.

“Eden,” Darrak said. “This guy is damaged goods. I wasn’t sure what was off about him but now I know. He’s not right for you. Too much baggage. You don’t want that. Let’s get out of here.”

The exorcists that she hired and then fired are watching her every move, and the wicked witch that caused their whole problem… well… who and where is she, and if they find her, will she even be willing to help?

The “bad guys” provide for some very dangerous situations, and this book will keep you guessing at who the bad guys really are. Darrak included. Prepare for some moments of shock and awe.

One of my favorite parts that had me giggling at a very tense moment in the book (but I won’t tell you the circumstance because it’s an important part):

“Don’t you understand? You’re possessed by a demon. From Hell. Why aren’t you more upset about that?”

“I finished freaking out the other day.”

Okay so I’m  dying to know more (especially considering how this one ended…) and I’m off to book #2. Yup. Something Wicked . The one with THE. Hottest. Cover. Ever. 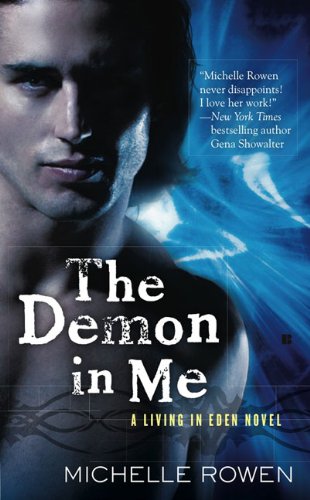