WARNING: Although this is just a synopsis, some of the information given, may be considered spoilers…My review in no way gives away the ending, and there is MUCH to read about!

Anita Blake is on a case to solve the recent murders of humans by a supernatural being (appearing to be a murderous Zombie). She is lead to “Dominga Salvadore” (the most powerful Voodoo Priestess in all of the Midwest) through a fellow colleague, that believes Dominga might be able to help in solving the identity of what, exactly, is killing everyone. Anita soon learns about the true power of magic (and evil), in the likes of this Voodoo Priestess.

You see, Dominga, had discovered a way to manipulate the souls of the dead, removing and replacing their souls from their bodies, at will, thus delaying any decay. She intends on using this power to create “sex slaves”, (by selling the dead/alive zombies) and not ever allowing their souls to pass on.

Dominga recognizes the true power Anita possesses and the potential of what Anita could become. She offers to teach Anita how to develop her abilities (and not just her voodoo skills that she limits herself to), and wants Anita to partner with her on this project. When Dominga is refused, she causes a world of torment for Anita, and Anita (all on her own) learns to use her powers to their maximum potential for the fight against evil.

Anita also has a smaller battle to deal with in her private life, in resisting the irresistible Vampire “Jean Claude”. In the recent onslaught of battles, the results of his protecting Anita have also bonded them together via “Vampire Marks” which allow her to heal quickly, be stronger than most humans, and allow each other to communicate in ways unspoken. In the Vampire world, she is now considered his “Human Servant”. However, in the real world, Anita is nobody’s servant, and refuses to attach herself to anyone, let alone a VAMPIRE, in such a way. Despite being seriously attracted to Jean Claude, she is a devout Christian,  and fears damnation by allowing herself to succumb to a Vampire).

Her struggle with her spiritual beliefs

“How do you know what compromises my soul? You don’t have one anymore”

Her struggle with her attraction to Jean Claude:

“I feel your desire for me, ma petite, as I desire you”

I shrugged. What could I say? “It’s just a little lust, Jean Claude, nothing special”. That was a lie. I knew it even as I said it.

While most Vampires would force the issue with their power and through fear, Jean Claude’s affection for Anita is stronger than his desire to control her, and he allows her to fight him, while gently easing his way into her heart.

Problem is, now that he is the Master of the City, he may appear somewhat weak to the other Vampires, as he is unable and unwilling to control his “Human Servant”.

“By fighting me, you make me appear weak. I cannot afford that ma petite“

Anita again, is thrown into a whirlwind of deadly magic, murderous monsters, and fights for her life multiple times throughout this book (she has three different evil villains to contend with – the murderous monster, the Evil Voodoo Priestess, and one of her own clients, who threatens her life if she doesn’t perform his request in raising a certain dead). The tensions run high, the events always frightful. Her strength, skill and strong mind almost always keep her a step ahead, but not without the deadly close calls always nipping at her heels.

Believe me! The end will leave you breathless and wanting more (despite the possible nightmares that you may experience)… 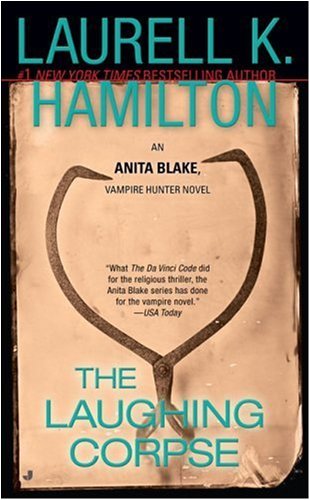