You are here: Home / My Book Reviews / Book Review – The Pact by Karina Halle

The Pact
<— *oomph*!!!! This one has it!!! ANGST in all of it’s delicious angsty glory. IT IS HERE my friends. I was pretty much… “into” it you know? It was good, entertaining, funny, cute, and going the way I expected it to go. I could tell they were into each other, but I wasn’t FEELING that just yet, ya know? That… intense pining. The “OMG I can’t breathe when he’s around” level. Not yet.

But then… things. Karina Halle’s version of emotions kicked in and OMG. So real. So raw. So intense. And I was SO into it!!!! And so was Sherry.

Sherry: When she *spoiler* and then *spoiler*, then finds the *spoiler* My heart broke, and I knew I was done… LOVED IT…So So much. Ooops, hahaha, I thought this was your PM. Damn I was tired. But wow, loved the Book!!!

Amber: OMG! I am at **% I think my heart is going to burst from my chest. Cannot put this book down!

Tee hee!!! I know. You guys are SO mad at me right now with all of this spoiler business. Believe me, it’s worth it!

Now, to be fair… it took me a little bit to be that connected. I was enjoying it, as it was fairly easy-going and sweet in the beginning. Almost safe. It had that comfortable contemporary romance feel. But I liked it ’cause we were dealing with adults. Their flirtations, their connections and their dating other people as their 30’s were coming close. That was the first half, and necessary because we got to know them, and their pining for each other as they continued to resist each other. Living their lives and all that.

Two guys and a girl that have been best friends for years, she dated one (James), he was too scary-intense as a boyfriend, and they broke up.

He was temperamental and would fly off the rail easily and usually over nothing.

Yet she’s always had that *spark* with the other (Linden). But you know how that goes. Nobody wants to ruin a best-friendship and the three of ’em don’t want to mess with a good thing.

I don’t want to lose them. But as I look around the table, I’m wondering if that’s just the way things go in life. Age brought us together, age will tear us apart.

And Linden proposes a “pact” at one point. If they weren’t seriously involved with anyone by the time they hit 30, they’d marry each other. Yep, we’ve seen this before, but not necessarily when it involves others that might just throw that monkey-wrench into their whole shebang.

“The two of you in a marriage? World’s pickiest woman with the world’s biggest manwhore? Yeah, have fun with that.”

Linden is a total player. Unabashedly so. He can have anyone he wants and has never wanted anyone. So why would Stephanie be that different to him? She asks herself that very question… and doesn’t take him all that seriously.

He’s one hot package that any girl would be lucky to snatch up.

But he’s egotistical, cocky, arrogant and a player. It’s hard to get any real emotion out of him other than intensity – he’s got this way of looking at you, at life, like he’s trying to spear you alive. He lives his life on the selfish side, can be passionate about something (or someone) one minute, then indifferent the next.

Until the time comes, and things start heating up. And I’ll let you play with the rest from there. *whoooooo!!!*

I’m afraid I can f**k up two friendships at once.

So the pact goes on the back burner.

Two more years and then I’ll face it.

Just two more years until everything changes, for better or for worse.

This one was different for me, because the second half REALLY kicked it into high gear. Slower beginning (albeit good), but at a certain point I could not put it down, and I felt EVERYTHING! I won’t say what, so you can be kicked in the gut (or tickled in the gut ;)) on your own, but just… wait for it. WAIT FOR IT!!!

Everything is changing. I’m nowhere but I’m somewhere and it’s not where I want to be.

I don’t really know what I want.

But I know I don’t have it.

4 stars! <— 3.5 stars for the first half (misunderstandings, misplaced loyalties, you know the drill) but 4.5 stars for second half but 5 STARS ABSOLUTELY for a certain part that rocked my world!!!!!!!!!!! In fact, I almost want to 4.5 star this book, and maybe I will, ’cause of how pivotal that part was, for me. You want intense? YOU GOT IT!!! 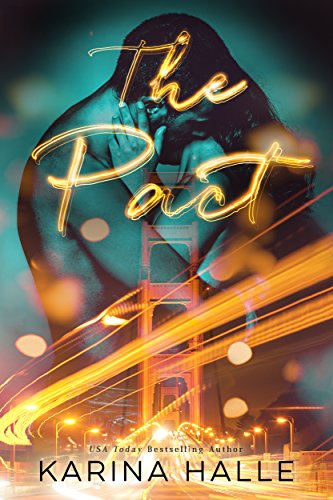 I am struggling with this book. 🙁 i keep reading it and then put it down. I am finding it too angsty for my taste! I guess I will keep trying!

Where are you at, Jen? What percentage?

Loved it, but hey – she’s such a phenomenal writer! Of course it’s fantastic!

I couldn’t of said it better myself…I completly agree. I need a Linden… I need a pact… but I am over 30….does age matter!!
I thought the beginning was slow…all the misunderstandings. But then it finally happened and I loved the second half and the thing….I love me some angst. I would totally recommend…even if I did want to kick James @ss more than once.

Loved it!!! The scene in bed, the way she describes her feelings for him, so beautiful. Karina Halle is one of my favorite authors. This type of story was definitely a shift for her, but it totally works because she simply knows how to write characters and emotions you connect with. I agree, it took a little while to feel a deeper connection, but that second half was wow! I have 24 Karina Halle books on my Kindle and have enjoyed every single one.

*giggle* I love when you get all excited over a book like that. 😉 I think if I had been able to read it straight through without any interruptions – like New Year’s prep and, oh, I dunno, LIFE stuff! Dangit! – I would have had more of a freak out during this one. See?? That’s what happens when you involuntarily have time to come down from the angst high between intense parts! *huffs* They’re not supposed to be read like that for full effect, right? 😉

Last year (how crazy to say that about 2014!) was the year of Karina Halle for me. Yeah, doesn’t sound weird or anything. 😛 But seriously, this one made book number 19 of hers for me (counting in the EIT novellas) when before 2014 I had never read any of her books. She’s definitely one of my favorites now!

Great review. Loved this book. Karina Halle is one of my favorite authors!

For Starters, I’ve not been one to get all giddy over book covers, but I absolutely loooove the cover of this book. I also loved the cover of Love, in English. Karina Halle is turning into my favorite author. This book was fun and sexy. It amazes me that she wrote this book while on vacation because she found inspiration and ran with it. Shows the sheer talent and passion she has for writing beautiful stories like this one. This book is not a complex story, not too many twists and turns but it kept my attention until I was finished.