X
You are here: Home / My Book Reviews / Book Review – The Promise of Stardust by Priscille Sibley

The Promise of Stardust: A Novel
OMG what a premise!!!! This one had me in knots and infuriated and choking on my own flabbergastment <— Okay yeah not a word but… you get the picture. I was incensed and devastated and while I could technically “understand” the two sides of this incredibly heartbreaking, unfair situation, in my mind, the answer was clear, and I couldn’t even believe we could possibly be debating this!!!!

But… there’s always room for debate, and in a case like this, the opinions are vehement and I have no doubt, in real life, the opposition would be just as intense.

That said, I enjoyed this one. Brilliant writing and introspection, and while it doesn’t seem to be a love story at first glance (more, one of social issues and the right of a father to protect his child), it truly IS an epic love story. And a second-chance one, at that.

Amy: Maryse…you’re listening to The Promise of Stardust?!? I absolutely loved that one! I’d say 4.5 stars…maybe even 5. Yeah, I’ll say five since if I had any complaints I can’t remember them, and the storyline was such a unique one, for me at least. Crazy emotional, even in his POV. …The Promise of Stardust is great and SO different from the norm. And I loved it even with it being all in his POV, so that should tell you something.

…so heartbreaking with a very unique story line. Go in blind because it’s best when you don’t know which way it will go.

Jeanie: Omgeeee! The Promise of Stardust – I read this back in June and it still gives me goosebumps thinking about EVERYTHING that happened. It’s a heartbreaking & tragic story but I loved it because of all the feels and all the conflict.

From present to past, we get a sense for the urgency of the situation at hand, the obviously heartbreaking news this husband has just been delivered, interspersed with an entire lifetime of love between two children that grew up together, fell in love as teens, and became so ingrained in each other’s lives (even when apart).

It almost reads as a cross between a Taylor Jenkins Reid book and that of Suanne Laqueur’s “Fish Tales series“. A mix of love, and tragedy. Family and friends, and everything in between, while we revisit old hurts, new profound pain, and the soulmate friendship that keeps them connected no matter the circumstances. Love and life. Real life because it can sometimes be devastating.

Matt and Elle have known each other since they were kids, have been best friends, practically raised together as neighbors, with parents from both sides that love them all immensely. And eventually, they fall in love (as young teens) and this love is the kind of first love that lasts through the ages, even through break ups, and betrayals and misunderstandings, and very troublesome times.

Elle becomes an astronaut (heck yes!! One that actually goes into space and everything) and Matt is a surgeon, and they are struggling with fertility issues. Lots of heartbreak there. But the worst of all heartbreaks is when Matt discovers the love of his life, his wife, in ICU. Braindead after a freak accident. And now… pregnant, again.

Elle has once signed paperwork indicating she doesn’t ever want to be on life support, and Matt (and family are mostly in agreeance with taking her off life support) but once they realize she’s pregnant (what she’s wanted desperately) the lines are drawn.

“You can’t make Elle go through what my mom did.”

I peered through the glass at Elle again, horrified by my decision to keep her on life support. “It’s not the same. She isn’t in pain. And she’s— pregnant. If we can keep her stable long enough, we can save the baby.”

Respect her wishes of never wanting to be in that state, or allow the baby to come to term and be delivered before making that final decision.

“It’s just wrong to keep her in this state, as an incubator for something that isn’t even a baby yet. Women are more than vessels for offspring.”

My heart was pounding in my chest so hard I was seeing spots. “She’s not an incubator. She’s the baby’s mother.”

Oooooof my friends. This one is NOT an easy read, and while for me it was an obvious choice (There’s a LIVE HUMAN IN THERE that they BOTH wanted… want), for others, it’s still just a fetus with no “human” rights, and her wishes come first.

*sniffles and wipes nose on Manny*

I’ll let you discover the rest. I found it an fascinating read (and fascinating listen… I had “Alexa” – on my Echo – read to me while I cleaned the house and cooked a meal), but I did find it lengthy. At near 600 pages (which is important since this story spans their loves together and apart), I found the repetition of the whole “human rights” and laws, and indecision thing a bit tedious (but maybe because I was so incensed).

Legally, though, it is about the rights of an unborn baby versus his mother’s, and that will have far-reaching implications. Right to life. Right to die. Rights of the unborn.

Only because it frustrated me BIG TIME, because in my mind, the choice was clear.

Amy: I’m about 65% into The Promise of Stardust, and OMG I am getting SO mad! Yes, it has it’s emotional moments and has made me heart clench at times but for the most part I’m just FURIOUS at the people who are fighting him. I keep having to resist skipping to the end because it’s making me so mad, and I want to know how it’s going to end. I can’t remember ever wanting to do that with a book I’m enjoying…I’ve done it plenty of times though with books I don’t care for, though.

He’s not trying to keep her alive (he is a neurosurgeon so he *knows* she is brain dead), he is just trying to give their baby a chance after some devastating losses…

But I get it. The laws are not clear,

“…the court doesn’t recognize the human rights of babies before they are born— or it hasn’t until recently. And the court will only give guardianship to someone it recognizes as having human rights. The unborn don’t have a voice.”

And the paperwork wasn’t “exact” (a few conflicting documents) and the family members (and ex-boyfriend) that believed they had a legal (yes… they sort of did) “say” in the matter. What a debacle from ALL sides…

Even though they were technically siding with me, I avoided eye contact with the activists. They were not picketing on my behalf, and certainly not on Elle’s. They came with their own agenda, and our tragedy was merely a way to promote it.

SO WORTH IT, if you’re in for the long haul and want to read something really intense (and beautifully written), albeit long and drawn out. You’re in for an eye-opener for sure. 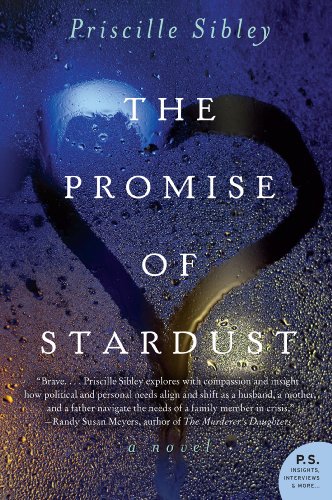 “It almost reads as a cross between a Taylor Jenkins Reid book and that of Suanne Laqueur’s “Fish Tales series“.”

Holy Moses Maryse you said all the magic words.

Wow! I finished this book last week and I loved it. I agree, it did remind me a little of Fish Tails (one of my all time favs!). Very well written, tough topic, so ‘real’. Not to mention the emotional turmoil… I had to set it down and walk a way a time or two to gather myself as I’m so with you Maryse! The choice was obvious – gah!!!! Loved it!!!

*Jumps up and down squealing* I just got an email from Amazon this second that said it shipped! Better hurry through the Royals…