The Reluctant Vampire: An Argeneau Novel
This was cute. Nice and entertaining enough, but it didn’t rock my world. No jolts, no making me angry. No need to cry, and really… not much swooning for me, either. But that’s not necessarily a bad thing right? Sometimes we just need a nice light read on a lazy Saturday afternoon.  And this one delivered a little something extra. A laugh out loud moment (with a certain “black and white kitty”) that had me giggling so hard, and for so long, that my husband felt the need to ask me if I was going to be okay.

This review will be short and sweet, as was the book (woops – lemme fix that). Maybe not “short” as in “short-story” short, but you get the picture.

Harper, the vampire, lost his human life mate, when they tried to turn her into one of them. Her heart gave out. He blames himself (he thinks, had he not been so selfish as to ask her to “turn” for him, so they might spend their long lives together, she’d still be alive today). So he’s mourning. Life mates are hard to find, and have to specifically match a vamp in ways that make them a perfect couple. The “nanos” know, and it just has to be this way. Without a life mate, a vamp can exist forever with no real zest for life. But true love can only be with a life mate (I guess the vampires version of a soul mate). Forcing a relationship with someone that is not a nano-perfect match will not produce a passionate love story. What’s a nano? Ohhhhh that’s another story altogether (and very well explained in each book).

So anyway, awesome Aunt Marguerite has already figured out who Harper’s next perfect life mate is, and so far, she’s never been wrong. Don’t ask me how she always knows, cause in the beginning of the series, she was always as surprised as everyone else, but I digress… as of late, she always finds their perfect “matches” (whether they be human or already vampire). So to get them kick started onto the road of love, she finagles a way to have them work together, so they can discover it for themselves.

Along comes Drina (an Argeneau vampire from Spain – and the future lifemate of Harper). She’s in on the whole “I’m supposed to love Harper” thing, but Aunt Margeurite has warned her to keep quiet about it, as Harper will most likely resist a new lifemate, to continue to punish himself for his old one.

“It was smart you played it cool and didn’t just blurt out that he might be your life mate. Harper’s going to be a hard nut to crack,” Stephanie said suddenly. “Hell fight this life mate business.”

“Why do you say that?” Drina asked warily.

“Because it isn’t grief that’s making him so miserable over Jenny. It’s guilt. He thinks if he’d never met and tried to turn her, she’d still be alive. It’s eating him up. He doesn’t think he deserves to be happy. He thinks he needs to suffer for her dying. He’ll fight it and avoid you for the next couple of centuries until he feels he’s suffered enough if he finds out you’re life mates … unless you creep up on him.”

Resist? YESSS! I was so happy. Let the game of love and angst and broken hearts begin. Break-ups and make-ups (my favorite) 🙂 And there was *some* exciting resistance (and a touch of angst), but those darn nanos got in the way, and nature took it’s course too quickly for me. Well, the nanos… and her extremely provocative outfits that she bought. Yeah… I’m thinking the clothes (or lack of ’em) helped 😳

“Thigh-high boots would work with that dress,” Mirabeau decided. “In fact, they’d be sexy as heck with it.”

“The shoes are fine,” Drina insisted, flushing with embarrassment at all the attention. Everyone in the room was now staring at her legs in the fishnet stockings. Fishnet for God’s sake! The only thing that she could think of that would be sluttier was the thigh-high boots.

“Well, I suppose Harper can carry you if you find it too slippery,” Stephanie said cheerfully.

“Right. The boots then,”

But this wasn’t just a love story. As in all the Argeneau and Rogue Hunter adventures, there’s always an element of danger in the mix. The two were assigned to guard a newly turned teenage vampire (turned by a dangerous rogue, against her will). She’s distraught at having been torn away from her family, she’s lonely and thinking of running away.  And all the while, she’s dealing with her new powers (strange ones at that), and in danger of that very rogue vampire coming back to get her. Bad things keep happening and it appears as if some one’s out to get her. So she was assigned a crew of “good vampire” babysitters, and this is how we readers find ourselves gathered with this fun-loving group.

My one real complaint is that I forgot. Forgot? Yup. This book takes place in the same town (with many of the same people) as “Accidental Vampire”. I really liked that one, but I read it eons ago! I couldn’t remember half of what and who was in my face in this one. As I read, bits and pieces came back to me, so all was not lost. However, had I known, I might have re-read Accidental Vampire to refresh my memory, and put me back in the “feel” of that town, and those wonderful characters. By the way, the only people I do remember thoroughly from that book are Elvi and Victor, and unfortunately, they were missing in action for this installment 🙁 Bummer.

Oh, and where was Bricker? He’s my new favorite crush from this series, and it just wasn’t the same without him. Of course, I get it. He’s probably busy doing something in another book, but still… 😉

Lots of heartwarming moments, and a few more twists and turns (one that I totally saw coming). But there was just something about it that kept me from fully bonding with this group, and this story. Oh well. Maybe the next one? 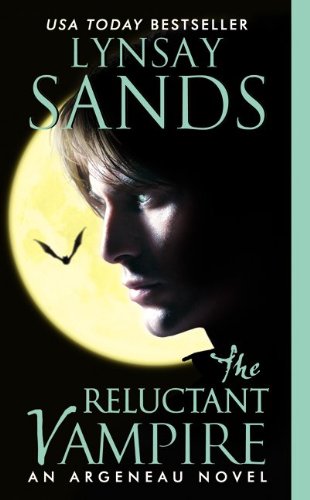