X
You are here: Home / My Book Reviews / Book Review – The Rosie Project by Graeme Simsion

The Rosie Project: A Novel (Don Tillman Book 1)
An all around feel-good read that gave me plenty of out loud chuckles, and a mostly permanent grin as I read it. Not angsty (although plenty fun in the confusing “love” aspect), but mostly just funny as an endearing yet quirky man dead-set in his ways navigates the romance world looking for his perfect wife (dubbed “The Wife Project”). And then finds himself involved in an entirely different project, helping a woman that is ultimately wrong for him on all levels, but he can’t help but be friends with.

Highly recommended by many of our fellow rom-com lovers, it’s been on my TBR list for far too long no. But it’s on my main 2015 Reading Challenge list, and with these praises, I knew it was time to read it.

MichelleS: …you may really enjoy The Rosie Project. He’s a aspie-like professor who decides it’s high time he find a wife… no problem… just create a questionnaire and weed out any candidates that aren’t the perfect fit, right? Not so much he finds out. Then his friend “helps” out by forcing “Rosie” on him… who is the opposite of everything in his list… let the hilarity ensue… and it does. Laugh out loud funny. … The “hero” is a professor and she is a hot hot mess. It was so good.

Kristen: I cannot recommend The Rosie Project enough! Although I love stories riddled with angst and steam, sometimes I just need a break from the roller coaster yah know? 🙂  This book is every bit a satisfying as a bad boy/tear jerker/love triangle, but in a superbly written and refreshingly different way. This should be your next read when you’re craving something different and need a palate cleanser!

MichelleS: …funny and smart. I bet you won’t be able to NOT quote something funny that he said or did to whoever is around while you read it. If you liked Puddle Jumping, then you’ll love Rosie Project… because it is the grown up, adult, very witty version.

Jean: Reading The Rosie Project now which is way different and the guy reminds me of Sheldon from Big Bang Theory!! Lol! Funny stuff!

Maryse: Jean!! Yes… he reminds me of Sheldon. Exactly!

Don has Asperger’s syndrome so he’s socially hmmm… “awkward’ and quirky. Highly intelligent and trying to find a wife, but his standards are high. Excessively so. And so far? All of them are completely unacceptable.

“How many are suitable?” asked Gene, finally getting to the point.

“So far, zero. The questionnaire is an excellent filter.”

But he meets one (Rosie!!!). She’s an outgoing girl (a bartender) and smokes and drinks and is outwardly forward, and not in the least bit affected by his own personal reservations on socially acceptable behavior. But… you know… he sorta cringes and gasps in shock at some of her habits. Yep. You guessed it. TOTALLY UNSUITABLE.

But the lack of cooking skills on her part was the third fault so far in terms of the Wife Project questionnaire, after the late arrival and the lack of fitness. There was almost certainly a fourth: it was unlikely that her profession as waitress and barmaid was consistent with the specified intellectual level. There was no point in continuing.

But they get along, and she doesn’t appear daunted by his obvious disinterest and invites herself to his place. His well regimented sanctuary. Tee hee!!

Before I could protest, Rosie had flagged down a minivan taxi with sufficient capacity for my bike.

“Where do you live?” she asked.

She doesn’t judge him or make him feel out of place for his need to adhere to a strict regimen. In fact, she accommodates him, and helps him solve a few of his issues when things get out of whack.

“I’m not proficient at dating There are so many rules to remember.”

“You’re doing okay,” she said. “Except for staring at my boobs.”

This was disappointing feedback.

And tries to get him to see the beauty that is all around him.

“The city lights. The view’s amazing.”

“Unfortunately it’s static. Once you’ve examined it, there’s no reason to look again. Like paintings.”

But after chatting with her, and drinking a few glasses… or bottles 😉 of wine… he likes her well enough.

“You seem quite intelligent for a barmaid.”

See? It’s great and cute (and smart) like that all he way through.

He soon realizes she’s got her own set of issues. She doesn’t know who her father is, and it could be anyone from her now deceased mother’s graduating class. So he decides to help her as a friend by helping her find her father via travel expeditions and hilarious attempts at collecting DNA samples. ‘Cause, he’s a scientist you see (and a professor!), and her needs are right up his alley!

So they stalk all these prospective biological fathers that her mother may have “done it” with, and he’s all discombobulated and pulled out of his routine and it’s just plain funny!!!! And of course… sure. Considering the name of the book, and how cute these two were together (both quirky in their own ways), I had a feeling I already knew the outcome (romance-wise) but I still enjoyed the whole ride ’cause it was so fun seeing him completely out of his element. The challenges he faces, and his subsequent reactions to them.

He does all sorts of minorly-illegal-ish stuff, and you know… like…. climbs down a wall like spiderman, in an escape attempt. But… ummm… he’s not spider-man, although he doesn’t realize this (mind over matter, you see), so it’s hilarious!! His reactions to people’s reactions? *snort-worthy*

It seemed we were friends again.

*giggle* I love how he “processes” things. JUST LOVE IT!!

“I always have my breakfast before I shower.”

“How old are you?” said Rosie, aggressively. She didn’t wait for the answer. “You’re like an old man – I always have breakfast before I shower, don’t sit in my chair, that’s where I sit… Do not f**k with me, Don Tillman.” She said the last words quite slowly. I decided it was best not to f**k with her.

Plus! There was the element of emotional and social growth, truly connecting, deep friendships, his social cast and crew, and social behaviors changing… and realizing that sometimes you don’t NEED to change to be loved. I loved that. I learned a lot myself, in fact.

And don’t forget that “father-mystery”!! It’ll keep you guessing to the very end.

It was a great, fun read that made me happy the entire time I read it. Captivating characters loaded in charm and believability and I just wish I could be a part of their friend-crew. A very heartwarming read, indeed.

P.S. I just found out book #2 was just released!! The Rosie Effect: A Novel (Don Tillman Book 2) Mind you book #1 is complete (no cliffhanger) but hey, more with this crew sounds like an awesome idea to me! 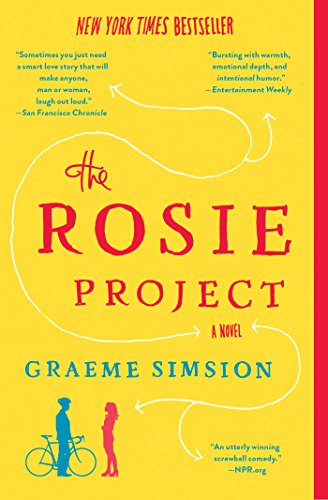 Loved this book! When in the mood for smart & funny, this is a sure bet. Maybe because I work with teens in middle and high school on social skills (humor, sarcasm, conversations, etc) I especially connected with it. I could see a bunch of my students becoming professor Don. (That’s also why I loved Puddle Jumping).

Awww, so glad you enjoyed it! Such an endearing and funny novel, reading your review makes me want to read the book again. 🙂

I love books with great humor and quirky characters! Loved your review, Maryse!