X
You are here: Home / My Book Reviews / Book Review – The Seven Husbands of Evelyn Hugo: A Novel by Taylor Jenkins Reid

The Seven Husbands of Evelyn Hugo: A Novel
This is one of my favorite authors and I have been so excited to read her latest (in fact, I received a review copy, and I held off so I could devour it right around release day) and that time is here! Almost. 😉

And I just want to say, that this is one of those that has that perfect, gasp-worthy, last line that brings it all together.

Maryse: I am reading The Seven Husbands of Evelyn Hugo!!!!

Grey: Seven Husbands… EPIC!!! *Squee* gah! I can’t wait until I can gush with someone else about this one!

Amy: Grey! I can’t wait to read Seven Husbands!! Of course it has been preordered for me since I first heard about it here.

Nay: …right now, the book I’m most anticipating is The Seven Husbands of Evelyn Hugo by Taylor Jenkins Reid!

And it was good! It held me captive from start to finish, even if I did’t particularly “fall in love” with anyone (I figured I would… you know… due to the number of husbands we’d be introduced to. ;)). Because, a few of this author’s stories are more life stories over love stories (although love ALWAYS factors in). And this one was no different. Obviously. With a title like that. But this wasn’t exactly that kind of story.

Yet, it had so many incredible “life” messages, such meaning and poignancy, that I fell in love with it as a whole.

It’s a story within a story. While it’s, at first, about an up-and-coming journalist (Monique), specifically (and surprisingly) requested by an aging, elusive starlet, to write an article about her,

“What are you saying?” I ask, and shift slightly in my chair.

Frankie clasps her hands in front of her and rests them on the desk., leaning toward me. “I’m asking if you have the guts to go toe-to-toe with Evelyn Hugo.”

Of all the things I thought someone would ask me today, this would probably be somewhere around nine million. Do I have the guts to go toe-to-toe with Evenlyn Huge? I have no idea.

I want this opportunity. I want to write this story. I’m sick of being the lowest one of the totem pile. And I need a win, goddamit. “F**k yes?”

it becomes so much more. It becomes an enlightenment.

“You have a once in a lifetime opportunity here, Monique. You can see that right?”

“So do yourself a favor and learn to grab life by the balls, dear. Don’t be so tied up in trying to do the right thing when the smart thing is so painfully clear.”

And even more so, it becomes a personal revelation (oh yes!!! There is A TWIST!!!!). Oh boy was I excited to find out what this “you’re gonna hate me” secret would be. 😉 But the twist is not the only revelation.

LIFE. Her life… OUR lives, the human condition in general, that is one of the most amazing revelations of all.

Evelyn takes a second to answer, and in that moment I realize that she has just agreed to the very thing she swore she would never do – a Vivant cover – just so I won’t walk.

Evelyn wants me for something. And she wants it bad.

And now I’m finally starting ti suspect that  should be scared.

But, let’s get down to the nitty gritty. The actual story:

This is the story of a shrewd and designing (read: somewhat manipulative) 50’s starlet/pinup/one of the most famous actresses ever that started from the bottom and worked her way to the top, in any way she could. Without shame, without reservations, she uses everything she has (yes, even the casting couch plays into this), making deals with the “devils” (aka: some of the worst in the industry) to get everything she’s ever dreamed of.

I had made my way three thousand miles from where I was born.  I had found a way to be in the right place at the right time. I’d changed my name. Changed my hair. Changed my teeth and body. I’d learned how to act. I’d made the right friends. I’d married into a famous family. Most of America knew my name.

But what she’s dreamed of doesn’t only consist of materialistic things (at least not at first). Getting away from her creepy father. Becoming self sufficient. Being independent. Being successful. Being rich. And most of all, being famous. And with fame and wealth comes the desire for even more fame and wealth, and Evelyn finds herself locked in a never ending cycle of give and take. Lots of take… but considering Hollywood, and all it was back then (and probably still is right now)… oh boy does she sacrifice a ton, and give so much of herself, for it.

Years and years of self-sacrifice and personal injustices, forcing herself to be the “Evelyn Hugo” that everyone expects her to be (even her, after all.. SHE did reinvent herself) while desperately just wanting what the heart wants.

I was going to get married. To someone I loved this time. To someone that made me fee the way I was pretending to feel in the movies.

This IS an epic love story, but there’s so much expected of her, and so much that she has to give up to keep what she has, and continue on her rise to the top, that she finds she’s slowly losing herself in the process. And everyone else.

But there are a few constants that hold her together, and held MY heart, too.

For the first time in a very long time, I felt like I had family.

You do not know how fast you have been running, how hard you have been working, how truly exhausted you are, until somewhat stands behind you and says, “It’s OK, you can fall down now. I’ll catch you.”

So I fell down.

Oh… don’t get me wrong. This woman does not consider herself a victim (although she is at times, victimized and villainized). That said, she has her priorities, deals with them accordingly, knows exactly what she wants, stays focused no matter what, and always finds a way to get it. Her life is a series of successes and failures, both professional and personal, but it’s in her retelling of it, that it all comes to fruition. It all comes full circle. And boy is it turbulent.

And that’s where I’m ending it. Does it end well? Is there an HEA? My lips are sealed 😉

But I absolutely recommend reading this if you’re into amazing writing and raw yet poignant storytelling.

4 stars! <— Honestly? 5 stars for the writing and storytelling, but since I FIVE-star loved a few of this author’s other books like CRAZY (two that had me in tears and in hysterics and in emotional ecstasy), I’m being a bit more selective with this one even though it is SO good and most will absolutely love it!.

➔➔➔ Love this author? Check out more of my Taylor Jenkins Reid features and reviews on my blog! 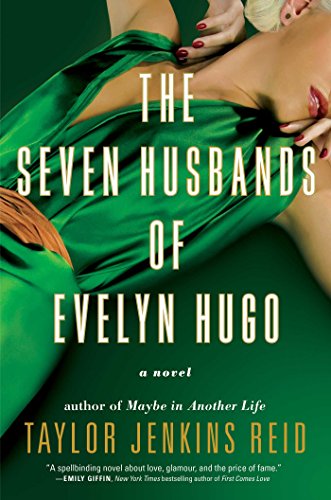 So, does it seem like she is based on any one? A Lana, Ava, Rita, or Liz? They were all married multiple times. Liz and Rita definitely married into famous families. Liz a Hilton and for awhile she was villified.

I think she’s a combination of many starlets. Unfortunately I don’t know much about the real-life actresses and their histories (other than the fact that Elizabeth Taylor was married multiple times), so I wasn’t able to “recognize” one in particular.