This Side of the Grave (Night Huntress, Book 5)
Well…. I liked it. It was great to be back with the whole crew, and having Bones and Cat as the main focus was a plus. I cut my “paranormal teeth” (so to speak), on Cat and Bones, so I have a great fondness for these characters. This book had some SERIOUSLY outrageous, laugh out loud moments. Stuff that had me giggling and incited me to squee with glee about it with my fellow reading friends. And of course, Jeaniene Frost’s signature steamy scenes (well, only one of those, but it was very… inspiring 😯 )

But here’s the thing. I was able to put it down. While I usually devour her books (even the spin-offs), I found I was taking my time with this one. I never developed that sense of urgency. I never felt that pressure in my chest, that craving that could only be relieved by more reading. And the butterflies in my stomach (both the terrified kind and the “weak at the knees” kind) were few and far between. Mind you, Mencheres still makes me crush badly (how hot is he!!?), and Vlad, well, he had me at inflamulation 😛

Much slower, I turned around to see Vlad examining his fingernails, as if his hands weren’t still ablaze in the flames that had blasted the ghoul’s head off moments before.

“What the hell was that?” I gasped.

“Premature inflamulation,” he replied. “Happens sometimes. Very embarrassing. I don’t like to talk about it.”

Okay…something about that scene just makes me hot for Dracula 😳

So the story goes like this. Cat is still considered enemy#1 by many, and this book’s villain “du jour” is a ghoul named Apollyon who intends on starting a race war between vampires and ghouls. He’s promoting Cat as the reason for needing to battle, stating that her many “weirdnesses” (she’s never been a typical vampire) will have a devastating effect on Ghouls, with the potential to enslave and control them all. Thing is, we find out Apollyon’s got a long history of causing such uproar, and well, there’s always more to the story, now isn’t there?

Cat is still coping with her ability to absorb certain “skills” from the blood of other paranormals. She’s extremely powerful… in spurts, and not very good and wielding the powers she drinks in (literally).

I’d thought changing from a half-breed into a full vampire meant an end to my uniqueness, but fate thought differently. I woke up on the other side of the grave in possession of two things unprecedented in vampire history – an occasional heartbeat and a craving for undead blood. The side effect of the latter meant I temporarily absorbed power from the blood I drank, much like vampires absorbed life from human blood.  That was all well and good, but if I drank from a Master vampire, I also temporarily absorbed any special abilities that Master had. This was great when it came to enhanced strength, but not so great when it came to other abilities that were out of my depth of control.

This secret she carries could be very detrimental in how she is perceived by other paranormals (possibly even her own kind), and especially one in particular that makes us wonder who the real villain is.

“I don’t know why ghouls would listen to Apollyon about me being a threat anyway.” I muttered. “I might have a wacky diet as a vampire, but Apollyon can’t tell people that I’ll combine ghoul and vampire powers anymore. Changing over took care of paranoid rant from him.”

Bones’s stare was sympathetic, but unyielding. “Kitten, you’ve been a vampire for less than a year. During that time, you’ve blown the head off a Master vampire through pyrokinesis and frozen dozens of vampires into a stupor through telekinesis. Your abilities, plus your occasional heartbeat, are bound to frighten some people.”

So here she is, stuck in yet another mystery to solve (good for us, not so much for her), and another battle to live through (let alone win). She begins to come to terms with the fact that her undead life is always in peril, and her time in this world, is limited. This new outlook has her examining her loved ones differently, realizing that she should not take her potentially long life for granted, appreciating her time with them. She slowly changes focus on what’s truly important, opening herself up to real connections.

He wasn’t just stronger than me physically or in power abilities. Bones also left me in the dust when it came to inner strength, daring to show his deepest vulnerabilities without any fear, safety net, or rationalization.

And it was high time I followed suit. Sure I’d bared my heart to Bones in the past, but not nearly enough. He knew I loved him, knew I’d fight to the death by his side if need be, but there was more to it than that. Maybe some hidden, fragmented part of me had feared that if I admitted to Bones how much he truly meant to me, then I’d be acknowledging to myself that he had the power to destroy me more thoroughly than anyone, even Apollyon or the vampire council, could. All the rest of the world could only kill my mind and body. Bones alone held the power to demolish my soul.

From the many close calls on her life since meeting Bones, she realizes being “undead” doesn’t mean she’s completely immortal. Her new paranormal body may be harder to kill, but her mostly unbeating heart still feels very human to her. And while it may still need guarding, she realizes she’s been guarding it against the wrong people.

These are the moments I enjoyed most in the book. A momentary crisis of consciousness, Cat’s self-analysis as she contemplates who she was, who she is becoming, and who she really wants to be.

“As long as your with me, I can handle it, ” I said, reaching up to touch his face. “I can handle anything with you.”

“I’ll always be with you, Kitten. Always,”

Ok yup, I loved those moments, and of course, the many hilarious Vlad “tension-relievers” that remind us of why we love these characters like we do 😉

Generally speaking, this was not my favorite. Despite this fact, I’m still a HUGE fan of Cat and Bones, and look forward to future books in the series with great anticipation. While this may not have been my favorite in this series, it was still really good. Another in the series (One Grave at a Time: A Night Huntress Novel) will be released this August 2011 (YAY!! We are being spoiled!!) 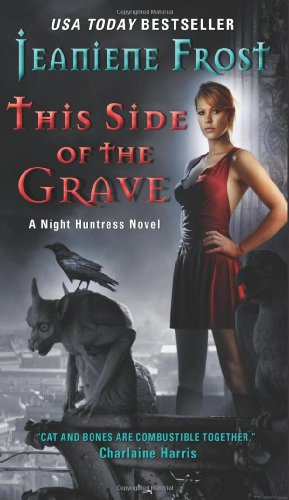