I am absolutely LOVING this series. I wasn’t certain I was in the mood for a silly fun female vampire series, but it is suiting me nicely! We’ve got laugh out loud moments, a nice romantic conflict, a sexy strong Vampire king, and some danger that never gets too intense.

This particular book looks into the life of the “newly” made Vampire “Betsy” (real name Elizabeth Taylor), who doesn’t think her “undead” status should change her life from how she used to live it.

Betsy, a slightly underachieving “girly girl” fashionista, was attacked and bitten by multiple “somethings” and after a trip to the hospital, was released. Shortly thereafter, she was hit by a car, and killed. Shortly thereafter that, she rises from her coffin, at the mortuary, before her funeral, and decides to visit her family and friends, to let them know that she is not really dead (in fact, she has just discovered she is a vampire, but all is well, let’s get back to living!).

Her mom and best friend are thrilled and accept her for what she is, her father and his conniving wife are appalled, and request that she “stay dead” since this is an abomination.

Head strong, and slightly air-headed (despite being extremely witty), she shrugs off the reactions of her entourage, and continues on with her life (Why not? She can go out in sunlight, religious artifacts do not affect her, and in fact, she is not deliriously blood thirsty). She becomes annoyed (yes, that’s pretty much her reaction, she is rarely fazed but much) when she is kidnapped by vampires, and explained the “rules” of the undead (secret underworld, feedings, etc.. etc..). She doesn’t buy it, and doesn’t need it. The vampire society are shocked when they discover that she is not a “typical” vampire, and astounded by her disinterest (and bold refusal) in joining them.

One gorgeous male vampire (Eric Sinclair) is intrigued (there is *something* very special about her vampirism), and he pursues her aggressively. While she cannot deny her attraction to him, being the independent stubborn girl she is, she rebuffs his every advance.

While, on occasion,  I do find her confrontational nature with Eric to be somewhat irritating, and mean-spirited, (hey I like Eric, I can’t help it), it is fun to have a bit of romantic tension that they do not so easily yield to.

Here is a funny situation where her new Vampire “team” tries to bribe her to help them against the evil Vampire “Nostro”, with designer shoes. Eric says:

“I saw your shoe collection when we were at the house the other night, and had my ladyfriends do some shopping while we slept. Mitzi sends her regards.”

I made a mental note to check the rest of the shoes for scorpions. “These are so, so pretty! Amazing!”

“What a pity you can’t keep them.” Sinclair sighed theatrically and motioned to Dennis, who started putting the lids back on the boxes.

“Well…you’re so adamant about not helping us. Not being a kingmaker, as you put it. Very wise and practical, but of course useless for our purposes. Thus, Plan B must be put into effect. Perhaps Nostro will accept these as a token of peace.”

Nostro? Nostro putting his nasty clammy finger over the buttery soft suede, the delicate embroidery? Giving them to Shanara? Using them for Fiends to play fetch? Never, never never!

“Don’t touch! Bad vampire!” I snapped and Dennis froze in mid-reach. “I’ll help you. And I get to keep the shoes.”

“Done and done,” Sinclair said, his lips twitching as he tried not to smirk. I’m sure he thought I was vain and weak-willed and a complete idiot. Who cared? I was a vain weak-willed idiot with the season’s coolest shoes.

The whole book is witty like this! So many scenes that had me giggling. I loved it, but I loved the next two books in the series, even more. Ms. Davidson was on a writing roll, the further into the series she got!

More reviews to come. I’m off to read the 4th in this series (I’m completing one a day, as they keep me interested enough to read them right through). 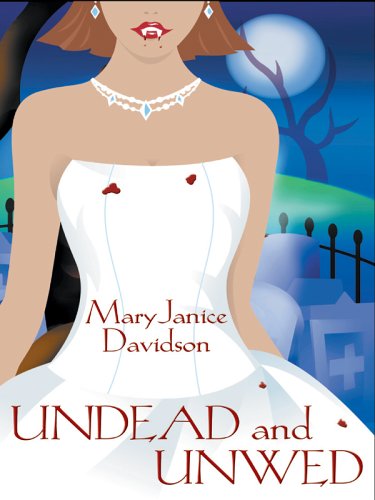 , ,I have just finished Undead and Unwed, after reading other books in series. found series very entertaining. Only one criticism of Undead and Unwed. In 1700, there would NOT have been a ship called HRH QUEEN
ELIZABETH I. One day, there might be another monarch of the UK, called
John, or Victoria, but we do not at present, say King John I, or Victoria I .
]