Veiled Innocence
Fun!! Well… maybe not always so fun for “them” 😉 (you know the trouble that comes with these risqué teacher-student liaisons *eeeeep!!*) but PLENTY of fun for us! An easy read (albeit fraught with tension), and a perfect example of that slightly taboo read (but not too taboo, ’cause, at least she’s 18). But I had an urge for OMG WHOA!

… and this one delivered. It gave me that “bad-girl read” rush!

And most of you that know me ‘n my “bad-girl read” needs, probably already figured this would ping my radar. Considering how much I enjoyed this author’s other “risqué” read, and hearing she released another “taboo-style” story… well. I was bouncing in my seat, giggling with glee. There may have been clapping.

But it’s when I received these comments, that I moved it to the top of my TBR list, and jumped right in.

Emily: Veiled Innocence was AMAZING!!  I may just venture out and say that it’s the BEST student/teacher I’ve ever read.  😉

Stella: I just finished Veiled Innocence. FANTASTIC read!  I think i’ve read 3 other student/teacher reads and i agree with Emily. This one was my favorite.

WHOA! Right!?? Does that not make you want to experience this forbidden romance, or what?! *oooooomph* I was so IN!!!!

Addison is beautiful, popular, and the star of her high school track team. She seems pretty much… perfect, and she always gets what she wants and never has to chase it.

Flirting to me was like breathing to everyone else, and I always made sure I had their attention when I put on a show. As the school’s track champion, I strived for perfection, and I liked seeing the results of my efforts. I was their role model, their person to admire – and to hate.

Everyone, including the teachers, knew me and everyone loved me. Except for the man standing in front of my world history class.

Yep. Her world changed when her new (and very handsome) history teacher showed up.

Then the door opened for the final time that morning and she stepped into my classroom. Late.

My ending, staring right at me from the very beginning.

… and the extreme resistance on Mr. McKendrick’s part. Addison proves to be… the insistent one. The persistent one. And she won’t take no for an answer.

“I’m not worried. I’m appalled. Appalled that someone as bright as you feels like she has to throw herself at people to get attention. Not only boys, but someone my age.”

She goes above and beyond making her attraction known (regardless of consequences).

… what I was going to say to this student of mine.

They both sounded ridiculous, and I realized at this point the word please needed to be thrown right out the f%&king window.

Polite wasn’t going to work with Addison Lancaster. It was time to get serious, maybe even mean, because this girl had the ability to destroy me.

We get all of that initial sexual tension, mixed in equal parts with her teacher’s extreme fear of giving into her intent seduction. Her nonchalance at what could happen to him in the long run, and his logical realization of him being seen as a “sexual predator” has him fighting her tooth an nail. And has him outraged!

Yep… my legs were bouncing, too! I was wayyyyyy too… er… tantalized.

And what made this one even more special was the element of mystery. Two “mystery twists” in fact. There was “something” from Addison’s past that proved to the reader that her “perfection” was all just a cover. And as her secrets are revealed, the reader finds out what makes her “tick” (you’ll get that reference soon enough).

But that’s not the only mystery, and it was the “second phase” of this story that had me guessing ALL sorts of things. There is nothing better than thinking “I know” some crazy twist or angle, and finding out I was right. Nothing better than that… other than realizing I was wrong. When I’m wrong? <— Now THAT is my favorite!

“You’re going to be the death of me.”

Life is full of ironies, because with him, I’d never felt more alive.

And I’ll leave it at that, letting you pursue this taboo-y love story on your own (if you dare). Just know that it’s not for everyone (specifically because of the “teacher-student” love affair). And while I’ve enjoyed plenty of ’em in the past, (er… I mean… BOOK teacher-student affairs, not real life ones <—*blush*!!!), even I had my reservations once secrets were revealed in this one.

Did I love it? Pretty much!

Okay, if you haven’t read this book yet, skip this next part. I don’t “spoil” it per se, but I analyze… stuff. You know how it is. 😉

I did have a few needs that had there been “more of”, might have made me connect that much harder. Such as the resistance aspect… maybe a little longer. Tease me to the point of driving me (as well as the main characters) absolutely, deliciously crazy. Ohhhh it’s there. Believe me… butterflies a-plenty! I just wanted more of that agony. And the “giving in” aspect? Maybe a little more risky. Scary (in terms of circumstances). More of that. As well as more private, intimate moments. That personal intensity? While the lust was there in spades, I wanted to feel that soul-deep connection to the point of happily wanting them to abandon all reason, consequences be damned, you know?

That, and a few “mental health” issues that I know in reality… well. Yeah. In reality? This has disaster written alllllll over it, pretty much no matter how you look at it. In the book? I’ll let you find out where that potential for disaster leads. 😉

OKAY you can come back now!! 😀

A very good, poignantly written book that tickled my taboo-bone, and kept me thoroughly entertained. Practically unputdownable! Have I mentioned the off-the-charts (and eeeeep-worthy) steamy scenes? No? Well, now I have. You’re welcome! 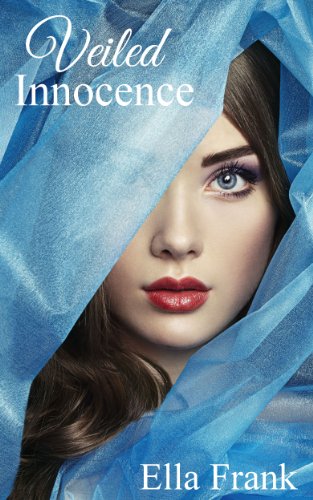 Great review, Maryse. I really liked this one as well!n

I loved the psychiatrist, too Melissa!! I was actually surprised by a few things “Doc-wise” but I enjoyed him.

Maybe the next one? 😉 I’ve got to choose a new read, so who knows what’s next for me.

I loved this book. A great read that I couldn’t put down. One of my favourites this year.

Aw man, I could have taken that first sentence and run with it had you not clarified it!! 😛 Nailed it perfectly with the review. 😉

Great review Maryse! I finished reading this book at 3 am….I had to get to the end and just kept flipping pages. Thought I had it all figured out….a couple times….but I didn’t. If it didn’t end the way it did I think I would have been upset. Definitely tons of lust in this book as opposed to love, especially in the beginning….. Some really hot scenes! I really liked it! Now onto Vichous’ book…yay me!

I love Ella Frank books, but this one, sadly, didn’t do it for me. I think I’m done with the premise of the high school girl and the teacher. I was not a fan of Good either like most. I think it’s the maturity level of the girl (immature) which drives me batty. I’m on edge the entire time because they ALWAYS make the same mistake I don’t want to say… It just didn’t feel unique enough to me and the end felt trite. The psychiatrist was the most redeeming character for sure!… Can’t find what to read next. Maybe “Forbidden”? Can’t wait for the ones coming soon: Love In English, King, Alpha and Sweet Filthy Boy!!

I’m with Melissa and Marina on this one. Could not get into it.. found myself repulsed at their relationship, and honestly couldn’t understand how he could be into her. Both of them were odd and their intensity kind of came out of nowhere. I was hoping it would turn around for me at some point… nope 🙁

Wow, loved this book! A forbidden romance, but a romance that was so so right!