Sugar Daddy
I decided on this one when a certain paranormal book I was anxious to get to wasn’t completely hooking me. I’ve been having a difficult reading week since reading Sylvia Dare’s Bared to You (flitting from one book to the next, not fully connecting with anything), and when this series was brought to my attention, I thought it just might do!

It looked promising! And as I tried my hardest to connect to a paranormal book I had just started, this one kept calling me. Not that my paranormal was bad (it wasn’t, and I’ve been told it, too, is amazing), I just needed something more “real” to help get over my “Bared to You” hump.

Sandra: In zombie mode, halfway into Sugar Daddy…..love it!

Maryse’s Book Blog: … me too!! I just put down a paranormal that I wasnt meshing with, and I think it’s ’cause I just had this deep-seated need to read this trilogy. I’m loving Sugar Daddy…

Sometimes, no matter how much you like a certain genre, if another book is lingering in the back of your mind, or you’re in the mood for a different kind of story, it’s very hard to stay focused on anything else. So I just go with the flow, change my TBR list until it meets my current mood., and this book won out.

So this one’s about the heroine’s development from young teen to her early twenties. But it’s not a “fluffy” childhood. Liberty is being raised in a trailer home by her single mom, in a tiny town in Texas. She meets new friends, and specifically one. Hardy (always two years older and two steps ahead of her).

… it was a forgone conclusion that boys like Hardy were never going to notice me.

Their friendship is sweet at first (after all, she’s just a tiny fourteen year old) and he takes a more protective stance towards her well-being. Like a brother, he takes to her instantly. And as their friendship blossoms, she is warned (even by him) that he’s trouble.

“You’d best not run with white trash like the Cateses, little girl,” Sadlek called out after us. “They’re trouble. And Hardy’s the worse of the lot.”

Living in even more poverty that she, Hardy has had to grow up before his time and has big plans. Through her teen years, Liberty has a fairly ordinary high school existence, but her one constant struggle is Hardy. He’s always there for her, helping, but never there for her the way she wants him (despite their obvious, eventual, emotional connection).

I wanted to step deeper into the shadow until I met his body, to feel his arms go around me.

“Sadlek was right, you know,” he said.

As the years progress, Hardy leaves their small town for bigger and better opportunities.

It was pretty obvious this was the last I’d be seeing of Hardy Cates. There was no use in asking if he’d ever come back for me. I had to let go of him. But I knew that as long as I lived, I would feel the phantom-pain of his absence.

And amidst her heartbreak, Liberty’s young adult life takes a turn for the worse. Having to cope with a devastating circumstance, she finds herself having to adjust quickly. Suddenly faced with huge responsibilities, this book will take you on Liberty’s journey of disappointments and successes. From her teen years (first half) to her life as an adult (second half). Of new friendships forged, and sometimes even more bad stuff to throw her for a loop. Some of it, real bad. And real loopy. And all the while… Hardy lingers in the back of her mind, and continues to occupy a large portion of her heart.

This book definitely had it. Almost enough of it. Alpha men, deep emotional unrest, tearjerking moments, and the “too good to be true” circumstances, and lots of secrets. A past coming back to haunt her. I didn’t want to put it down, and the emotional angst and yearning were front row and center. I had to know what the “big” secret was. I also had to know if her heart would ever be complete again. The book played with me, kept me guessing, and overall, I really enjoyed it.

Unfortunately, I wish there was more of what I was wanting, more of what I was fully enjoying, and less of the buildup towards it. Actually no. The buildup towards it was necessary for my ability to connect with the integral “life” of the character and her surroundings. Her life stages, development, growth, trial and error phases of her life. I love when I get to know a character like that. I like when I get to feel her apprehension, her insecurities and her realizations as she constructs the pathway to her future. However… this was a romance book, and while the romance was intense at times, and was certainly one of the most important aspects of the book, I found that there wasn’t enough of it. Had there been as much of that angle as their was of her own “life story”, I would have likely given this 5 stars.I felt the ending was somewhat rushed, and while I connected with the romance aspect, there could have been more time afforded to the potential heroes in the book. To the lazy languishing, to the romantic indulging, to the emotional turmoil (because believe me… there was definitely potential for heart wrenching moments and reflection). It was there. Just… not enough. The hero (or heroes) were swoon-worthy. Sufficient for me to get butterflies, to feel her apprehension, and to feel her restlessness. But… just not enough for me to go absolutely crazy over it.

Interested in the series? It’s a trilogy!! Here’s the reading order guide: https://www.maryse.net/reading-order-guide/lisa-kleypas-the-travis-series-reading-order.html 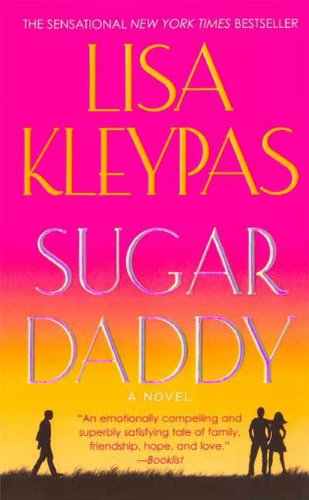 I wanted to like this book because I had already read Smooth Talking Stranger (Jack’s story) but I just couldn’t… I wanted more of Gage and it just felt like there was more Hardy build up than anything and all that build up in my mind had me wanting her to end up with Hardy. I haven’t read Blue Eyed Devil and probably won’t because of what I know Haven goes through but Jack’s story is fantastic!

It’s been awhile since I’ve read them. Sugar daddy was good a little long at times but still good. I really loved Blue Eyed Devil, it was so intense in the beginning I couldn’t put it down. Plus I got hooked on Hardy in Sugar Daddy that I had to find out how things played out for him.

Me too, more of Gage… he was a great character and I loved how difficult the whole situation was, when it came to him. But agreed, there was not enough of him.

my favorite was Blue Eyed Devil!!! so so good!

I have this book, but I haven’t read it!

Maryse – I totally agree. It felt rushed at the end. After all the painstaking detail laid out in the first, oh, 70% of the book, the rest just came too fast. I didn’t know what this series was about, so when I finished book one, I hurried on to book two to continue with the main couple, and was disappointed to find out that they were “done.” I mean, they do make appearances in book two, but I really felt their story had so much promise and it was just left “undone.” That said, I did enjoy book two after adjusting my expectations. Can’t wait to read the final one.

I know how you feel,I to just finished( bared to you ). and found it very hard to read any thing ,I Loved that book. so decided on (Law Man) by your girl Kristen yea feel my reading comin back to me.thank you kristy. 🙂 ps Mitch is no Gideon but he will do.

Sugar Daddy is my least favorite of the three books. It’s almost more women’s fiction than romance. However, I LOVED Smooth Talking Stranger and Blue Eyed Devil. They were much more like traditional romances in structure and the heroes are yummy.

YAY!! Very happy then, to continue with the series. I definitely like a little more romance *oomph* 😉

By accident I started with Smooth Talking Strangers and it was my favorite! Jack is yummy! 😉 He was more the ‘aggressive’ (‘alpha’ type) male I was looking for in the series… okay, maybe Hardy was more, but Jack just wouldn’t let his woman go and I loved that. Are these your Kristen Ashley books with mega-alpha males? *sigh* No. But, they are good quick reads with satisfying characters. Enjoy! 🙂

(Sugar Daddy was my least favorite).

Agree with all the comments. This book set the tone for Blue Eyed Devil–it was my favourite of all the series and I guarantee you a 4-star.. if not 5-star rating from you 🙂

Awww all of you guys made me so happy!! I will be moving onto #2 this weekend. YAY ME!!

I made the big mistake of reading the blurb of the second book. So now i know who she ends up with, and i was thinking this one would be Hardy and now i don’t know if i want to read it anymore.

Read Bared to You after your review/recommendation. Now I too cannot seem to get into another book. I’ve started 3 books. Crazy?!?!?!?
But I recommend reading Reason to Breathe. Book 2 “Barely Breathing” out May 1st. I just re-read it in preparation for May 1st. So heart wrenching and emotional. Looking forward to Barely Breathing by Rebecca Donovan.