The Darkest Kiss (Hqn)
Hrmm…. good, but not overwhelmingly good. I wanted to finish it and I enjoyed the story progression (lots of little side things going on), but I found my self easily setting it aside. That first kiss had me swooning (I LOVE a resistant hero). But…. I didn’t fall in love with Lucien. I blame Anya for that. Maybe it’s cause she’s already an immortal female, and I’m jealous of ’em. Yeah, yeah…. you already knew that 😉 After two years of reading this genre, I’ve deduced that I prefer books with male immortals (of any kind) who fall for mortal females. Plain ol’ human females, or *special* humans are good too. I can relate to ’em a little more. Okay… perhaps I’m being a *little* catty.

My issue was that Anya felt too modern (and hard-headed) for a male like Lucien. Then again, this might have been the only personality-type to succeed in pulling him out of his hardened shell. She doesn’t take no for an answer, and has no shame in rejection (well, outwardly, at least). She’s persistent, to say the least.

Lucien, is pretty much the leader of his group of possessed immortals, and he has a large burden to carry. A respectful, seemingly traditional male yet so quiet and introspective, and just so … sweet? No. Not quite the right word. Serene, peaceful and sadly, insecure.

“Do you find it amusing to tease the ugliest man here?”

While she definitely showed him she was into him and ONLY him (good!), I found myself cringing, and wishing she would tone down her obnoxiousness around him.

Did he truly have no idea of his attractiveness? He radiated strength and vitality. He exuded savage masculinity. Everything about him enthralled her.

“If you know what you are, sweetness, then you know you’re sexy and deliciously menacing.”

Hrm. On second thought, sounds like my kinda guy… 😉

Now don’t get me wrong. I like her, and okay, I like them together *now* (after I learned her own sad story). But it took me too long to warm up to them, and by the time I did, the book was over.

Their story? Well, Anya is a goddess of sorts (born to a promiscuous mother with a taste for married gods). Anya (her daughter born of one of these trysts) was cursed (I’ll let you learn what it is yourself) by an angry goddess-wife. Her mother, despite her reputation for being a… ummm… *easy* taught Anya to be true to herself, and have pride in who she is. Not to bend to what others expect her to be.

Whatever you do, however you act, they are going to judge you harshly, the goddess had said. But we all must be true to our own nature. Acting as anyone other than yourself merely brings you pain and makes you appear ashamed of who and what you are. Others will feed off that shame, and soon it will be all that you are. You are a wonderful being, Anya. Be proud of who you are. I am.

I liked the message. Anya is who she is, and she’s going with it.

Lucien’s story is quite sad. He once fell in love with a mortal female, and one day had to escort her soul to heaven (he is a sort of “Death Angel”, escorting souls to Heaven or Hell). Her loss was devastating to him, and he delayed her death causing further torment for both of them. He taught himself a lesson, and has been living in guilt and sorrow ever since. Of course, the happy, go-lucky, extrovert character that Anya is, helps ease him back into the world of the living.

But can they ever truly be together considering her curse, and Lucien’s fear of love? To top it all off, she carries something very important within her. Of course, the gods want that too (and well, they might as well kill her off while they’re at it). Annnnnd, as luck would have it, they have commissioned Lucien to carry out the act, or his loved ones (the other Lords) will suffer the consequences.

He’d thought, She cannot die. Unlike a mortal, she cannot be taken from me if I indulge her. I will never have to take her soul.

What a fool he’d been. He should have known better. He was Death. Anyone could be taken. Himself, his friends. A goddess.

So there you go. The story of two would-be (and unlikely lovers) that have an exhausting adventure (cause you know, the Lords of the Underworld have to find Pandora’s Box and all that goes along with that), fight “Hunters”, try to apease the Titan gods, and literally run from each other (both emotionally and physically). Cause when it comes to Lucien, it’s kill or be killed (for Anya). Oh the complications of falling in love with your own personal grim reaper who’s been commissioned to take you out 😉

Oh! And Paris is in there too! He has a little adventure of his own. *sigh* Paris. I’ve already started crushing on you. Figures, right? By the way, no worries, I’m almost done book#3 and am loving it! Reyes… Paris. All of them. WOW!

Interested in the series? —> Gena Showalter – Lords of the Underworld Series Reading Order 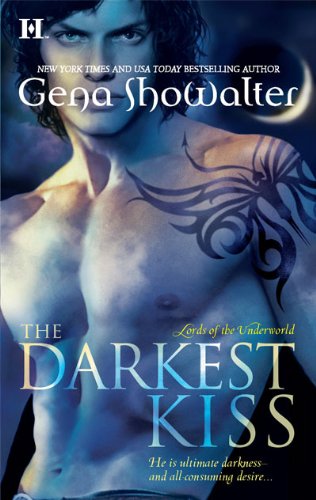 I feel the same way. I did just put this one down and started another book, hoping I’d get into this more after I took a break. I loved the first book.

I absolutely LOVED Lucien….of course, you know he broke my <3 from the beginning so I had to have him..*hehehehe* Glad you're finally reading these and I just knew you'd love them 😀

well ok, “he broke my heart”

I loved Lucien…but I’m really hanging out to hear Torin’s story and to get to know him better.