X
You are here: Home / My Book Reviews / Guest Review (my sister!!) – Foreigner by C.J. Cherryh

They land and establish the laboratory in an area where they think there are no people living close by, but they are wrong and first contact… well, it rapidly leads to war, both parties not understanding each other… written many many years ago, this is so realistic!

Two hundred years later, humans are still constricted to their island and only one human, who is chosen between a bunch of others going through a special training, can live in the “Atevi” community. He is the link between the two worlds, serving as ambassador and a scholar to collect information so that the humans get to understand this world better. Bren Cameron, one of those “paidhi”, is doing his best, thinks he’s doing a good job, but there is so much more about the Atevi that he does not get at all!

How would you feel being alone in a world of giants with expressionless faces, hardened features and raven colored skin, where there is no word to translate “friend” but more than 10 for “betrayal”? Where it is OK to hire assassins from a specialized guild to kill someone? Where associations shift like the wind? Where you have no clue if signs of friendship are really that? But Bren Cameron loves those people even if they don’t get them.

This novel is full of surprises, action, diplomatic intricacies and more!!! One thing I LOVED are the macheiti, beasts that Atevi use as horses but also as soldiers because those beasts can attack with their tusks, their hoofs, and their teeth, making a mush of their enemies. They hunt too! I want one soooo bad! All black and so huge because they can carry an Ateva, whom look at Bren Cameron and think he is the size an Atevi kid.

When you live with humanoids who do not show their emotions… who seem to have NO emotion, how can you get a love story going… well you don’t for now… but I believe something is going to happen soon!!! Oh, in this book, you meet Ilisidi, the strangest granny I’ve ever met, but, damn it, I love her!!!

If you take your time learning all the new strange words and names, somewhat close to Japanese culture, then you’ll have a ball reading this book.

C.J. Cherryh wrote more than 60 books and she knows how to build a world, a culture and play with diplomacy and emotions in a way that makes us suspended to know more. Can’t wait to follow Bren Cameron’s adventures in the next book! Damn I’d love a macheiti! 😉 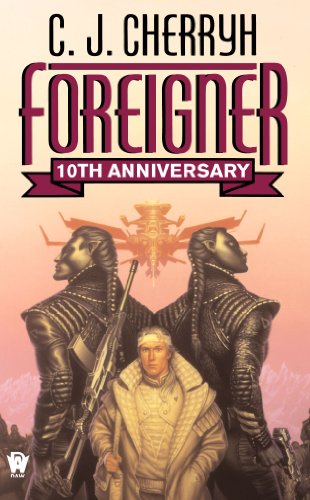 Thanks Johanne. I think this book is one of those oldie but goodie sci-fis. I’ve never read it, but have seen it referenced many times. I’d like to read it some day. But my tbr is already exploding out of control, so don’t know when……….

I’ve heard this one mentioned a few times in my recent reading history, Jan. So when my sister said she was loving it, I was thrilled! 😀