Pleasure Unbound: A Demonica Novel (Demonica series Book 1)
I am already loving this series. With just one book, I have bonded with the characters, and I’m as intrigued by the other two brothers, as I was with the main character. I care for every potential developing relationship, and can’t wait to see how they play out.

This book is about a demon underground world that is merged but well hidden within the human world. Demons, in this series, can be a multitude of creatures (from vampires to ghouls, to Incubi to shape-shifters). The Demon world has it’s own set of rules, and laws, and while the different species do not always get along, there is one place where all species are safe and treated without prejudice. Eidolon, a handsome, skilled doctor, and also a “Seminus Demon”, has set up a special hospital (identical to any human hospital – equipped with doctors and nurses, ambulances, and EMT professionals) for the underworld.

All demons are hunted and killed by human warriors (Guardians) that are part of a group called the “Aegis”. They are trained highly skilled fighters, and have an enormous arsenal of weapons to aid in their killing quests. They believe they are killing for the good of mankind, and protecting the human race, and kill any and all demons indiscriminately.

A wounded human Aegis fighter named Tayla is erroneously brought into the demon ER. The hospital staff are concerned and want to dispose of her (considering she IS the enemy), however Eidolon’s fair nature and indiscriminate need to save lives, protects her from being killed, and instead, he heals her. Not realizing that she is in an actual demon hospital, and unaware of the true nature of her doctor, she finds herself deeply attracted to Eidolon. She soon discovers the truth however…

She gaped. “Your species looks like Playgirl models? It’s not fair.”

“You. You’re a demon. Evil should look…evil. Ugly. Wouldn’t hurt if you smelled bad either.” Heck she’d be happy if he just didn’t smell good. The air around him smelled faintly of spiced dark chocolate and man, making her mouth water and her libido kick into high gear.

She snorted. “All demons are pure evil.”

“What about half-breeds. Are they evil, too?”

“They’re abominations that deserve to die the same as any other demon.”

He turned and looked at her wearing a grin that was about as evil as any she’d seen. “This is going to be fun”.

Sparks fly (whether they are entwined in a lusty encounter, or whether they are battling  each other). A few instances force Tayla to interact directly with Eidolon and his entourage. Her loyalties are put to the test as she begins to acknowledge that not all demons are evil, and finds herself caring for those of a different world. Tayla also discovers that her Warrior entourage are not all that they seem, and may not have the noble intentions she thought she was fighting for.

Eidolon’s own anger flared bright and hot as he rounded on the cause of the tension between them. “You came here to lead your Aegis colleagues to my hospital.”

The betrayal streaked through him, and he had no idea why. They were enemies. He’d expected something like this. But for some reason, the knowledge that she’d wanted to destroy what he’d worked so hard for tore at him.

“I don’t need to ask why. That you hate us is obvious-”

For some reason, this is one of my favorite scenes (kind of fiery but sweet at the same time). Tayla needed protection, and Eidolon took her in:

“This is your room,” she whispered. “I saw a guest room back there…”

He dropped the bags on the polished wood floor and in a flash, framed her face in his warm hands. “We’re beyond that.” He brought his head down to her neck, his lips caressing her skin. “You sleep with me.”

Like a real couple. Way too intimate. “I don’t want to.”

He inhaled deeply. “Don’t lie to me Tayla. I can smell your desire”

God, that sense of smell of his was a pain in the ass.

What I love about this book, is that we are introduced to many different characters, their feelings, their struggles, and while Tayla and Eidolon are the main focus, there are many short but deeply focused side stories that allow us to bond with all the characters and their world, and to understand them on a larger level. Each character has its own personal struggles and revelations, all seemingly real, and valid. While the main love story brings it’s own angst, each character (including Tayla) has a deeper issue that is more personal then just that of a potentially doomed love story.

Vampires may not be the focus in this book, but it captured my attention and I had a hard time putting it down. While the romance and intimacy is prominent, this book is also action packed, and a great read! I’m still quite exhausted from my late night of reading (but this story was well worth the lack of sleep). 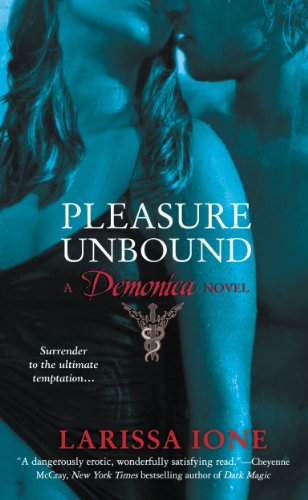 This is one of my favorite series. Nothing in the series disappoints! I can’t wait for Ecstasy Unveiled!

Amazing series. I have up -to date- current completions of Sherrilyn Kenyon, J.R. Ward, L.A. Banks, Cassandra Clare and Stephenie Meyer and I also have all of Larissa Iones books as well and I must say that I find her writing capability as high as J.R. Wards and Cassandra Clares. Highly captivating reading material. 2 thumbs up

Ione is a new author for me. And, I picked it up based on Mary’s book review and the comments on this site. I gotta say, I am totally engrossed. I love this book! And am now looking forward to reading the rest in this series. Thanks for turning me on to a wonderful new author!