Afterlight: The Dark Ink Chronicles
Hey Guys! Good to see you back! I’m still embarrassed that I lost the keys to Maryse’s place and locked my keys in my truck. *sigh* I would lose my head if was not attached. I am so excited about camping out here this week! I forgot to get an air mattress, but I’m sure that won’t matter right? I did remember to get blood though. Small problem. Do you know about mosquitoes? I really hate those little effers. As soon as I open a bottle they act like it’s open bar. I don’t care for them.

OH! Speaking of blood that tastes really good let me tell about Afterlight: The Dark Ink Chronicles by Elle Jasper. You know I like books that take the vampire thing and mix it up, and this is exactly what Afterlight does. We are introduced to Riley Poe, a hardcore, post drug addict, tattoo artist who is doing her best to raise her little brother, Seth. Oh, and she is full of Gullah magic. If you have no clue what Gulluh are, they are found in the Southern United States but keep old African magic ways and they have their own language. It’s sort of like Creole. Sort of. The Gullah magic makes her blood super tasty!

After Seth and his friends decide to go to a cemetery and act foolish, they unleash something that was hidden for a reason. These young boys have unleashed a horror upon historic Savannah and don’t even know it.

When her brother begins to act erratic and his friends take the creep level through the roof, Riley begins to wonder what is going on. As if that isn’t bad enough, Riley knows she is being followed by someone, and this guy is STRANGE. Then he suddenly jumps in, saving her when she didn’t need to be saved. Then he proves he’s nuts:

“You’re too careless,” he warned. “Those punks outnumbered you. They could’ve hurt you.” He drew his head closer, and I could barely see the outline of a hard jaw, shaggy hair. He looked…..familiar. “I could hurt you,” he said, his voice deathly quiet.

Then he tells her the words she needs to hear, he knows how to help her brother. She doesn’t trust him, too many bad things have been happening with him around.

“What are you?” I said, my voice strong but shaky. I kept my eyes boldly trained on his as I awaited an answer, and I vaguely noticed the flinch in his expression at the word what.

“We are vampiric, but not like them,” he said heatedly, under his breath, and it was the first time I realized the slightest trace of an accent was French. The muscles in his jaw tensed, and again my eyes were drawn to his full lips. “As my father said, we made a contract with your brethren. They have sustained our lives, and we have protected the city against rogue vampires.” With his head lowered. “But the Arcoses have been freed, and now we have a major f*cking problem, ma chere.”

Why, oh, why are there always major problems???? Sherry, from Facebook, told me I should read this because it has a Fever feel to it without making you work as hard to get the good stuff. Well it does, and as amazing as Eli was, I just likedhim. He didn’t “Barrons” me. When he was sneaking into her room at night I was terribly annoyed, when she said she would kill for him, well, I rolled my eyes. I get that she is a bad-ass tough chick, with a bad past and what not, but it was the bad guy in this one that I liked.

When I reached the end of the book, I was finally into it. I wanted more when I read the last page, just to see what the bad guy is up to. He is a bad-ass and I want to know more about him. Does that make me disturbed?

Tonight I am going to zip the tent up before I try to drink my blood. I forgot a pillow too. I don’t know how mad to be… I do have books……. 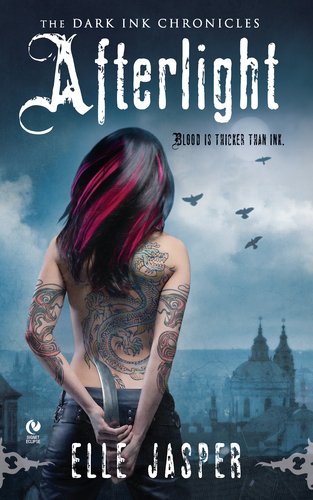 Sherry told me to read this too and I loved it! It was a good quick read. Eli is sweet, but I agree, he’s no Barrons…I’m addicted to Barrons currently. Yeah I know, Lily, hands off for me.

Awesome!! Cant wait to read more in this series – they wont be released quick enough for me!