This one (book#1 in the “New Species” series) came highly recommended by my friend, Tina and I must admit, I loved it too. Interesting premise, awesome intensity between the two main characters, and some all-too familiar “social issues” were explored. And of course, he’s an uber-alpha. BIG TIME. Even more so then the alphas I’ve been enjoying lately, but there’s a reason why this one takes it a step above our “human” bad-boys. Because number “416” (later known as “Fury”) is not entirely human.

I almost couldn’t put it down. I’ll admit it had an awkward start, but I knew once it found it’s rhythm I’d be right there with it. I could tell where this one was going, and the fact that Tina liked it (we have very similar tastes, and she can be picky), encouraged me to continue.

Maryse: Tina. LOVING it. I’m 80% through, fell asleep ’cause my body has a mind of it’s own. It was awkward at first… the story was good, but the repetition of the “events” were slowing it down, but now it’s perfect –

OMG he reminds me of… remember… that vampire? In Christine Feehans Dark series? The one who was emprisoned and tortured for hundreds of years, and this sweet little ‘ol human finds him and releases him and heals him. At first he wants to kill her ’cause he’s had a mind connection to her for a long time and she never came to save him, but soon he realizes he loves her and she is HIS and anyone who ever even comes close to her or worries about her (his brothers) he nearly tries to kill while squeezing her to him…) I LOVED that book, and this one… WOW!!

Tina: … all 4 books are like that. I enjoyed them all. Not a lot of stupid “girl” moments if you know what I mean…

I was too excited because this book gave me that same feeling. Do you guys remember that book? I’m not huge on Christine Feehan’s Dark series past a certain point, but the first few books were alpha-intensive and so good and her book “Dark Desire” was my favorite. This one reminded me of it. He was so primal. Acting on feeling and instinct alone, before having the ability to reason and let go. That feeling, the scary, too protective nature of the alpha, his tortured past… It was so exciting to see him evolve, while still holding onto a large piece of his primal nature.

‘Cause you see, number 416 (Fury), from this series was part of a corporate experiment. One darkly hidden secret that was going to make them HUGE. They were breeding (and genetically altering) human-ish weapons. Splicing human DNA with animal DNA to create super-strength beings. But these “half-humans” were tortured, punished and not allowed any emotional contact, even as children. They were a commodity, poked, prodded, and bred for one purpose only.

And Ellie who worked for that company (but was actually part of an undercover investigation to take them down) was distraught over his inhumane treatment. Working as a nurse, she treated him with compassion and he saw it.

Ellie always came to him sweetly, her touch gentle, and her gaze kind when she’d taken samples from him. She’d been the only human he’d ever met who gave him warm, honest smiles, and he’d even looked forward to the times she entered his domain. He’d trusted her not to hurt him. She was the only person who could walk inside his cell without tensing up in anticipation of dread, pain or humiliation.

He saw fear lurking in her beautiful blue gaze as she stared at him and it wrenched his heart just a  a little. He’d purposely never threatened her or snarled as he did the other technicians who approached him.

She was his one saving grace, and he adored her. Wild and dangerous, and cunning, these beings could tear through their chains and kill the scientists (which they often succeeded in doing), but he never had that urge with Ellie.

Until one day, when Ellie makes a fatal mistake and must cover-up the HUGE mishap by pinning it on him (so as not to blow her “cover”). Today’s the day, and the company is about to be exposed (she has what the investigators need), but if she can’t get out of the lab alive, then the undercover investigation will be discovered, and none of the “New Species” will be saved. Sacrifice one to save them all. You know how it goes… 😉

Fury doesn’t see it that way, and his purpose in life is to end hers. He considers her betrayal the worst of his tortures, because he allowed himself, for that one human female only, to trust and possibly love. And she ripped his heart out.

She crouched over 416. His beautiful but dark angry gaze focused on her. Rage burned in his intense glare. She swallowed the bile that rose at what she had to do next. “I’m sorry. Really. I have to do this to you.”

“I’ll kill you,” he rasped. One hand flopped on the floor next to her. “I swear this!” His throat worked. “I will kill you with my bare hands!”

And you can imagine his surprise when he finds out she is now working at the very compound all of the “New Species” reside at.

Homeland worked according to plan. It would house survivors from Mercile Industries, an oasis from the rest of the world, where they could live, and adjust to freedom with a safe community.

There safe haven, their land, their new home. With a traitor to his kind in the midst. Yep. He goes nuts.

Fury. Yeah, the new name fits the look in his eyes.

So fun! And all of that was only from the first 9% of the book!

So I’m gonna leave you with that, because there is MUCH more to explore. Society’s hate groups, a strong female character, struggling with her sort of… “fight or flight” response. Their possible hatred of her (a human) amongst their kind. The species’ instinctive animal nature conflicting with their human side. It’s all there and I want to know more! 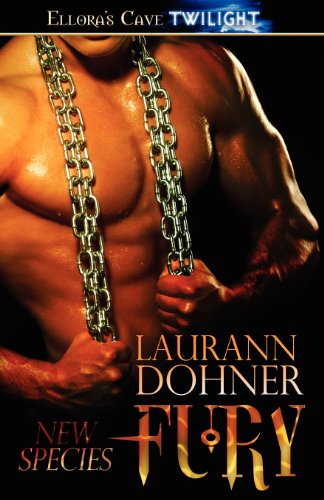 Sometimes I worry that I’m a bad influence.

Squeeeeeee! I loved Fury too. And Yes, the writing is a little clunky at first, but the story grabs you and doesn’t let go. I charged straight on to read Slade, the second in the series and it’s every bit as good. Next up is Valiant 🙂

Maryse, have you read Nalini SIngh’s Psy Changeling series yet? Uber Alpha shapeshifters, both Big Cats and Wolves. I loved them all and can’t wait for the next one to come out.

Okay, don’t hate me, but tbh, I read the book and really, REALLY dislike Fury. Didn’t know it was possible, but it seems he was just TOO alpha-male for me. At the point where he started speaking FOR his woman I just lost all interest in his character.
However, Slade in the next book I’m really starting to like. 😀 He reminds me of Rhage in the BDB series.

ooooh Rhage!! Can’t wait to get to it. Everyone is telling me Slade’s is really good…

Jane.,..
.
I am good with clanky as long as it’s got something to do with those chains.,.heeeeheeee,ditto with the PSy changeling series,…….
Awesome.

I am not familiar with Fury but I am “familiar ” with Elloras Cave..teeeheeee sounds good

Yeah, Slade has some Really Hot scenes . But so angsty as well. These ‘modified’ humans wear their hearts on their sleeves, that’s for sure 🙂

On a side note, although V is my outright fave of the BDB, it’s Rhages story that gets me every time.

Slade’s story was my favorite.

Can’t wait to read it!

Your description reminds me of Lora Leigh’s Breeds series, specifically the book ‘Aiden’s Charity’ which is also good. I should give this one a try.

Danielle, I read that with other commenters and reviewers. Lora Leigh’s Breed series comes highly recommended so I’d like to give it a try too.

I just finished book 3, Valiant and I am hooked on these New Specie men.

Hopefully you’ve continued on in the series. Justice’s story was great and Tiger is HOT! I’m really wanting another book in the series about Brass. Good review! I really liked this series and as an ebook it was very affordable.

I sure have. I’ve read #2 and enjoyed it (although still prefer #1) and next will be Valiant…