Invincible: The Chronicles of Nick
The publishing agency sent me the second installment in Nick Gautier’s YA life, and I found it enjoyable. While I enjoyed it, it didn’t keep me on the edge of my seat (unless of course, the scene included Ash or Kyrian). They were the scene stealers. Ash and his cocky sense of humor, and Kyrian with his smoldering protector, all around “good-guy” sexiness. Sexiness in a YA novel that focuses on a fourteen year old boy? Well, lemme re-phrase. There is no “sexy” in this book whatsoever, but I used my imagination when it came to the adults ;). And it’s easy with Kyrian. He’s so confident and strong and immortal, and once, he didn’t have his shirt on cause it was early in the morning, so, you see? Imagination 😉 Or was the shirtless scene also in my imagination? Tee hee!!

So the story goes like this: Fourteen year old boys in town are turning up murdered, and Nick has a feeling he’s somehow supposed to be the target.

Ash frowned. “What are you talking about?”

LOL!!  With all his power and might, he’s still a goof. A snarky, sexy goof.

Back at school, the coach and principal have been replaced, but all is not what it seems, and Nick knows he has to continue to watch his back. He still has to contend with a particular villain in this story, and while one quickly becomes obvious, there are a few more lurking in the background, biding their time.

He continues to meet more paranormals (the scene when he realized what Kyrian was, had me laughing).

“Fine, just don’t eat my mom, okay? She’s had a bad enough life without becoming the Bride of Dracula.”

He arched a brow at that. “Yeah, right.”

This from the one with the long freaky canines?

His entourage are there to help protect him and train him but are they there for his good, or their own? Some want to sway him to the “dark side” or kill him. But who to trust?

Even “Death” shows up as part of Nick’s new “group” (sent by “someone” to show him the ropes). He goes by the name of Grim (haha), and is required to develop a special sort of patience to deal with Nick snarkiness (even in the face of “Death”, Nick can’t shut up). But his scenes do provide for a few good chuckles, especially one where Nick’s friend Mark, purposely tries to maim himself to get out of work, in Grimm’s presence:

“Dude, don’t do that.” He glanced over to Grim, who rolled his eyes.

“I know this clown,” Grim said in an evil tone. “He keeps teasing me with these near death experiences. One day, I’m going to take his butt down even when I’m not supposed to. You can’t keep knocking on my door and then slamming it in my face. It’s just not right.”

His powers are slowly manifesting themselves, whether through “sight” and absolute knowledge of “others” in his surroundings, or the use of  some very special tools. Nick is extremely special, not just in what he “is” (or will become) but “who” he is. The goodness in his heart and his moral fortitude, prove to be a worthy contender to his foes.

It’s another look into his new paranormal life, where he learns a little bit more about this new world through “Uncle Ambrose’s” eyes. However, will changing Nick’s past “fix” his future, or make it worse for everyone involved, and all of humanity with it?

Ambrose curled his lip. “You, Acheron, Artemis, my father…all of you kept your little secrets from me. Now I am trying to repair your mistakes.”

He did. And there was one thing he saw clearest of all. “Then you don’t know if what I’m doing is wrong.”

Savitar cursed. “You can’t rewrite the past. No one can. Not without terrifying consequences.” 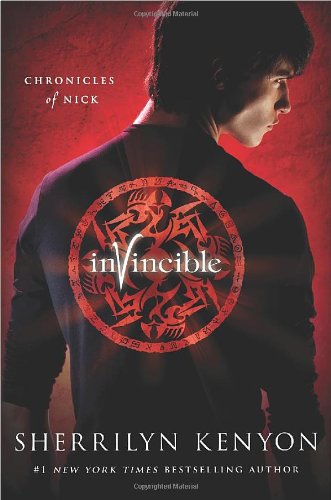 Loved loved loved that Savitar quote. Great review, I am excited to see what the next book brings! *cue Twilight Zone music*

LOL! Yes the ending was quite… interesting.