Retribution (Dark-Hunter World Book 22)
Scratching my head on this one, trying to figure out my stance on it. Okay, I’ve decided. I liked it (about 3 or 3.5 stars worth).
I liked the underlying story, the meaning behind the danger to the heroine, the Native American legend that was the foundation for the entire story. It was non-stop action from start to finish.

Annnnd… that’s where I liked it less.

There was no real downtime for the characters to get to know each other, and for me to bond with them while they did. I’m realizing this issue is becoming a thorn in my side these days when it comes to the paranormal genre. When I think back to books like the Black Dagger Brotherhood, or even old style Dark-Hunter books, there was always significant downtime.

Remember Talon and Sunshine? Their book started with an entire 24 hours alone, in her apartment (and then there was more of that later as the book progressed). Remember Zsadist’s book? While Bella was convalescing and dealing with her traumatic event, Z was there for her, quietly tending (tee hee… okay so maybe a bit more than “tending”) to her needs. Remember V’s book? That whole time where HE was convalescing, and Jane was tending to him in his room?

Moments (long moments) like those used to happen often throughout the book. The characters “live” together, and get to know each other. There’s always danger, lurking in the background, or moments of battle and rescue, but there are equal times of repose where the all the characters eat together, laugh together, argue, and get to know one another on a deeper level. Even with the “extras” in the book, everyone is living.

I miss stuff like that, in this genre. Now I’m finding it’s just non-stop running, non-stop fighting, non-stop rescuing, and somehow, on the “drives” to wherever the main characters are going, or maybe one night, they manage to get to know each other and fall in love. So I see it happening. I’m just not there with them while it is.

As I just mentioned to another Kenyon enthusiast:

“Sigh.. I don’t know what happened to the “love” (and not just the steamy stuff, but the intense stuff). It’s missing, that’s for sure. I haven’t crushed on a Sherrilyn Kenyon character since Raven…”

And that’s pretty much my only complaint with this book.

Which brings me to the premise:

Abigail (a human) was raised by Apollites (you know the pre-vampires cursed to live only until their 27th year and  then die, or feed off of the souls of humans to keep living, becoming “Daimons”). Her parents were murdered in front of her, as she hid, and she knows exactly who murdered them. She saw him do it with her own eyes. William Jessup Brady (aka “Sundown”) who was supposedly a friend of her mothers, came into their home and killed them both in cold blood.

And as she heard those heavy footsteps leave her home, she’d sworn one thing.

To find the man and kill him as brutally as he’d killed her parents. To make him beg for mercy she had no intention of giving him.

Retribution would be hers…

Discovered and then raised by an Apollite family, they poisoned her mind against the Dark-Hunters, convincing her of their bloody-thirsty ways, and teaching her to kill any that she came across. Having quite a few successful “Dark-Hunter” kills under her belt, she was elated when Sundown crossed her path. The man she hated most in life. She’d finally get her revenge.

“Oh spare me you, you blood-sucking bastard. I know exactly how you prey on people and then blame it on Apollites, for it.”

He scowled at her. “Wait, wait, wait. I’m confused. First I’m a murderer, and now I’m guilty of preying on all humanity. Woman, who have you been talking to? They done got your head screwed on backwards and then some. We’re not bad guys in all this. The Daimons are the ones killing humans, not us.”

Sundown, however recognized her immediately. The little girl he once knew (daughter of his recently murdered friend). Strangely enough, looking at her now, she was a perfect mix of the woman he once loved over a hundred years ago (when he was still human), and his evil best friend. The very one that caused him such anguish, inciting his chance to become a Dark-Hunter. Coincidence?

Quickly realizing that SHE is, in fact, the “Dark-Hunter murderer” that they’ve been looking for, he outmaneuvers her attempts to slay him, and kidnaps her.

The woman in his arms was like everyone else he’d met. Treacherous. Lethal. Only out for herself. Whatever he did, he couldn’t let himself forget that. She wanted him dead, and if he didn’t stop her, she’d kill him and then move on to the rest of his colleagues.

He’d protected her and her mother, and how did she pay him back? By trying to kill him.

Tee hee. Yes, I continue to enjoy when the “immortals” kidnap the hapless human, for her own good (and his) 😉 Although this one’s not so hapless. She received a little dose of demon blood to assist her in her goal.

Unfortunately, in her quest to kill as many Dark-Hunters as she could find, she killed an Immortal (Old Bear) that was one of the “guards” of evil and plagues. And now some of those plagues have been set free. Zarek (YAY Zarek!!) breaks the news to them:

“Honey, let  me give you a quick lesson. Just cause someone’s a few centuries old and fanged, doesn’t make them a Dark-Hunter.”

Zarek concurred. “And some of those fanged immortals we actually need. Old Bear happened to be one of them.”

She rolled her eyes dismissively. “Pah-lease.”

Jess ignored her. There was no need in arguing with her right now. They had much bigger problems on thn her pigheadedness. “How bad is it?” he asked Zarek.

“Well, he was the Guardian for the West Lands, where his people had banished some of the worst of the supernatural predators. Now that he’s dead, the balance has shifted and those guarded can be set free.”

And the only way to fix it was to offer in sacrifice the blood of the one who let it loose. In Zarek’s words:

He passed a wry grin to the woman. “That’d be you, sweet cheeks.”

Abby, your time has come. In your misguided arrogance, you have just set a world of trouble, in motion (but hey, I’m good with it. Cause of you, Zarek made an appearance *blush*).

If he was right, if those images were the truth, then she was wrong on a level so profound that it made her sick. It would mean she’d done horrendous things to people who didn’t deserve it.

People who’d been protecting the innocent from predators.

So see… Abby’s not all bad. She just didn’t know any better 😉 As the plagues begin appearing, Sundown finds himself protecting the woman that hates him, protecting themselves from the evils that are suddenly haunting them, all the while, trying to get to the bottom of who she really is, and who actually killed her parents. But there’s a MUCH bigger story to uncover. The action, adventure, all of it, is just a small part (even though it’s relentless). The actual “reveal” towards the end was quite something. There’s a whole lot more to Abby then just being a demon infused, human, after all.

So be ready. There are thousands of killer scorpions that climb in through any crack they can find to sting them, hordes of wasps that stalk them, coyotes that want to eat them, and a few awesome cars and motorcycles that umm… don’t quite make the escapes in their former glory 😉 (and on that note, can I just say I adore Andy, Sundown’s Squire in a old-Nick adoration, sort of way?)

LOL! Oh did I mention, this book DID make me chuckle a ton. Here’s a part that had me howling after a super-tense moment when Sasha, the werewolf said:

“All right, everyone. Fess up. Who just shat in their pants? C’mon. Admit it.” He raised his hand. “I know I did and I’m wolf enough to own it.”

Lots of very funny moments, and it was because of the signature Dark-Hunter (Sherrilyn Kenyon) humor, that I was able to connect at least a little bit, with the characters.

Where’s Ash? He’s in there. He’s a little preoccupied in this one, though. It’s all good. 😉 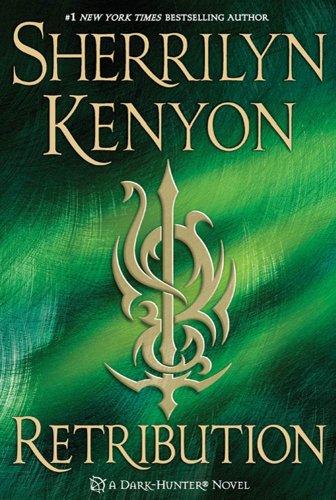 I know I’m going to read it, if for nothing else than to see where this ship is going. Plus I really like Sasha. He amused me to no end in Zarek’s book. And I may or may not have a thing for dark hunter cowboys.

I was disappointed in this one 🙁 Which really irks me b/c I was looking forward to it so much! Maybe I made the mistake of not reading the spin off series (dream-hunter) before reading this one It seems like I was missing a lot of background info. But beyond that it just didn’t seem like Sherrilyn Kenyon’s writing style. I kept wondering if she didn’t have someone else ghost write this one for her. I will continue to read the dark hunter series, and finally get onto reading the dream-hunter books. I’m keeping my fingers crossed that The Guardian can recapture the love I felt for the other books 🙂

I do miss her old “Dark-Hunter” style. So much more intense, I used to have a hard time picking my favorite hero out of her series (I still do with the older books in the series). Not so much anymore…

how can anyone give this a positive review? it was so full of cliches and predictable action–yes she hates him but can’t control her lust for his rock hard (particularly in THAT place) body. Simply stupid–not even worth the sales tax you’ll pay!