“Hey, guess what! I wrote this book so many of you have been waiting for, the book I said I would never write, and here it is and it releases in eight days! The book is Veiled.

It’s a standalone paranormal romance and a spinoff of EIT. … Yes, it’s about Ada Palomino (all grown up at eighteen, going to college, so it’s technically New Adult)”

It’s true! A standalone spin-off from Karina Halle’s “Experiment in Terror” series will be released in just a few days. Best of all? You don’t even have to read the EIT series to be able to enjoy this one. And I must insist. PLEASE. Please jump into this world with me (even if it’s just through this book). I can’t wait to read this, and I just know (knowing Karina’s awesome stories) that we will LOVE it.

‘Cause y’all know I’m a HUGE Karina Halle fan (have read almost everything she’s written) and I’m an absolute “Experiment in Terror” addict. Dex is one of the true book-loves of my life, and I can’t help but go on an on about all of the reasons this series will hook you. It’s got the paranormal chills and thrills, the most intense, incredible slow burn (that will have you begging to PLEASE PLEASE let it happen… and it’s done SO right). And best of all? It’s got very human (and therefore, mistake-making) characters that we can absolutely relate to. From hilariousness, to rip-your-heart out “OH. NO. HE. DIDN’T!!!” moments. I’m serious. Insanely awesome series (and each book is better and better).

So what’s this book about? Here is the blurb:

It’s something that Ada Palomino has always known so well, having grown up in a house of horrors, surrounded by a family plagued by ghosts and demons and things that go bump in the night.

But after the sudden and tragic death of her mother two years ago, death has never felt so personal.

Now eighteen, Ada is trying to move on with her life and the last month of summer holds nothing but sunshine and promises with her first year at a Portland design school just around the bend.

That is until her increasingly violent and realistic dreams, dreams of other worlds, of portals and veils where her mother is tortured and souls bleed for mercy, start to blend into reality. Ada has to lean on her older sister, Perry, to try and make sense of it all but even then, she’s never felt more alone.

Then there’s Jay. Tall, handsome and deeply mysterious, Jay would be just another stranger, a familiar face on the bus, if it wasn’t for the fact that Ada has met him before.

In every single dream.

And the more that Ada is drawn to him in both worlds, the more she’s in danger of losing everything.

And her very soul.

BUT!!!! You’re probably wondering a few things, and Karina is here to pre-answer your questions:

Q: Is this YA?
A: No. The main character is 18 and there is sex, crude language and violence in the book. It is recommended for mature teens or 18 and up.

Q: Is there a cliffhanger?
A: Nope! There’s also no cheating and no love triangle (think I’ve covered the bases there!)

Q: Do I need to read the series (Experiment in Terror) that Veiled is a spinoff of first?
A: Absolutely not. Veiled stands alone. You do not need to have read the EIT series beforehand as this follows a different character (Ada Palomino) and a different storyline. However for those who have read EIT, all your favorites are in the book!

Q: Is it horror? Your other series was and I don’t handle scary very well…
A: No, it’s paranormal romance (though I promise you there are no vampires or werewolves), and while there are creepy elements to the story, it wouldn’t be classified as horror. You’ll be fine. 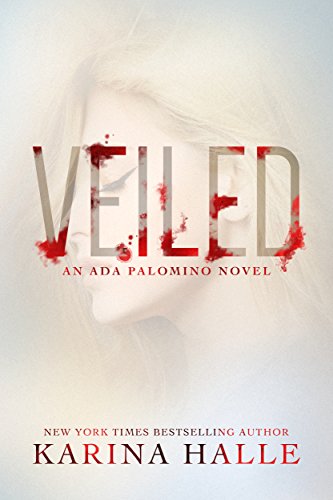 So gorgeous! And I’m excited for this book!!

LOVE EIT. Can’t wait to get my hands on Veiled!!

More Perry and Dex plus Ada! I love the cover!

SOOOOOOO excited for this book to be coming out!!!!!

Ada, Perry, Dex!!! I have not been this excited to read a book in soooooo long!

Beautiful cover!!! I can’t wait for this!

I have been waiting for this book for what seems like forever! I’ll be dropping everything to read it next week!

Maryse, right there with you!!!!

Question- when it says the platform is Kindle Unlimited….can folks with just a regular Kindle still get this book?

Yes you can buy the ebook on Amazon like normal… it’s just free to read for those that have a Kindle Unlimited membership.

Love it!!!! I am one of those who has been impatiently waiting for this forever.

Everyone should read this! It’s gonna be amazing

Excited to catch up on Ada, Perry and now Jay (gorgeous). Another beautiful cover from Hang Le.

YESSSSSSS!!! I remember when you first recommended the EIT series. It is like an endearing and terrifying old book friend, lol. Such an engaging mix of “real” characters, scary, and slow burn! Glad we don’t have to wait long for this one. 🙂

Can NOT wait to read Ada’s story….I love the EIT and Perry and Dex….who doesn’t love Dex…,I enjoy the scary craziness that is Karina Halle!

Karina’s the best! Can’t wait to read this story and you all need to read all of the rest of Karina’s work!

Cannot wait! I love all of Karina’s books and no doubt this will be the same. And Dex too? Mmmmmm. And that cover? Wow! It’s going to be an awesome read!

So excited about this!!

Yas!!! I can’t wait for this I loved the EIT series. Gorgeous cover Hang Le ❤️
Can’t wait to catch up with Ada, Perry, and Dex…and meet Jay

I’ve been waiting & praying for this book!! I’m such a BIG fan of all of Karina’s Books ♡ Love Dex and Perry ! SUPER excited this comes out when I’m going on vacation to FL and relax and read by the pool!! 🙂

I am SOOOOOOO Thrilled!! Trying to get my book besties to do a Group Read!!! Did I say how THRILLED I was ???!!!

I’m soooooo excited to read this book! I loved Ada in the EIT series and how her relationship with Perry changed and developed as Ada sort of came into her own. I feel like we just scratched the surface of Ada’s strength and I’m so looking forward to her story!

Woohoo! I freaking loved EIT and can not wait to read this, Karina is one of the few authors I follow on FB and email and when I saw the blurb for this book I could not for anything remember who Ada was. Aha! The sister! I loved that character and the relationship between her and Perry. Yayyyyy…

I hope that the author is seeing all these posts from fans of EIT. She has stated that she has heard from hundreds of fans that do not like the wait in between books in a series, and they prefer the stand-alone format of novels. To each their own, obviously! I on the other hand continue to LOVE the EIT series, having reach each book more than once. Waiting for the next book in the series to come out was a bit nail biting…but the anticipation of the next installment in the series was part of the THRILL for me. I will continue to read every book she writes, no matter the genre….but for me, EIT still rules :-).

Ok, I am confused…can I just buy this on amazon for my Kindle? I don’t currently do the kindle unlimited and wasn’t really intending to.

Hi Nicole- I had the same question! Yes, the book will be available for purchase on Kindle…it would just be “free” as part of the subscription to Kindle Unlimited, if you had that plan.

So…went out on Amazon today and tried to purchase- but I’m not finding it available. Anyone else having any luck?

Do you know who else appears in this book? Dawn and Sage from The a Devils Metal

Finally!! I have had this on my radar for a long time now and have been in withdrawl ever since EIT was completed! Already one-clicked!! Woo Hoo!!

If paranormal is not usually your thing, then I urge you to take a chance on this book because sometimes you just need to take a leap into the unknown and escape from reality for a while, and you might just fall in love with Ada and Jay as much as I did.