X
You are here: Home / Behind The Books / Vanessa Marie’s “The Suicide King” is LIVE & she’s sent over Five Facts about the book

Whoaaaa!! That gorgeous, moody cover, and title (The Suicide King) has me so intrigued!! Vanessa Marie is this week’s newsletter sponsor and to celebrate her latest release, she sent over a “Five Facts” to give us a look behind the book.

It sounds poignant and heart wrenching. Just check out this blurb, and tell me it doesn’t give you goosebumps…

Jason King thought suicide was the only answer.
He couldn’t take it anymore.
The inner demons were winning and he was ready to surrender.
As far as he was concerned no one would care.
Everyone would be better off.
No one would notice he was gone.
Little did he know how wrong he was.
His actions had consequences.
The reach went further than he could have imagined.
Only his suffering didn’t end.
Stuck in purgatory Jason is forced to walk a new path.
One that shows him how his suicide affected all those involved.
Even the ones he never thought would care.
The ones he never knew it would reach.
In this Scrooged-like tale, Jason King will visit all of those who mourn him.
He finds out a little too late how wrong he was about everything.

And the author told me:

This is a very heavy book. It is so far from romance. It is angsty and dark and very emotional. This is a book about suicide. I feel like it is something that happens all around us, in the media, in our schools… to our friends and no one ever really talks about it. Not really. No one talks about what happens in the aftermath. To the people who are left behind. I wanted to look at that. To take someone who had committed suicide and force them to go back and see all the destruction they left in their wake. While all the pain may have been over for them, it had only just begun for all the people they’d touched in their lives.

So while this may be something you would never usually read. I ask you to give it a chance. I’m hoping this story can reach just one person out there and make a difference in their life.”

1: My inspiration for this book comes from a multitude of places. When I was twelve, I went through a trauma that changed me in such a profound way. I didn’t know how to handle my grief or anger. I was very suicidal. Thankfully my English teacher and school counselor had their eyes open and intervened before I did anything rash. My mom made sure I saw a therapist, and it made all the difference in the world for me. Fast forward twenty years, and my husband experienced terrible trauma. This time I’m on the other side of the fence. I’m trying to be supportive, and yet I’m watching him struggle with his mental health.

As a writer, I wanted to show him the only way I knew how we wouldn’t be better off without him. That it doesn’t get better when you’re gone. This book was my plea for him to understand we need him. Then the phone calls started. We would hear about friends or kids of our friends or acquaintances we knew who had killed themselves. Each time it gutted me more and more because, at one point in my life, I’d been that low. Now, I see it as could I have really done that to my family? Could I have shifted my pain to them that easily? This story is fiction, but I think the reason so many people have a love/hate relationship with it is that the emotion is based on raw truth. And I wanted it to be able to change someone else’s mind too. It’s taken me a year and a half to finish this book because it was so hard to write; however, I hope it saves a life.

2. There were parts of The Suicide King that were so difficult to write due to the mindset I had to be in. There were certain characters I didn’t particularly like writing, even though they needed to be written the way they were. They had a voice, and I had to follow it whether or not I agreed with it. I had to walk away from it a lot. It was heavy and would put me into such a mood after I was done with a writing session. I would binge-watch something on Netflix when I was done to get my mind back on track. It’s part of the reason it took me so long to write. I got stuck with the story about halfway through. I didn’t have enough ripples for Jason to face, but I always knew where the story was going to end. There were vague ideas for them, but I didn’t want to meet them. After sending it to my content editor and talking with her, she was able to pull so much out of me, I realized I was holding myself back. When it comes to the people who are left behind, they never get over it. It’s a weight they will walk around with forever, and it manifests in different ways. I wanted to show that as best as I could.

3. First and foremost, I am a reader. I love romance. It is my favorite genre. It is the one I always come back to, and I will defend it until the end of time. (I mean I am probably one of Penny Reid’s biggest fan girls. Hah. One day I will meet her and I’m sure she will run screaming.) All of my previous books are romance or coming of age. This is entirely different from what I typically write. My last book, Fabricating Jada, was snarky and fun. It’s about a female mechanic going head to head with an alpha male and holding her own. Going from something like that to something like this was a hard but necessary transition. Unlike most authors, I never stay in my lane. (As in I don’t finish things like I’m supposed to. Hello, six years later and I haven’t finished my first series. which I know is not suitable for my brand) But I follow my heart when it comes to what to write next. It may not be the smartest thing for me to do. But it’s the truth. Romance always has this build up to something grand. We have expectations of the couple getting together and a happily ever after. The meet cutes and the banter are so fun to read, let alone write. And then when I look at The Suicide King, it has none of those things. This book was dark and heavy. It isn’t a fun read, but it is an excellent book that will hold your attention. It took different parts of my brain, and my personality to make this happen, but I hope going out on a limb will be worth it.

4. My writing process is all over the place. I am a half plotter half pantster. I always have a general idea of where I want the story to start and end. I NEVER write in order; I hop all over the place. I usually start in the middle of the story and work my way forward and then to the end by bouncing between a chapter here and there. This story was a challenge for me because it was a lot shorter than what I’m used to writing. I’m used to having to cut down my chapters because they’re too long. This time, they were so short, but I felt like they packed the necessary punch, so it was okay.

5. All of my books have some part of myself sprinkled into them. They say life imitates art. I write what I know and then make it fun. In my first series (Which I still need to finish) The main character struggles with heart disease. I wrote that book the same time I was diagnosed and was forced to retire from being a mechanic because of my health. It was my way of dealing with everything I was going through. In the next one, she had a high-risk, complicated pregnancy. Guess what? So did I! It’s funny because one of my reviews said I just added all this stuff to the book for drama sake and I had to laugh. Because all the things she was calling out for drama had happened in my real life. The reason I haven’t finished that series is that I know where that story is supposed to go, and our stories are so intertwined when it comes to the health stuff it’s like writing my own. I’m not ready to face it. But I will. Fostered is a gem that is sitting there waiting to be discovered. It’s a YA, about a dysfunctional, unconventional family. Guess what kind of family I come from? And then there’s Fabricating Jada. Jada is a mechanic… I was a mechanic…I used the stuff I knew and made it fun. The same thing goes for The Suicide King. I used the things I know as the wife of a retired police officer and someone who has dealt with mental health in many ways to make this as realistic as possible. Will all of my books have this going forward? Who knows. I just know I pour as much of myself into these stories as possible because I want people to love them as much as I do.

Connect with the Vanessa Marie: 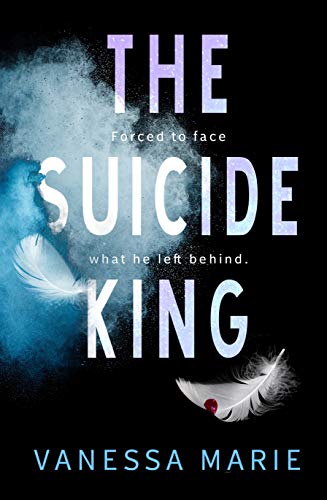 Very poignant, “…could I have really done that to my family? Could I have shifted my pain to them that easily? ” This will be a very difficult read for me, but I one clicked anyway.

This one will tear my heart out. So many in various versions of self-destruction and in turn… their loved ones are suffering with them.