Okay so like, you know how we always kind of chuckle when we discuss zombie romance novels, making sure to mention… “you know, as long as we don’t fall in love with a zombie in the book, or anything… ICK!”

Tee hee!!! Allllriiiight, well maybe I’m the one guilty of saying that every time I tell someone I’m reading a zombie romance/erotica. And sure enough, I’ve read a few, the latest being “Flesh” by Kylie Scott that I LOVED because the story takes place during a zombie apocalypse, but it’s actually humans (*phew*) who fall in love with each other! Fight for survival, fight for protection… fight for keeping one’s humanity, and what better way than forging bonds with someone else when you thought you were all alone in a changed world.

Well. I have a confession, to make. I’ve wondered… what if somehow, the zombies weren’t as “gross” as they dead ones that have flesh rotting off in some zombie renditions. What if somehow, some way, this seemingly evil creature could actually be reached? I mean I was always a little uneasy with the idea of “zombie love” in paranormal romance novels. But after reading something of the sort in Jeaniene Frost’s “Night Huntress Series” (the heroine’s “re-animated” dead friend that becomes a zombie-like/ghoul that actually retained some of his humanity, and yes… fell in love), I also wondered what else could be done to further the possibility.

And I was avidly discussing this with my husband when I saw a recent movie trailer during the latest “Walking Dead” marathon. I couldn’t believe my luck!!! Here was a movie about a zombie apocalypse, with a human-thinking/feeling zombie that appeared to be “stuck” in his horrible zombie-body and controlled by his murderous hungry urges. Whoa! It looks a bit like a comedy of sorts, but you know… with a deeper edge to it.

I mean… what IF, after all of this time, we find out that zombies were still able to think and feel as a human, but were completely controlled by their monster-side? Awwww poor things. That would be hard. Errr… you know. *smirks* IF zombies were real, that is. 😉 hehe.

So I looked this movie up (’cause really, I can’t wait until February 2013 to watch this), hoping it was inspired by a book, and lo and behold… it was!!! It is a book —-> Warm Bodies!! *squeeeee* I gotta check this one out. I bet it’ll be better than the movie (’cause we’re book snobs and the book is always better 😉 )! We can really get into the zombie-guy’s head, and emotions. Yep…. this one is now on my TBR list and it’s way up there in the “want to read very soon” section. I can’t wait!!

After all… maybe zombies need love too. 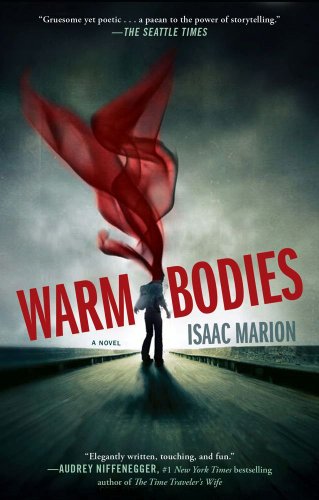 I saw the preview to this movie last week when I saw Skyfall. I didn’t realize it was a book. I’ll add it to my TBR list.

Yeah, my husband and I saw this advertised on TV just last night and thought the same thing…ICK! But to each his own; apparently he’s a nice, sexy zombie. 🙂 And you are sooo right Maryse, the book is always better that the movie. 🙂

AWESOME! I saw the trailer in the theater but did not realize there is actually a book. I am so reading that book! And the other one you mentioned…

Thanks Maryse, I saw the trailer and thought it looked almost funny – I didn’t know it was a book! Just downloaded the audiobook from my library – I know what I will be listening to at work tonight!

I saw the trailer and did the same thing Maryse… went looking for the book!!! LOL I put the book on my Amazon wishlist as I was not sure it would be worth it, since it was kind of pricy for me.. So I will wait anxiously for your review!!! 🙂

LOL! Okay I’ve downloaded the sample and hope to get to it over the weekend. I have a feeling it’ll be up my alley, though.

I read this one awhile ago… Kinda moved slow and still did freak me out that the love interest was a decaying zombie… haha! But interested to hear your take on it – the movie trailer definitely looks better than I remember the book being : /

Rebekah, Does he smell bad in the book?

Let me clarify: did the author write about any unpleasant zombie odors coming from the Hero? Need to know… I hate stinky!! 🙂

LOL!!!!!!! I know… the “smell” ick!! I remember how in the Anita Blake books she would always talk about how the vampires (the very ones she was in love with) had a faint smell of death to them. I don’t remember exactly how she said it, but I always *squinched* my nose with that.

Maryse, I’m trying to find Flesh and can’t find it. Says its Unavailable….. Live live romance, with people, during apocolytic* zombie* times. contagious and Deathly Contagious are fabulous btw. Any more recommendations in this genre let us know plz!

Oh wow Rebekah.. I am getting mixed reviews on this one, many loved it but some say more along the lines of what you just did.

Well the movie trailer sold me on it…. and wouldn’t that be something that the movie ends up better than the book?

Elizabeth – I’m fixing it now. For some reason now there are “two” versions for Kindle, and I’m linked to the original…

Just finished this book..it’s an interesting take on romance lol. There is a sequel in the works but i don’t know when its due to be released.

Ohhh No! I did not think about the “smell”, the hero just looked so cute in the trailer… LOL

Maryse – I had to read this book after seeing the trailer. I loved it! I hope you enjoy it as much as a I did. It’s so funny!

I read this about a year ago and enjoyed it. It’s more of a sweet romance, obviously. If it’s gone the sexy route I don’t think I’d have been able to get into it as much.

I cannot believe u haven’t read Warm Bodies yet Maryse!!!!
I read it when it very first came out because it was highly recommended by Stephanie Meyer.
I’ve read better, I’ve read worse but over all it will make a great movie!!!!

Lynn Messina has a book out about dating zombies. It’s really quite good and informative!

And I haven’t heard of this book before, but thanks for sharing. I’ll take a look!

I’ve had discussions with male friends about vampires vs. zombies – they don’t understand how anything “dead” could be sexy. I’ve always told them the biggest difference between vampires and zombies is “decomposition.” I didn’t think I’d enjoy a zombie romance – then I discovered Dearly Departed by Lia Habel. I think the only reason I gave it a try was because it’s a steampunk novel, but I’m glad I did because once I got past the “eww” factor, the love story itself was compelling.

I’ll be interested in reading your review of Warm Bodies.

I just finished this a few days ago cause I saw the trailer during the walking dead too lol. I thought it was an intriguing story and after I got my paycheck I bought the book for my Kindle. As for the story, it was enjoyable, the end was a little rushed and holey but all in all I liked it. 🙂

I read this ages ago and think it will make a great film! Was recommended by Stephanie Meyer so thought why not? I enjoyed it x