<— THE DUET CONCLUSION JUST WENT LIVE TODAY!!! Oh how I LOVE evening book surprises and I have a brand new duet that’s right up our alley (and as of today… it’s now complete!!).

Book #2, Cadence Defined (Cadence Duet Book 2), just released today, and to celebrate, the author is sponsoring today’s newsletter, and having a giveaway right here on the blog. Plus a little introspection into the duet (7 facts!!), to tease us and give us an inside look. 😀 P.S. The duet is in audiobook format, too!

Seven Fun facts about these books:

1. The Cadence story was only supposed to be one book, but I can’t write a short book to save my life and decided to split it into two!

2. In Cadence Untouched, there is a brief reference to ham and apple butter sandwiches. A reader thought that sounded really good, so she looked up a recipe. Since then, a few people in my reader group have been swapping recipes for it! Personally, I’ve never tried it – but according to Google, it’s a Virginia favorite!

3. Many have said, “Be careful what you say to an author. It could end up in a book.” Well…throughout both books, the braided hairstyle Cadence wears is frequently mentioned. My best friend is a blond who always wears braids. Her fiancé once said something to me about her that I found incredibly romantic. It stuck with me, so I incorporated it into something Fitz does at the end of Cadence Defined. Unfortunately, I can’t say what it is exactly without giving a spoiler – sorry!

4. When I was in grade school, I was obsessed with Chinese origami fortune tellers and mixed tapes. It was really fun to incorporate them into Cadence Untouched!

5. I love to travel and I’m really big on researching my settings. Cadence Untouched takes place in Virginia at a fictitious music camp called Camp Riley. While I didn’t go to Virginia, I did take a day trip to Chautauqua Institution so I could get a feel for how I wanted to detail Camp Riley. I also went to Washington D.C. just so I could “make the same run” Cadence and Fitz did in Cadence Defined. 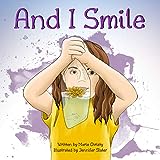 6. Cadence wrote and illustrated a children’s book called And I Smile. My daughter inspired me to make the children’s book a real thing! A portion of the proceeds from the Cadence books and And I Smile will go to charity. See https://www.dakotawillink.com/dakota-gives-back.html for more info.

7. Music is a huge inspiration for me and I incorporate it into all of my books. I had the idea for Cadence in my head, but I wasn’t sure how I wanted to tackle it. Then, in September of 2017, I went to a U2 concert. During one particular song, they gave tribute to women. They had such a powerful message and something in brain just clicked. I began writing the very next day. In case you’re interested, I have playlists for every single song referenced in my books on Spotify. If you don’t have Spotify, you can check them out here: https://www.dakotawillink.com/playlists.html

Cadence Riley didn’t have time for guys—no matter how potent their smiles were. She knew better than to fall for someone like Fitz Quinn, the spoiled bad boy son of a wealthy politician. But the second he spoke to her, she knew she was in over her head. He was a gorgeous trouble maker with a cocky attitude. Her heart warned her, but she didn’t listen. There was something protective and good beneath the bad boy exterior that made her insides flutter.

Before she knew it, she fell hard and fast.

Fitz wasn’t prepared to meet a girl like Cadence. She was shy and innocent—and nothing like the girls who usually flocked his doorstep. How could he resist her mile-long blond hair and emerald eyes? He knew he shouldn’t want her. His father already had other plans for him and a relationship with her could never go beyond the summer. He thought their stolen kisses by the lake were only supposed to be a summer fling. Falling for her shouldn’t have happened. But it did.

Now the clock is counting down until Fitz has to return to the life that awaits him in Washington D.C. As September draws closer, how will they survive the end of everything they’ve come to love?

Now for the giveaway!!

How to enter for a chance to win it? Just leave a comment below (or better yet, tell us about your favorite “crazy-combo” sandwich – mine is a triple-decker peanut butter, honey and banana sammich!) and by 10pm EST, Sunday March 3rd 2019, I will randomly select one lucky commenter as the winner.

Also, while not necessary to enter, it would be awesome if you’d share this giveaway on Twitter or Instagram, or Facebook.
The winner will be contacted and will have 48hrs to respond confirming their mailing address, so if you are picked, do not delay or you will lose your chance. The prize will be sent to the winner directly by the author.
Giveaway open to US!!!

Congrats to Dakota on her new release! My favorite crazy sandwich is peanut butter, banana, and nutella.

Oooooh Booklady I LOVE your style!! LOL!! That’s even better than mine. 😛

Yah Dakota! My crazy sandwich is Turkey, cheese, mayo, onions, tomatoes, pickles, olive oil, oregano, and potato chips! Not as great as the Lake Special but I don’t have Manning to inspire sandwich greatness.

Maryse, my fave is the same as you! Smooth and natural peanut butter butter, banana and honey but on chala or egg bread. Eat it all the time on the beach camping. It’s extra good when it’s been sitting in the sun for a bit.

Thanks so much for the chance to win a signed copy of your book! My favorite that everyone seems to turn their nose up to but is delicious is peanut butter, banana, and mayo!

My favorite is to wrap cheese in roast beef – no bread.

My crazy sandwich is a hamburger with potato chips on top

Thank you for the chance. My favorite sandwich is Lebanon Bologna with sour cream and onion potato chips. Although a tomato sandwich is good too.