X
You are here: Home / Behind The Books / An exclusive “Behind the Book” look with Claire Wallis: “Five Things I Learned While Writing PUSH”

<— Remember that darkish book that I loved SO much a couple of months ago? Push (check out my 4.5 star, spoiler-free book review of Push and you’ll see). It was the one that kept all of us that read it on the edge of our seat FREAKING OUT over what we were reading. To give you an idea… here’s a bit from the blurb.

David is cool and collected, and he makes Emma feel safe for the first time ever. But David has his own chilling past—his six previous girlfriends have all disappeared without a trace. Emma’s walking a dangerous line, but David’s pull is intoxicating. And impossible to resist…

This author is deviously clever!

BUT!! If you haven’t read Push yet, <—first, here’s my review and I just read the author’s “Five Things I Learned” (below) and EVERYONE can read it! No spoilers. She was VERY good at keeping it “clean” and still you’ll go in nice and blind. I want you to read the book in all of it’s crazy, exciting, scary, swoon-worthy glory. So, for those that haven’t read Push yet, scroll past my mini-panic-attack below, until you see this —> Five Things I Learned While Writing PUSH, and then start reading again. But either way. If you occasionally like your romance reads dark and scary and mysterious… read this book!

But for those of us that have read it, you can continue reading my mind-ramblings, below:

‘Cause, she had us all so nervous right?? Just knowing… something… *eeeeeeeep!!!* and yet… connecting so HARD to both of the characters. Even the er… implied “bad guy”. It’s not just implied. I think. I mean, no. He’s bad. Yep. Unless there’s more to the story and I’m missing something? Maybe. But… there’s no way for redemption. Right? There’s just… no. I think. No. Nooooo. I know. Yes. Er… GAH!!!

I don’t understand (I mean it’s kind of obvious ’cause of the “look-backs” as the story progressed) but OMG how can I be so connected to him?! I mean considering what we now know… But no! Nope. There’s just no way to redeem that, right?

I’m dying to know more, and I’m hoping the author’s “tidbits” below have a sneaky “read between the lines” message that will give me relief, but with an awesome crazy story like that, and THAT kind of cliffhanger? Yeah… I don’t think the author is going to give it up that easy. 😉

But let’s see what we can glean from her creative, deviously scheming mind, shall we?

Hi. My name is Claire Wallis, and I’m the author of PUSH – a crazy, little love story about two very lost souls named David and Emma. I learned some interesting things while writing the book, and Maryse and I thought it might be fun for me to share some of them with you.

1. Fiction writing is not a good career for people who crave constant feedback.

Fiction writing is a solo activity. Yes, you can have critique partners or be part of a writing group, but the actual act of writing is really kind of lonely. That might not bother some people, but it bothered the hell outta me. Social activity is my crack. I crave interaction with other human beings. I WANT to be around people. Lots and lots of people. Writing is lonely stuff, and I suspect that’s why social media is incredibly important to so many writers. It lets us connect with real, live human beings on a regular basis. And they respond! They give us the feedback we so desire. Social media is the only way I “get out” some days. It’s key to my sanity.

2. It’s entirely possible to fall in love with a person that doesn’t actually exist.

David. MY David….sigh…..I love him. I know I shouldn’t. But I do. I can’t help it. Even less-than-perfect people are worth loving. Even people with faults as enormous as David’s can be deserving of our empathy, our sympathy, our understanding. I hope that his story adds emotional complexity to PUSH and creates conflict within the reader. As you learn more about David – or any other fictitious “bad boy” for that matter – you might begin to understand what shaped him, what drives him. And maybe knowing all that might allow you to fall for him the same way Emma did. The same way I did. Or maybe it will drive you in the opposite direction. I don’t know. But, I wanted the small pieces of David’s story scattered throughout the book to give you just enough insight into his life to make you consider that maybe he’s somehow worth understanding, if not loving. Even just a little bit.

But I love him much more than just a little bit, because I know ALL of his story. And someday you will too…. (wink, wink!)

You know what I mean by the “Dirty Cs”, don’t you? Those C-words that jump off the page almost every time you read a sex scene that uses graphic language? How many “Dirty Cs” can you name? Think about it…..I’ll wait….still waiting….got them all yet? I’m uncomfortable even typing them here, so I’m not going to. I’ll just assume you know the words I’m talking about. I’m far from a prude (if you already read PUSH, I bet you figured as much), but those words just don’t do it for me. In fact, they downright bother me. Graphic language is a big turn-off for me as a reader, so I tried my damndest to create smokin’ sex scenes without it. It was so much more difficult than I thought it would be.

If you ask my husband or any of my friends, they’ll say that this is not breaking news. But until I wrote PUSH, I believed that everyone thought the same way I do. I thought that little fragments of stories were rolling around in everyone’s head, every waking second of every day, just like they roll around in mine. Turns out I was wrong about that. Some people can actually shut that sh#t down! They can switch off their brain and stop the ideas from bouncing around in there. Not me. Sometimes I’ll hear someone on the street telling a story, and I’ll pull one sentence out of it and I’ll dwell on that one sentence for the rest of the day, thinking about those words and what kind of story they would make. Try it sometime. Eavesdrop on the bus or at lunch or in line at the zoo. Take a single sentence out of that conversation and mentally build a story on it. It’s pretty fun. Or maybe I just feel that way because my brain is weird.

Which brings me to number five…

5. A single sentence is all it takes.

Up until I typed PUSH’s first sentence, I never set out to be a fiction writer, even though I always have bits of stories floating around in my head. I am a science writer by trade, but I knew I had a story to tell the moment this particular string of words came out of my brain: “I am standing on the bridge, and in a rush of brutal and beautiful clarity, I know.” I had the basic idea for this book scribbled down on a piece of paper and shoved into a drawer for years, but typing that one sentence on my computer changed everything. It created David and Emma. It created an opportunity for me to share their story in a voice I didn’t even know I had. Eight months later, PUSH was finished and I was ready to throw it out into the world.

Every story starts with a single sentence. The trick is to keep going. Keep telling the story you want to tell, and ignore anyone who tries to tell you it isn’t worth it.

AND, for those of you who may be wondering, PUSH #2 is written. It needs some editorial love before it can hit-the-streets, but it won’t be long until the rest of the story is told. Give me a few more months. The wait will be worth it. I promise. 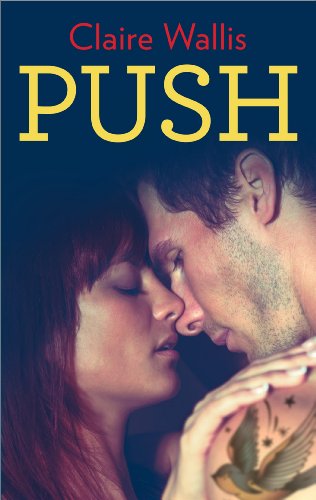 Great book! Can’t wait for #2 so we can finally figure out wtf?!? Of course, the whole time reading Push i was like, do i like this book? I mean i think i like this book? Right? But i feel so wrong and OMG is this really happening? Basically, it was a wild read! Like nothing I’ve read before and if THIS author hadnt done it so convincingly, im not sure i would have been all in!

I CAN’T wait. I have thought about this book and it’s (hopefully) sequel every SINGLE day since I finished Push. I scan the new releases every week, hoping, hoping…but not yet. I CAN’T wait. I’m dying to find out if my suspicions (assumptions?) are correct.

What a fantastically written book. One of a kind from the thousands I’ve read in my lifetime.

But will someone please tell Ms. Wallace that, no, we do not all have little stories running through our minds. In fact, even when I try (really hard) to make up even a teeny tiny story in my head the only thing I hear is …*crickets*…

Fortunately or unfortunately, I’m possessed by the music demon. It lives in my head and never shuts up. There is constantly a song or melody or rhythm playing in there. No, I haven’t tried medication yet. 🙂