And yep!! Today’s “Book Bash author spotlight” is with one of my absolute favorite authors in the world! But it’s not really with Karina… Nope. She sent someone else. Not only is Karina Halle’s super-sexy, bad-guy “Javier” live on Amazon right now in Dirty Angels, but… he, umm…. he called me today. And I still. Can’t. Breathe!!!! *squeeeeeeeeeeeeeeeeeeeee!!!*

Javier knows who I am. I dunno if that’s a good thing or a bad thing considering his er… “position” in the bad-guy world, but you know me ‘n my love for the “book bad boys”. I especially like ’em REAL bad.

*rubs hand together with devilish glee*

I’m going to replay my call with Javier take over now. Ready? *eeeeep!*

An Interview with Maryse Black

By Javier Bernal (of The Artists Trilogy and Dirty Angels)

When you’re the ringleader – the patrón – of a major Mexican drug cartel, travel can sometimes be a risky business. It’s even riskier when you’ve been banned by the DEA from ever entering the United States again. But how was I supposed to know that in a few years’ time, I’d be utterly compelled to visit Orlando, Florida, to risk blowing my cover and getting in trouble with the feds again, all for a chance to meet the wonderful Maryse Black? Such opportunities should never be given up, especially when they involve a book signing event filled with beautiful (and vulnerable) woman.

My interest in Maryse stemmed from her blatant fascination with me in the past (I recall her swooning over me a few times before – apparently she likes her men dirty) and her powerful position in literary societies. As a man with Mexico at his feet, I so wanted to meet this woman who reigned over loyal readers and grateful authors, a woman who might have possessed the same charm and ruthless influence as I did.

Could Maryse become my queen, to rule at my side? Just imagine it – together we would be unstoppable.

Still, I was no dummy. I wasn’t about to leave my cartel in Esteban’s hands again while I went off on a stealthy mission to claim this woman. I needed to make sure that my travels wouldn’t be in vain. Though I had the sexual prowess to make her see stars and Latino charisma that no woman could resist, something told me Maryse wouldn’t be as easy of a conquest.

Besides, I heard she had a husband, some rock n’ roll guy who could possibly kick my ass (or at least try). Good thing I’d become quite the fighter.

I decided the smart thing to do would be to call up Maryse and ask her a few questions about herself and the event, see if this trip to “Book Bash” was a chance worth taking.

Javier: Hola, is this Maryse?

Javier: Such a pleasure to talk with you Maryse, my name is Javier…Garcia. You don’t know me. Anyway, I’m interested in attending your Book Bash event this year.

Maryse: *gulp* *did he say Javier? *swooooooon* *I love that name* Ummm… Hi Javier! Thank you for your interest! Book Bash is a blast! What were you interested in?

Javier: It sounds all so very fantastic. I see you have some sexy authors attending. Do you think there will be any stripping or pole dancing later on or does that only happen at Mexican book events?

Maryse: *giggle* Ummm… well. Those are not scheduled of course, but there WILL be dancing. We’re having a fun “after party” after the signing. I do know one of the authors that is attending, is an excellent pole dancer, but alas, I don’t believe her pole is er… travel-sized. Then again, I guess it depends on how many tequila shots we have… *gasp*

* *facepalms* *Whoops! I shouldn’t have said that.*

Javier: Are there going to be any men there? If you could wish for any “book boyfriends” to show up, who would you want? Any sexy Mexicans with a flair for deflowering and beheadings?

Maryse: Oh well that’s easy! I do have a crush on a certain “book bad-guy”. Coincidentally enough, his name is Javier. I kind of…  love that name now. Mind you, he was SO bad, but there was just something about him… irresistible. Gorgeous, of course, but so much more than just a bad-boy pretty face. Cunning. Kind of heartless. But in another way… so much heart, too.

Javier: Interesting, interesting. Is your husband going to be there?

Maryse: Oh yes. He wouldn’t miss this. He just LOVES the authors as much as I do!

Javier: On a scale of one to ten, how good of a fighter is your husband? Does he tend to use his fists or does a little knifeplay come out?

Maryse: *snort* Umm… he needs his hands to play guitar. So… I think he’d be more of a kicker. But he’s definitely a lover. Not a fighter.

Javier: Aside from the strippers and the pole dancing, do you think if a fight broke out at Book Bash over you, you’d be annoyed or flattered?

Maryse: LOL!!!! A bit of both, I think. What girl wouldn’t be annoyed (no woman likes to have her perfect event disrupted with boy-antics). But then again… wow. REALLY? Over me? So yes… absolutely flattered. *sigh* But annoyed. Bad! Yes. Mostly annoyed. *mutters under breath* *and flattered…*

Javier: You’re a very charming and influential woman, Maryse. Tell me how you best like to use your powers? For good, as in helping authors and readers? Or for bad, as in destroying the world and everyone that stands in your way?

Maryse: Well, when it comes to books, I just want to share my love of ’em. When I find one that “rocks my world” I can’t wait to pass that potential feeling along to someone else. Nothing better than an awesome book rush, other than sharing in it, together. And in return, so many of my fellow readers pass their own recommendations back to me. It’s a win-win situation! Except of course, when we’re fighting over the same book-boyfriend. Like Javier. He’s MINE! 😉 But then again, we like to team up together against the “other” team, ’cause we know our guy is best. 😉 So… I guess… I’m all for good. Probably why I have that ummm…  penchant for the book “bad guy”. To the anti-hero. I like my “prince” on a black motorcycle vs. a white horse. Like a moth to a flame. Yin and Yang… and all that. 😉 You know how it goes.

Javier: You don’t sound as cunning and manipulative as I had hoped. Plus your husband sounds a bit like Kurt Russell Roadhouse, which, by the way, is better in Spanish. I’m afraid I’m not sure if I’ll be attending your event this year…

Maryse: *sigh* Awwwww!! I’m kind of disappointed. I was curious to see if you looked like our favorite “Javier”. Ahhh well. *mutters indistinctly under her breath*… and with your er… freaky questions, I’m thinking it might be for the best.*

Javier: Well, if I do attend, you’ll be the first to know about it…just make sure your husband isn’t present at the time.

Yep… I received confirmation by Karina soon after (when she sent me over this fun little transcript), that it was THE one and only Javier. Wow. I think I would have insisted harder that he come to Book Bash. Or… would that have been inviting trouble. Might have been fun, right? 😉

And for those of you that haven’t “met” Karina Halle’s “Javier” yet, you MUST read this —> The Artists Trilogy Reading Order. And here’s my 5-star review of the series prequel (where we REALLY get to know Javier): On Every Street. This latest release (Dirty Angels) is Javier’s spinoff. However, some of you that have not yet read the original trilogy might be wondering if THIS new release can be read as a standalone. Karina sent us this answer:

“Yup! It reads as a standalone… of course it doesn’t hurt to read it. …there is enough backstory and details about his past to enrich it but it’s an entirely new story and if you don’t read TAT you won’t in anyway be lost…” 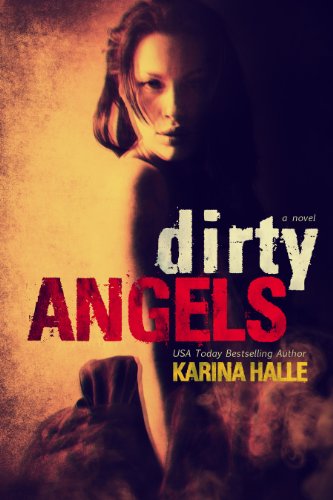 He almost made me his queen. Almost. 😉 *snort*

Hysterical! This is awesome. So fun and so nice of her to send that to you.

Made my day, that’s for sure. I giggled like crazy, answering him… all swoony-like as if… well… you know. 😛

Whew!!! I still got the sale price!! Yippee!! I have been busy and didn’t have time to read your blog as I do every day or should I say study your blog as to which book is next!!! Can’t wait to start reading it!!! This weekend was a re-read weekend. Love to re-read some of my fav’s!!

That is so great! I just finished Dirty Angels. I love me some Javier!

Goodness, I haven’t read the books but that interview is AWESOME.

LOL! Thank you Fabi. I was all flustered and giggly. 😉