Here’s a mini-review before the MAIN review for those wanting to go into this one blindly –> Nothing is really spoiled in the review below, but I do let on to something I had no idea would happen to me when I first read book #1. And I really enjoyed the surprise. So you can probably read this review below spoiler free (other than realizing lots of “crazy” has already happened in this series so far) that makes us flip-flop in our loyalties. But if you want to go into this not knowing a thing, I’d say just know that we’re loving this series. It’s an absolute thrill-ride and there are wonderful bouts of adrenaline and emotional surges. Sexy, steamy with moments of romantic intensity. Plus that initial deep-seated need for revenge that is making a mess of these characters.

Revenge is sweet but it’s a sweet poison.

And THIS prequel made it THAT MUCH BETTER!!! Wonderfully detailed, lots of questions answered and a whole slew of new questions cropped up. What I thought I knew in book #1, where I thought it was going, well… I ate my assumptions after this one. Who knows, now, what’s coming our way? The “Artists Trilogy” world is our oyster!!

5 stars for this book!

Now time for my longer review:

Javier, Javier, Javier. Once upon a time (in book #1 – Sins & Needles), you just… scared me. I “knew” who you were in theory, after all, I was on the run, I mean… bad-girl grifter “Ellie” was on the run, in hiding, evading bad guys. Like you, for instance. The baddest of ’em all. And from her thoughts I knew she had every reason to keep running.

After all, considering who you are, what you do, and what she’s seen, yeah. Bad guy. Oh and… the fact that she stole your prized car in her escape. And ummm… that she duped you. *eeeeeep* Well, I knew that if you ever caught up to her, there might be no more of “Ellie’s” story to tell.

And I was slightly irritated by you, or the idea of you. From what I could tell at first, you would be the typical bad-mobster-guy antagonist, propelling the action forward, giving us a few adrenaline rushes by way of shoot-outs, narrow escapes and that never-ending chase. I thought your ruthless relentlessness might exhaust me. While we hadn’t really “met” you yet (at least, not in detail), your character kept popping up and interrupting my romance story with the unbelievably sexy Cam. And he had his own bad guys to contend with. GAH!!! You bad-guys were all making this story action-packed and I wanted a bit more… “romance-packed”.

You were harshing my Cam-love!! Tee hee!!

But then, I met you. Scary was an understatement. You’re cool, calm and collected and there’s an obvious danger lurking behind that smile. But there was something else. A flicker of intense emotion that sparked my interest.

But at that moment, this man saw me. The real me underneath the bombshell mask. I felt like he must have seen everything.

Peaked my curiosity. I could tell, there was so much more to you than just “the bad guy”. More to your persistent “Ellie-chasing”. I started wondering if you were chasing her to get your revenge and make a point (nobody crosses Javier!!). Or… were you stalking her? ‘Cause per my own book-stalker experience, they are intense and obsessed with the person they’re stalking. It’s about claiming, not necessarily maiming (I mean, you know… the “romance-book-stalkers”. 😉 Not the real life ones.

It’s just when I chose Javier as my mark, I never thought my mark would choose me. Because that’s what Javier had just done. I wanted to win over his heart so I could get what I wanted. But I had a feeling he was about to get to my heart first.

And while I was nervous that my fellow readers would think I was nuts for developing a crush on you over Camden, I had to be true. And I said so in my Sins & Needles review.

Maryse: Listen. I think I might heart Javier a bit…. I heart CAMDEN for SURE!!! But Javier *spoiler* What kind of story might THAT bring us, you know? *spoiler* Now I’m rethinking this…

A few piped up and they were with me. And then this book came out. Your book. The prequel that chronicles the old days of Javier and Ellie. Or should I say Eden? And now team-Javier has grown so large. I KNEW it!!! I just wanna gloat in my “Javier-is-crushworthy” instinct, ’cause I knew our small group wouldn’t stay small for long.

“Why am I good to you?” he repeated, his lips brushing against mine as he spoke. “Because I can see you are broken. And I want nothing more than to put you back together.”

*sigh* Javier… oh Javier. That was just… *sigh*. And then there was more. SO MUCH more truth, so much heart from you. And your own pain.

Oh right. There is that… thing. Oh. And that other thing. Grrrrrrrrr!!!! YOU!

Kirsten: Can I really *spoiler*. My gosh Maryse I’m a huge Camden fan and I swooned… SWOONED for Javier. But how *spoiler*? Why *spoiler*? I can’t stop thinking about this one.

Kirsten: I know. When he *spoiler* I was so frightened *spoiler*, and then when he showed up at the motel… OMG I forgot all about *spoiler* and just wanted to hug him, and tell him it was going to be okay. … WTH. Yeah I knew it was coming but why? Why the hell? Then I’m thinking did he *spoiler*? No, he *spoiler* what the heck. … Now I might be able to get over *spoiler* despite the *spoiler*, but he *spoiler*! … I guess maybe Javier saw him as *spoiler*, but come on. I’m too confused *spoiler*, but at the same time he’s so swoon worthy and some of those lines… brilliant. Karina really has outdone herself.

Right, right. Exactly Kirsten!! And I know you struggled with admitting that, considering our Facebook conversation where you insisted you were still team Cam and the obvious reasons why.

Javier, well… you know. She has a point.

Maybe “crush-worthy” isn’t quite the right description for you. *shrug* Meh, who ever said I was sane in my “book-crush” choices?

That’s what’s fun about books. You can make the bad decisions… choose the bad guy, and still enjoy the ride like crazy, ’cause there’s always more to the story, right? Authors like Karina give us reasons. And anyway my crushes are what they are and I let myself go with ’em ’cause it’s safe and I can, no matter what ends up happening in the end. *grin*

It was dangerous to love that feeling, but I did.

Such a wild ride, Javier and it just got wilder when you fully entered the picture. I’m DYING for #2, now. Considering what we knew once we hit the end of Sins, and now that I’ve read this one, I have a WHOLE new outlook, and I really don’t have any idea where it’s going. And I LOVE it that way. 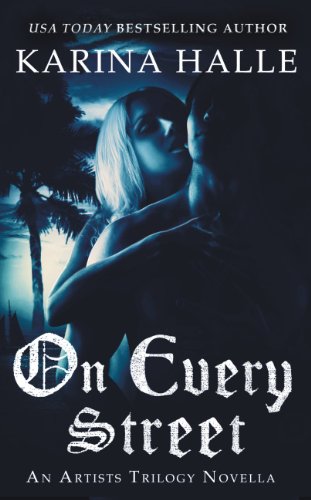 Starting this tonight and I’m so excited. Great review and happy 4th anniversary!

Thanks Sharon!!!! You’re gonna have SO much fun reading this!!!

Loved your review!! You captured everything I was feeling when I read my ARC.. I must say, I loved Camden in Sins & Needles. But hot dignity damn.. I lovvveeee Javier.. He just did it for me.. It’s been days since I’ve read OES, and I’m still thinking about Javier.. *sigh*

Great review Maryse. I am now so anxious for Shooting Stars!

Thanks guys! Me too, Johanna. I’ve been thinking about Javier for days and all of his intense reactions. I totally felt him. And Ellie, too. I bonded with her in this one. Felt as if I could relate so much more to her now. This one was great!

Should I read this one before sins and needles or after?

WOW! I knew meeting Javier in Sins & Needles was gonna make me crave for the back story between him and Ellie/Eden 😉 But oh my!!! Maybe I need to read S&N to find my Camden love again……..

Sorry but I hate Javier even more after just finishing reading this, cant wait for next book.

Looks like I’m going to have to put down I Am Her ( which I’m loving by the way) for a little bit and read this!!! Sooo excited 🙂

Just finished On Every Street…wow. Loved it, Ellie is a great character. I really love the way Karina Halle writes – I am addicted to everything she writes.

Good gosh, Maryse! This book crushed me! I stayed up until 4am reading it and had to get my kiddo to school 3 hours later. I’m crazy about Javier and I don’ t even remember Camden right now. I may need to retread Sins and Needles again just to rekindle some sort of spark for him. I really need to talk about On Every Street so, if you get enough request to do so, will you start a discussion thread?

I was just going to start one, but it looks like there is already one in progress!! YAY!!

I’m reading this tonight (a bday present to myself! Woo!) and I CAN’T. WAIT. I’m going in with a crush on Javier already — Karina had me at “he looks like Gael Garcia Bernal — and I’m interested (maybe hoping?) to see if that changes.

JAVIER! JAVIER!!! I’m not sure il be able to make it till may!! I liked Camden but he is so meh compared to Javier! I’m hoping Ellie ends up with Javier!!! (I was extremely intrigued by him in Sins and Needles and now I think I’m obsessed!!)

I only have one thing to say “Camden, who?” Of course I could change my mind in the next book, LOL

Ok. Still on Team Camden. HOWEVER…. OMG, I am angry at myself for feeling so much for Javier… The “enemy”… Aargh!!! He is a poor tortured soul that needs to be saved, right?!?! *sigh* I need to read Sins again now. I feel so conflicted!!!

I can’t wait to read these… they are on my TBR list. Great review Maryse!

WOW!!! I am …… ummmm…..completely drained!! I feel like I am holding my breath waiting for the next book so I can breath again. Then again who am I kidding I am only gonna keep holding my breath till I know what happens. I am soooooo too wrapped up in Karina’s books!! And sweet girl I love ya for it!! And to add my two cents into the whole Javier or Camden drama……I am sooooo for Camden!! I even read On Every Street first…but I can’t help it Camden knows HER. He is the only one she has laid her ugly bare to. AHHHHH my heart at the end of the book!!!! I only have to hold my breath for a little over a month….I can do it…pffff yeah right!! Oh wait… I have no choice. ;/