X
You are here: Home / Behind The Books / Five Fun Facts About “Broadway Beans” (famous actor & the normal girl!!) & a signed book giveaway!

Broadway Beans by Karen Cimms!! <— I dunno how I missed this one when it went live this year (considering he’s a famous actor and she’s a “normal girl” – the ultimate fantasy and I’m all over that!!) but I’m so thankful that the author is today’s newsletter sponsor, ’cause it’s right up our comedy romance alley!! And that title made me go… hrmmm? But it’s actually pretty clever since that’s what the coffee shop is called, where she works. 😉

P.S. There are quite a few amongst our crew that went crazy for another series by this author!! Remember that super-angsty rock star series Of Love and Madness? Yep!

Nay: Another I loved is Karen Cimms’ Of Love and Madness series. Some of the most wonderfully angsty books I’ve ever read, but those also handle some pretty heavy stuff…

Mind you, Broadway Beans has a totally different feel (comedy romance instead of heavy angst). We can all you some lighthearted chuckles and swoons, now, can’t we? 😛

Aiden Winchester: Call it self-preservation, but I need to get out of Hollywood. My heart’s just been shredded by my longtime girlfriend. Worse yet, we have to pretend we’re still America’s sweethearts until after our next picture is released. With the next six months looking more like American Horror Story than a Lifetime channel love story, I’m heading east to make my stage debut.

Franky Marchesi: I love my close-knit Italian family. I’d probably love them a lot more if they weren’t in my face all the time. So when my best friend begs me to move into her Upper West Side brownstone—rent free—to take care of her new pup whenever she travels, I’d be crazy to say no. But while my living expenses are covered, I still need to make some money if I’m ever going to save enough for college. So with a little luck and no experience, I land a job as a barista at Broadway Beans, a coffee shop in the theater district. But on my first day, I almost kill the hottest guy I’ve ever seen. With a latte. Who knew making over-priced coffee could be so difficult?

It’s a hell of a great way to meet someone though.

A modern-day “Moonstruck,” BROADWAY BEANS is a friends-to-lovers romantic comedy.

NOW FOR THE GIVEAWAY

Karen Cimms is giving away a signed copy of Broadway Beans!!

How to enter for a chance to win it? Just leave a comment below and by 10pm EST, Sunday July 21st, 2019, I will randomly select one lucky commenter as the winner.

The winner will be contacted and will have 48hrs to respond confirming their mailing address, so if you are picked, do not delay or you will lose your chance. The signed book will be sent to the winner directly by the author. 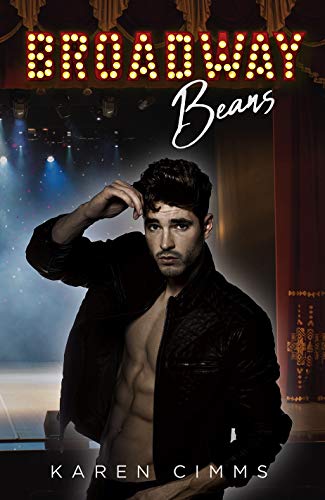 Broadway Beans is delightful! Absolutely loved it, as I love Karen Cimms as an author. Using Andrew Biernet one of Karen’s favorite as a cover model and vision for the book made it easy to read and picture Andrew in the book while reading. The At This Moment series is heart warming, heart wrenching, and just down right so very good.

This is a 10* read… so funny and an awesome storyline… would love a signed copy…love this author!!

I can’t wait to read “Broadway Beans’.! I have read and reread your previous ” Of Love and Madness “book series!

This looks good! I haven’t read anything by this author yet, but I love trying new authors! Thank you for the chance!

I haven’t read any Karen Cimms novels. I would love to start with this one.

Love the premise! Thanks!

Haven’t read this author and am very curious.

I haven’t read this book yet, but for those of you who love angst, you MUST read her Of Love and Madness series. It’s AMAZING!

This book looks really good! Famous actor and a normal girl – how can you go wrong? Thank you for the chance to win this book.