X
You are here: Home / Behind The Books / Kristen Granata’s “Fighting The Odds” is LIVE & she’s sent over a Five Fun Facts, an excerpt and we’re having a giveaway!

<— MMA FIGHTER ALERT!!! Fighting the Odds (The Collision Series Book 4) just went live this month, it’s available to read for free in KU and and author Kristen Granata is todays newsletter sponsor!! To celebrate her new release, she’s giving away a signed copy!!

1. The main character, TJ, is a fan favorite from my new adult series, The Collision Series. He made appearances in two of the books, and every reviewer kept asking, “When is TJ getting his own book?!” He’s such an impactful character, I felt so much pressure to do him justice.

2. I suffer with depression & anxiety. Writing TJ’s story was important to me because I wanted to send a message to everyone out there who’s suffering in silence: You are not alone. Life knocks you down but you have to get up and keep fighting. I hope that if people see the horrific struggles TJ went through, they will feel inspired to overcome their own personal struggles.

3. I had to do a LOT of research for this story. I needed knowledge about heroin use, foster care, homelessness, miscarriages, AND what it looks like when someone dies after being strangled to death! I’m anxiously awaiting the FBI to knock on my door inquiring about my questionable web searches …

4. This being my fourth book, my sex scenes have definitely gotten steamier! I cringe whenever I write them because both my dad and my 80-year old grandfather read my books. I’ll write a few sentences and then think, “Oh my God! Papa is going to read this!” It’s hard to get out of my own head and write the sexy details, but my wife reads it and helps me amp up the sex.

5. Readers have said that my stories are “more than just romance,” and that is my mission. I don’t write for the sake of selling a love story. I write because I want to change people’s perspectives. I want to console those in pain. I want to inspire those who need it. I hope The Collision Series does that for readers.

I hand the bartender my fake ID and settle against the back of my stool. She pops the top off the bottle and slides it my way. I take a long swig.

“You don’t strike me as the beer type.”

I hold my hand up without looking at who the deep voice belongs to. “Save your energy for someone else, please.” Can’t a girl sit alone at a bar without being hit on?

“It doesn’t really take much energy to have a conversation, but thanks for your concern.”

I roll my eyes and take another few gulps of my beer. I pretend to watch the TV above the bar, though I can feel the stranger’s eyes on me.

“Who are you rooting for?” he asks.

“The fight you’re staring at so intently. Who are you rooting for?”

“I’m not rooting for anyone. MMA is a barbaric sport. How these guys get paid mega bucks to beat each other up is beyond me. Just another testament to our Neanderthal society.”

“Those guys aren’t just beating each other up.”

I gesture toward the screen. “Those two dudes are throwing punches at each other. That guy is bleeding profusely from his nose. They certainly aren’t doing ballet.”

The stranger chuckles. “Okay, so they are fighting. But there’s more to it than that. It takes skill and training to do what they do.”

“Oh, look. Now they’re on the ground. That guy’s going to lay on top of the other one for the next five minutes. You’re right. Looks like they’ve had a lot of training.” I drain the rest of my beer and stand. So much for enjoying a drink alone.

“You should stay and watch the fight. I’ll prove to you just how much skill these guys have.”

I spin around to face the annoying stranger, allowing myself to look at him for the first time.

I clamp my mouth shut to keep it from falling wide open. Brawny. Strapping. Muscular. Built. None of the words coming to mind seem adequate enough to describe the Herculean god sitting before me. It’s almost a sin he covered himself up with all those tattoos. Almost. The intricate pieces of art twist around his muscular arms, all the way down to his knuckles. A tease of ink pokes out of the neckline of his shirt, stopping halfway up his neck. Every inch of his body has trouble written all over it.

His face though … his face is a different story. It’s so handsome it looks like it doesn’t belong on his body. The icy-blue of his eyes is warmed by his smile, which is complete with a set of dimples. A backwards baseball cap covers his hair, but his thick brows and scruff peppering his chiseled jawline are as dark as a cup of coffee.

He’s an oxymoron. The face of an angel with the body of Satan himself. A dark ray of light. A friendly nemesis. The man is menacingly beautiful.

And I’m gawking. I clear my throat and try to remember what it was he’d asked me. “I’ve had a long trip. I’m going to call it a night.”

“Where you coming from?”

“And the first place you come to is a bar?”

My eyes narrow and I prop my hand on my hip. “Don’t judge me. You don’t know a thing about me.”

His hands shoot up. “Hey, I wasn’t judging. I was just making an observation.”

And NOW…. for the giveaway!!

The author is giving away a signed paperback copy of Fighting the Odds with a matching bookmark.

How to enter for a chance to win this prize? Just leave a comment below and by 10pm EST, Sunday September 1st, 2019, I will randomly select one lucky commenter as the winner.

The winner will be contacted and will have 48hrs to respond confirming their mailing address, so if you are picked, do not delay or you will lose your chance. This prize will be sent to the winner directly by the author. 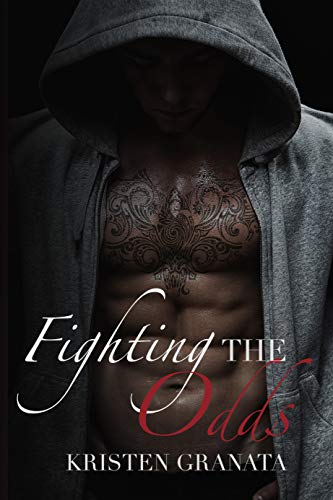 Thank you for sharing. This is a new author and the book looks really good. I love books that incorporate real life issues into it. I am looking forward to reading this. Thanks for the chance at winning!

All of my books in this series touch upon those hard-hitting, real-life topics. It’s something that’s important to me as a writer. Thanks for entering!!

This one sounds really good and I love the cover!

Thank you!! I enjoyed creating this cover! ::drool::

Put this on my sample list but would love ❤️ the paperback. The other books in the series look good too!!

Thanks so much! You won’t be disappointed!

Yeah! TJ’s Book! I just read the other 3 since Jan. I agree he needed his own book!

He really needed his own book. I loved writing his HEA!

Can’t wait to read this! The cover is perfect!!

Thank you! It took me a while to find the right guy with the right tattoos. (Aka – I spent hours looking at hot shirtless men!)

#2 The depression blurb got me. The struggle is real. And the added bonus? An MMA fighter!

The struggle most definitely is real. Glad it struck a chord with you. All of my stories are laced with mental health themes!

New author! Would like to read this one. Thank you for the giveaway!

New author! I would like to read this one. Thank you for the giveaway!

Oooh, I must read this one. That cover!!!

Thank you! Isn’t he delicious?! haha

I read Fighting the Odds and loved it. It was the 1st book I’ve read by Kristen Granata, and have plans to read the other books in the series.

Yay! So happy to hear this! Thank you.

What an exciting book! Great excerpt. I’d love to read more. Thanks for sharing.