Thank you to author Freya Barker for sponsoring this week’s newsletter and celebrating with a sneak peak and a book giveaway!! 😀 She says: “10-CODE is the fourth and final standalone novel in my Rock Point FBI series.” And, it’s available to read for free in Kindle Unlimited!! YAY US!!!!

Lisa: This was a terrific read! Two single parents of sons and a predator of boys on the loose. Sexy romance and a taut thriller/ suspense story.

Maryse: Eeeeep!! I love the sound of this!!!

Total blurb jolt for me!

“…As a forty-one-year-old mother of three boys, working two jobs, Marya Berger doesn’t have the time or energy to consider a relationship. Especially after a lifetime of poor choices in the romance department.

But when the disappearance of a young boy strikes a little too close to home, and a younger man she’s tried to ignore offers his help, she doesn’t stand in the way…“

Ready for a taste-test?

“You going for coffee?”

I stop outside Damian’s office and stick my head around the door.

“Yeah, you want anything?” I ask him.

“Come in for a minute, and close the door.”

I do ask he asks, and sit down across from his desk. “What’s up?”

His face is impassive but his eyes are keen, so I don’t even bother pretending not to know what he’s talking about. My hackles are up.

“My wife is her friend.”

Damian leans forward, elbows on his desk. “Right. I see you’re not in the mood to listen, but I’m going to say this anyway. I’m not sure what it is you think you’re doing, and I know you weren’t around when things went down with her, but we’re talking about a woman who has been played and knocked around enough.”

I can feel my nostrils flare when I release the breath I’ve been holding, along with my temper. I match Damian leaning forward over his desk, getting in his face and measuring my words. “When have you known me to toy with a woman? Any woman? Ever?”

It takes a moment for the fierce intensity to leave my boss’s face. He sits back in his chair and runs a hand through his hair. “Jesus, kid.”

That term rubs me the wrong way. “Hardly a kid,” I bite off. “Old enough to know what I want.”

“She’s a single mom in her early forties with at least ten years on you.”

Another brush of his hand goes through the hair streaked with silver. “Shit.” His eyes come up. “You mess with her, hurt her in anyway, that’s going to make my wife very unhappy, which in turn will make me extremely unhappy.”

“So noted. Now, if that was all?” Pissed, I shove the chair back and get up, swallowing down my anger.

“Yeah,” he mumbles, but when I start walking out of the office he stops me, adding, “Large Americano—black—and grab me one of those brownies if she has any left.”

NOW FOR THE GIVEAWAY

Freya Barker is giving away a signed copy of 10-Code!!

How to enter for a chance to win it? Just leave a comment below (or better yet, tell us your favorite “unconventional love” guilty pleasure genre) and by 10pm EST, Sunday June 23rd, 2019, I will randomly select one lucky commenter as the winner.

The winner will be contacted and will have 48hrs to respond confirming their mailing address, so if you are picked, do not delay or you will lose your chance. The signed book will be sent to the winner directly by the author. 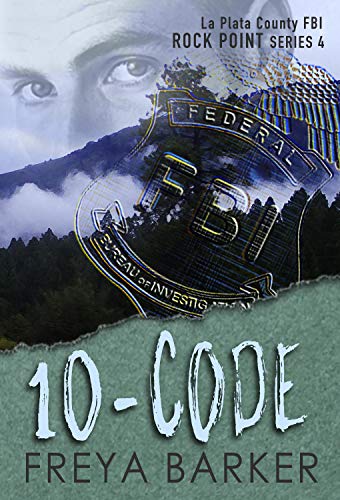 Read this and freaking loved it. I’m a lover of second chances – especially when there is a “secret” baby involved

Gah!!! I loved this book!!! My guilty pleasure is over 40 romance with an Uber alpha hero.

This looks good. Thanks for the chance! Hmm…I don’t know what the genre would be but Cara Mckenna books. After Hours, Hard Time and Willing Victim come to mind! 🙂

Loving this series. Who doesn’t love a single dad story.

My guilty pleasure
Is definitely the older woman/younger man! This is right up my alley!

Loved this book so much!! Single dad stories are always a favorite for me

I’m reading this book now and it’s fantastic! I love everything Freya writes!
Thank you for the chance!! xo

I LOVED this book!!! Freya is AWEMAZING!!! Other than OM/YW I love second chance romances! Thanks so much for the chance

A man who knows what he wants and will do everything to get it. A book I would love to read anytime!

I have never read this genre. I usually read second chance or romantic suspense. Thanks

Thanks for the chance to win. I love a good romantic suspense and the younger man/older woman just makes it sweeter.

My favorite genre is paranormal romance….love it!

I love paranormal romance! My very favorite, and I read a book a day usually…