X
You are here: Home / My Book Reviews / Alternative / Book Review – Beyond Eden by Kele Moon

Overall, after taking it all in, and living each moment with the characters, I can say I really really liked it. Loved it? Sure, in a different way, but yep. I’d easily read something like this again.

But at first, I hovered on the edge, feeling addled and a bit “homesick” for my contemporary romances. Not only were the circumstances unfamiliar to me, there was a chance I was going to be devastated at some point right? I was unsettled from the start.

Maryse’s Book Blog: I’m reading Beyond Eden. I like it, but I’m having a bit of a hard time connecting. I’m connected, but I’m nervous. It’s just a different *feel*…

Michele: I was the same way when I started it Maryse. lol. But the girls kept at me and I got used to “IT”. lol!!!!

Lise:  Totally different *feel* – I just finished reading Playing for Keeps as a relief from BE.

I struggled to relate, I couldn’t connect. I couldn’t fall for them, the indecision, the secrets and “the game” … it was messing with my head.

“The only reason you want Eve as badly as you do is because you know you’re going to lose your favorite plaything and your want a new one.”

“It is true,” Paul said as his heart clenched for Danny who was much more unhappy than Paul or Eve could ever be.

“Go to the clubs. You’re the best at what you do and everyone knows it. You’ll have your pick of pretty pets. Find one of them to amuse you, find a whole harem because you can’t have Eve. I’ll never agree to that.”

And yet, there were lighthearted silly moments that had me giggling (a certain “scarf” scene comes to mind).

But I took it slowly (a couple of evenings of stops and starts to get to 50%) and once I hit the middle I didn’t put it down. Either I finally connected, or I became accustomed to the mood and flow of the story, let myself go and “went with it”. While I was still discombobulated living in this tenuous love affair, I was in, I was finally feeling them, and I had to know where it was going.

… a smile tugged at his lips in response, making him look almost evil. “Love me or not, I’m going to make you mine.”

Eve shuddered, her eyes drifting closed. “If you say so,” she whispered, and then parted her lips in a silent plea for more.

“I do,” he breathed against her lips.

Here’s a quick synopsis: Danny, Eve and Paul grew up together in Florida and were the best of best friends. Danny was the indisputable gorgeous bad-boy, while Eve and Paul were high school sweethearts who were truly in love as much as two people could be. Eve always was always attracted to Danny, she didn’t think he’d ever look at her that way. Paul was her perfect mate. Her perfect love. And she was his.

Eve would be lying if she said she hadn’t been attracted to Danny but Paul had been so sweet and open about adoring her. Falling in love with him had been easy. She had become a woman with Paul and her heart had never stopped beating for him.

And as they entered their adult lives, responsibilities, education and job opportunities came knocking, separating Eve from the men in her life. She moved to New York, breaking hearts in the process.

Ten years later, Eve finds herself back in Florida, and back in their lives.

She was as lost as Danny, stuck at a crossroads in life, and he couldn’t help but wonder if their paths had crossed at the right time.

A very difficult situation between three very best friends as each one was (once) in love with another, and each other, or the other. Was? Is? Or…how about… I’ll let you figure it out. 😉

… white hot jealousy swirled up from a dormant place inside him where he’d kept the dark, painful feelings of his youth locked away for the past ten years. It seemed like a lifetime ago he felt the crushing weight of envy and hurt but his body and soul remembered it easily. He was older, he was wiser but it made no difference as turbulent emotions swirled inside him.

Let’s just say the steamy moments are not lacking, vividly detailed, and intense. At times tender, at times dirty, and at times, shocking. Sometimes all three. With all three (hey! I’m just sayin’ it like it is. It’s not a spoiler! I mean… see the book cover? That says a lot. Tee hee!!!)

But there is depth to “them” as a whole and each one struggles individually with issues about who they are, how they live and what they do. There is unavoidable upheaval as some deny themselves, and others are hurt in their new lives and explorations together. Privately, their roles change, fluctuate, and are tested. Publicly, social expectations, stigmas, and all the drama that goes along with it.

And I was hurt. For a few different characters, actually. Many times (not just at the *crying* scene). I had a hard time figuring it all out, and while mentally, I understood it, my heart had it’s singular moments of jealousy, and of second-guessing. In fact, I still have a few questions… a few theories, even.

It’s big, I really liked it and I’m glad I read it, but I will wait a bit before moving onto book #2 in the series. I have to know more but I need a deep yet fluffy romance, next.

Then again, It’s been a few days now, and I’m still thinking about these characters and certain scenes that I’m feeling even more now, after the fact. *hrpmh* Almost as if I miss ’em.

Interested in the series? There are 2 books so far with a 3rd on it’s way!!  –> Kele Moon – Eden Series Reading Order

P.S. Oh. The nicknames? I still haven’t latched onto those yet.

I’d almost say it was the thing that distracted me. But as with most things, at some point you get used to it. Whatever floats their boat, ya know? 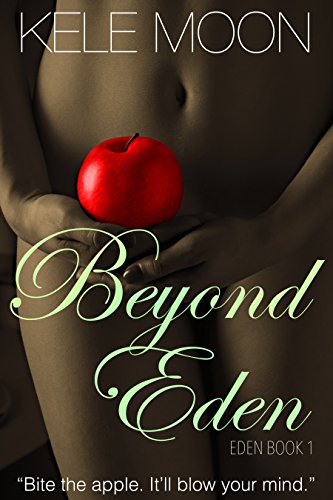 I agree.. one of those book that I liked but could’ve been better. Definitely didn’t like the nicknames & I just felt everyone was too needy all around.

Okay so I just finished both of them… and the first one was good I was expecting SOOO much more though because everyone talking about it making them cry.. I may have gotten a little misty eyed at one point but that was it.. I have to say that YES I liked the dirty talk im a sucker for it.. haha but I am glad that she did the second to fill you in on what happened in those missing years.
BUT overall I guess because I was expecting something more from it I wasnt all that happy with it but the m/m and m/f/m thing didnt bother me it was pretty hot! lol

Brandy, I didn’t cry but there were a few moments of tearing up for sure. Although… I did sort of get a *spoiler* about a certain moment that may have hindered my initial reaction… ah well. It still had some extremely emotional and angering moments.