A Midwinter Fantasy– sent to me by the publisher, and currently only available as an e-book but will be in print next year.

This was a sweet short story in the Percy Parker series, that lead me through many emotional revelations, and a heart warming tale for two very special characters. As the cast of characters adjust to a new life without their “Guard Powers” (now that their destiny has been fulfilled), and suffer the loss of one of their team members, two are specifically due for a personal awakening.

Head mistress Rebecca Thompson, hopelessly in love with Alexi Rychman (who has since married Percy) lives, dejected over a love she was never able to experience, and is even more troubled since the death of her very close friend. Depressed and living in seclusion as she nurses her wounds, she douses herself in self pity and rejects anyone who tried to comfort her, including one man that truly does love her.

Vicar Michael Carroll, a clergyman. The sweetest and most gentle of men, the true heart of their team, has secretly been in love with Rebecca since they were first introduced as teens. And, at a time when she most needed it, Michael made her aware of his feelings.

“I know we cannot always choose who we love. And I know how it hurts to see the one we love look adoringly at someone else. I know; I have been watching you watch Alexi for years.”

Her obsession with Alexi, however, leaves her blind to the true love that she might be capable of experiencing. A lifetime devoid of that special connection, she insists on not letting anyone else into her heart. Michael hesitant to pursue her, nervous to follow through with his heart’s desire, feels even less worthy of her love, now that he no longer has his powers. What can he possibly offer her?

Her presence. He’d subsisted on that meagre portion for just over twenty years, so how could he now ask for more? What was to be done about it, and what if he did something wrong? She was so tender, so raw and so utterly not in love with him. He was paralyzed with fear, and the feeling was unprecedented. For years he’d been the great Heart, so named by the goddess on that first day the Grand Work brought them together. Now he was a mortal man, a simple vicar. And a doubting one at that.

It’s time for some divine intervention (ok, more like, ghostly intervention) when some very special ghosts consult with Percy and plan to show the  two a past, present and future like they never expected (with a little potential danger mixed into this haunted trip). Yes, it’s an adorable take on “A Christmas Carol” and what better time to read such a sweet tale. And, in this case, the ending does surprise, with a little added *something* that I didn’t see coming.

Author Leanna Renee Hieber doesn’t fail to impress with her beautiful imagery, her emotional intensity, her clever wit, and deeply touching and inspiring message. This narration left me in reverie, reflecting on life, and inspired a different perspective in a world of light vs. darkness.

➔➔➔  Looking for my must-read recommendations? Browse my 5 star and 4.5 star and 4 star reviews. 😀 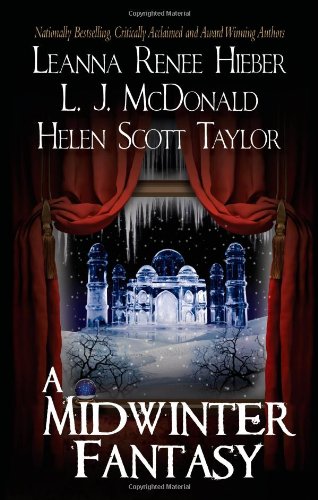