All I Want for Christmas Is a Vampire (Love at Stake, Book 5)
I finished this 5th book in the series, a couple of days ago, but didn’t find that I had anything “new” to be excited about with this one.

The book is about a human female (Toni) who’s friend was attacked by the evil vampires (the Malcontents), and has been hospitalized (and considered delusional since she is telling authorities that Vampires attacked her). Toni is intent on proving her correct, and therefore places herself in a situation to be attacked (which she is). While the attackers nearly rape and kill her, she is saved by Connor (a good Vampire from Angus Mckay’s team), and she helps him fight of her attackers. Her skills impress him, and he requests that she join his “human” team of daytime guards.

Toni takes advantage of the situation (despite hating all vamps) and now sees an opportunity to infiltrate their world, and get proof of their existence to get her best friend out of the psychiatric hospital.

She meets Ian, and instantly, their “push/pull” turmoil begins.

While I enjoyed the book, and loved Ian McPhie (the sweet Scottish vampire), it was basically following the predictable pattern of this series;

Don’t get me wrong! That is what I like (mostly). When I read these books, I want the adventure, I like the danger, but I thoroughly lose myself in the romance. However, I do prefer a little “thrill of the chase” (and maybe even a love triangle or two throughout a series). In the “Love at Stake” series, while the slight “angst” is there, it is never intense.

Actually, one part of this book that struck me most was when Ian gets a little bit of an “attitude” towards Toni, (towards the end of the book) and tells her:

“I have never lied to you, Toni. I said from the beginning that I wanted a Vamp.”

Oooooh that one stung, and I was actually impressed that it was “going there”.

Perhaps that is why I loved the 2nd and 3rd book in the Black Dagger Brotherhood series. When it came to “Zsadist”, his heart needed to be conquered, and his apparent disinterest and resistance towards the beautiful vampire (who had her heart set on him), enraptured me.

Another thing that irked me somewhat in the beginning of each of these books, are the corny “sexual innuendos” that the males say to these females, that they have JUST met. No matter how good looking a man is, if I was to hear some of these “crude” suggestions in real life, I would roll my eyes and walk away. UGH! I just can’t believe that any guy (especially these old fashioned, romantic Vampires, who supposedly respect a woman) would dare say these things. I just didn’t buy it.

Examples (they are discussing Toni’s ability to guard the Vampires while they sleep during the day):

“Lass, ye would never pin me.” He leaned towards her. “I like to be on top”

“Ye think I was flirting?”

He smiled lazily. “Sweetheart, I can do it all night long”

Oh DOUBLE ICK!!! There is more of that where it came from, but thankfully, Ian eventually finds his personality and leaves the creep behind!

Despite these slight annoyances, I still enjoy the lightheartedness of the vampires, and their complete abandon to love. I will be looking forward to starting the next two in the series! 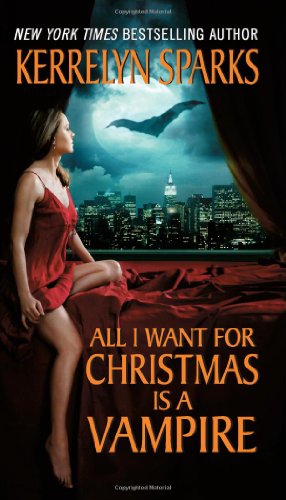 Hey Maryse, I’ve just started this series and wanted to know if Connor has a book?

His will be published next 😉 I can’t wait!