Any Way You Want It (Bourbon Street Book 1)
After a crazy week of work, appointments, and other responsibilities, I was  finally able to repose at the end of the weekend with a gratifying tale of passion.

Immersing myself fully in the book was rocky at first. The weekend was here, but the commotion was abundant. We had a sudden plumbing emergency (when the shower faucet decided to pop right off, spraying water everywhere), followed by the dogs barking incessantly for attention, and finally the husband who felt the need to express his boredom through dramatic groaning. Let me tell you, these distractions definitely tried to put a damper on the emotional ambiance of the story. However, once I had everything settled, I read (mostly uninterrupted), for hours on end, yielding to the romance that encompassed me.

This story, set in New Orleans, is about a trio of girlfriends who take a quick vacation in “The Big Easy”. Maggie (the leading lady in the story) had her heart recently broken by her ex, and after throwing herself into her work, was eventually persuaded by her caring friends, to take a load off.

One evening, as the girls pass a nightclub on Bourbon street, Maggie hears a sonata that is playing (one that she is studying as part of her work, and as far as she knows, is completely unknown). She enters the club to investigate (integral to the plot, but I will let the book tell you the rest) and she locks eyes with the handsome musician who was at the keyboards. Their attraction to each other was undeniable, and a game of pursuit and retreat by both parties is set in motion.

An intoxicating scene (despite seemingly innocent) where Ren (on intermission from his set) invites Maggie to go out with him after the show:

“What are you drinking?” His breath was warm against her skin.

She closed her eyes briefly as a shot of desire ricocheted through her body.

He straightened, reaching for her hand. He lifted both her hand and glass to his mouth and took a sip, then grimaced.

“I know a place that serves better drinks. Want to go there with me after this last set?”

“Sure,” she said, both scared and thrilled with the idea of being alone with him. Funny how quickly her wine-fueled bravado could evaporate.

He grinned, obviously pleased she had agreed. “Good. I’ll try to make this set a short one.”

He reached for her hand again, and again lifted both her fingers and her glass to his mouth. He took a lingering sip of the cheap wine, watching her reaction over the rim of the cup.

She breathed in slowly through her nose, trying to calm her thundering heart. God, he was so sinfully sexy.

This scene accurately illustrates the mood of the entire book. Very titillating, and deeply suggestive. They are simply wrapped up in their own little world.

Maggie, a pretty, yet shy and modest girl, felt the need to have a “fling” to help her get over the issues she had with her ex. Ren (the musician/singer) was all too willing to be the other half in this tryst with her. While he was accustomed to flings with vacationers, and one night stands with the provocative females that flirted with him at the bar, there was something about Maggie that reached deeper into his soul (more than he was comfortable with).

Although she was deeply conflicted with the nature of such a fling (her attraction to Ren was more intimate than a one night stand could offer), she decided she would simply live in the here and now, and abandon herself to a no-strings attached affair. While Ren’s honesty about not being able to offer her anything more, was somewhat unsettling, she felt the need to divert from her usual nature, and explore something new. She was on vacation, after all. It’s not like she could offer him anything more either.

“But we have to keep this fun and light, and not take it anywhere beyond a good time.”

Maggie pulled in a breath. That small hesitation worried him. But then she smiled, “Agreed.”

“And when Sunday arrives, and you head back to D.C. we just let it end. A holiday fling.”

Again, Ren sensed hesitation in Maggie, but then she nodded. “Right. Sunday is where this story ends.”

The passion, and intense emotions between the two main characters (whether it be anger, jealousy or deep desire) hint at the possibility of a deeper love, denied.

They stood twined together, kissing for several seconds. Maybe minutes. She wasn’t sure; she was simply lost in Ren.

“Can you really do this?” he asked against her lips, his husky voice vibrating through her body. The sensation was just too good, too inviting. She couldn’t let this go.

Not yet. She wanted whatever time she could have with him, and she was willing to abide by his terms. After all, she hadn’t been lying when she’d told him that she didn’t think she would want to be in love with someone like him.

He was definitely fling material. He wasn’t love material. But that wasn’t going to stop her from going with this and enjoying every minute of it. Last night had shown her what sex could be like, and she felt like a kid with a new toy.

“Yes. I can do this. Can you?” she asked, even though she knew the answer.

To her surprise, Ren pulled away from her, staring into her eyes, his own eyes taking on that haunted quality.

“Yeah, I can.” His words sounded determined, as if he was trying to convince himself. Which made no sense to her, since he was the one who was unlikely to fall in love.

Least of all with her.

She caught herself. She wasn’t going to think like that. This wasn’t about being hard on herself. This was about enjoying her time with Ren.

Ren had many deep secrets that he knew would simply be too destructive to a serious relationship. Being a secret Vampire/Lampir, was the least of his problems. The fact that he believed he was cursed was damning him to a life of solitude. Would it be possible for them to beat the odds, with so much stacked against them?

My lips are sealed…

In essence, this book, and the passion described, was simply decadent. This was my weekend “chocolate fix”! The detailed imagery of New Orleans, (the sights, the smells, the sounds and the mystical nature of New Orleans) allowed me to experience it as if I were there. The narration of a new friendship blossoming into deep intimacy between two apprehensive lovers, was intoxicating. The only enemies present in this love story, were their own personal demons (and the looming “end of vacation” deadline), which permits the reader to revel in the liaison, uninterrupted by outside drama.

Ok, enough of the review, I have some reading to do (part two of this series, to be exact)…How excited am I!? Also will be heading out to buy the third installment in the trilogy (Demon Can’t Help It). 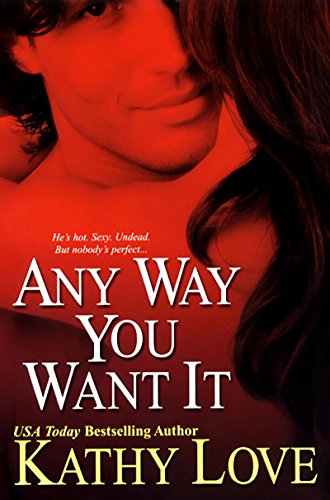