Backstage Pass: Sinners on Tour
You know, sometimes, I need a break. Not from reading per se, but from a genre. My “breaks” never last long, because I’m a total vampire-addict. There’s just something about a dark and brooding hunky predator with superhuman strength, magical powers, and a secret need to redeem his soul (and his heart) that just does it for me. Specially when a mere human just “does it” for him. Love those!

But every once in awhile, a book catches my attention and despite it not being anywhere near the paranormal genre, I just have to read it. And while this book blog is paranormal in genre, sometimes, I can’t stop thinking about a book, and I just need to tell you why. In this case my book enthusiasm involves two books that are purely, purely guilty pleasures for me. Because…what is almost as hot as a sexy, yet unattainable paranormal being? That’s right. A rock star. Oh come on! You know it’s true. Vampires, Rock Stars… what’s the difference? And when I saw the premise of this series, I knew I had to read them!

So far, two books have been published in the “Sinners On Tour” series (Backstage Pass & Rock Hard). Tee hee!! That second title has a double entendre. Get it? *giggle*

Surprisingly enough, book#2 was a whole lot tamer, however, in “that” aspect then this book. Either that, or this book dulled my sexual senses enough that book#2 wasn’t as shocking. No. I take it back. Book #1 (this one) was pretty hard-core. My eyes bugged out of my head quite a few times. I’d say that one was my book initiation into “smutty”.

Backstage Pass was offered as a freebie on Amazon (full length), and my curiosity got the best of me. Just how does a mere “normal” girl get a famous rockstar, anyway? And the lesson began.

Actually, in this instance “Myrna” (the regular girl) got off easy. Ummm… yeah. Double entendre there too. You see, Brian, the rockstar “guitar god”, falls in love easily. Groupies? What groupies? They eventually seem to end up being his one and only girlfriends. Myrna, a sex therapist, bumps into the band one evening after her convention (they happen to be staying at the same hotel).

The singer is hot, and completely interested in her…

This guy was trouble with a capital T.

and, well she’s a HUGE fan but she actually crushes most on their guitarist. Of all the luck! He’s there too!

Brian (drunk and moping) was nursing his heartache over his latest cheating groupie, I mean, girlfriend, and well, Myrna mothered him right into her bed (and his heart). And while the rest of the band warned her of his easy emotional attachment to his “girlfriends” – he’s a one woman guy (DON’T HURT HIM), she continues to insist that they are “just having fun” and that they both understand it’s nothing serious.

“I like you.” She paused. “I also like that you’re a rock star. I’m especially drawn to those magical fingers of yours.” She took his hand in hers and kissed his fingertips.

“But if I wasn’t famous, you wouldn’t have anything to do with me.”

But each intimate moment brings them closer together (and well, he’s not exactly shy about telling her how he feels on a regular basis). He’s open for love, and she’s intent on keeping him at a distance.

He wanted something real, not the fantasy. She could see it in his soft, brown eyes as he gazed at her. She was sorry to disappoint him, but she was all about that fantasy. He’d just have to find a way to cope when her few hours in fantasyland came to an end.

Thing is, no matter how far she pushes him, she keeps finding a way to get back into his life (because she misses him). And yes, she plays with his heart – BIG time! There’s no way you could convince anyone that the frequent, very intimate, personal and deeply connected moments they share don’t equal a “relationship”. But… she insists. Ugh!

“This thing between isn’t serious. We’re just having a good time.”

“Of course.” He slammed his fist into the dashboard.

Now tell me… how much do you love Brian? And how badly did you want to kick Myr? Grrrrrrr! I wanna admit something. I SO wanted him to grab himself a groupie for awhile and give her a time out. LOL! I know, that’s bad and mean of me to say, but… I couldn’t help it. hehe

Her fear of not deserving love (her ex was a nutcase), and his fear of her cheating on him (especially with Sed, his singer who is notorious for stealing his women – the jerk!) causes them both some serious turmoil.

Bad for them, but fun for me!

I’ll admit that some of the intimacy shocked me (consider yourself warned – I mean even my husbands eyes bugged out at a few scenes in particular – oh yessss. I was compelled to read them to him, just to get his reaction 😉 This was seriously HOT STUFF people!!) While I absolutely loved the book, it’s not perfect. The beginning of the book was a little “hokey” and some of the music/concert scenes felt slightly dated (I mean, for today’s standards – back to back guitarists?) Well, come to think if it, okay, maybe it’s happening again. The 80’s are back, afterall. Also, many times, despite the story’s insistence that Myrna was different because she was NOT a groupie, I still found myself thinking, “Ugh! What a groupie. She’s embarrassing herself!”

However, overall, the story was captivating and I could barely put it down. I LOVE these guys. The WHOLE group. How could such a smutty book make me love a story and the people in it that much? For me, it was well worth the read (whether it be free or full price). 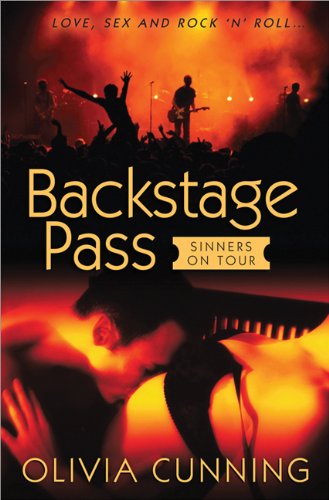 Yeah – I loved it. I’m going thru your Ultimate R&R list. I love this one so much I’ve read it 3 times so far. I used to “travel with the band” when I was in HS and college (so many years ago I don’t want to say) and am actually partially deaf from sitting with the Marshall stacks! I knew someone like Brian actually; he was a drummer and his name was Bryan *smirk*. Never famous, just fabulous. And my Sed counterpart – we still keep in touch. I could have really loved him, but fortunately it never progressed beyond a good friendship.

Ok Maryse I read these I just couldn’t help myself! I kept hearing about them. So I just had to buy them. I devoured them in 3 days. That means I read a book a day. I don’t know if you have read the 3rd one yet but I have. OMG!!!! This one is my favorite of them all. I loved Trey (be still my heart) Reagan (See made me laugh out loud and giggle threw the whole thing), and Ethan rounded them off nicely. This book was soooo HOT I swear I literally sat on the couch fanning myself while I read some of the scenes. I can’t wait til the next one comes out. Hot Ticket #4 will be bought and devoured as soon as I download it!!! Hot, hot, hot!!! I am usually a Paranormal Romance girl. They are my favs, but lately I can’t seem to put these down. I just got Devoured. Can’t wait to start it!!! I love your blog you give us some great books to look into and read! Thank You!

I was really disappointed in this book: Myrna just seemed like a ho from the get-go, and Brian seemed like a wuss since he fell in hopelessly in love with every woman that slept with him (hey where can I sign up?? LOL). The characters had zero-depth and some of the scenes made me cringe (um hello Trey & Brian?!?!?!). I’m a sucker for a rockstar story, but this just wasn’t it…don’t get me wrong, I read every word, but now that I’m done, I don’t think I’m gonna read any more of the series 🙁