Blink: A psychological thriller with a killer twist you’ll never forget
Killer twist, you say, huh? Oh yeah… those are magic words to me, ’cause I’m always in the mood to be on the edge of my seat, guess all sorts of things, think I might be right, only to have my jaw drop on the floor when the real reveal is let loose. And at this bargain price (at least when I got it), I one-clicked it SO hard.

Tanya: Blink is fantastic I recommend it…

Jean: I also loved Blink by K.L. Slater…..could not put it down! Had to remind myself to “blink” in the last 30% because I couldn’t take my eyes off the page! Lol

It certainly lead me on quite a tangled journey, from present to past, to present again, the whole way through. There are quite a few key characters that appear consistently from beginning to end (but it’s not hard to keep track of who they are, as they all have very specific personalities), and almost every single one was a suspect (in my mind, anyway). That said, their personalities were mostly acerbic, and suspicious, so it was easy for me to second guess the intentions of every single one of ’em.

Toni, grieving over her military husband’s recent death, overwrought with his medical bills, is forced to sell her home, and move near her mother’s home, into a low income housing area with her young 8 year old daughter, leaving their previously happy lives behind.

At thirty-five years old I needed to be able support myself and my daughter. I needed to find the person I used to be, the woman who had plans and goals, and who had built a successful career, juggling all the usual responsibilities – a husband, a home and a child.

Despite that, her daughter is quite well adjusted, but Toni’s recent pill-addiction is beginning to cause turmoil in their new lives together.

I was determined to manage without that little brown bottle full of calm, which I knew was a sure-fire road to ruin.

I had to make a stand against popping the pills right now. Otherwise, where would it stop?

Couple that with both having to adjust to a new job, and a new school, and a new community, and we’ve got a very mentally unstable foundation.

Her usually happy daughter is becoming more and more withdrawn and temperamental, and when strange things happen in their home, Toni wonders if her mind is playing tricks on her… or if someone else is. And in the process of their new lives together, her daughter goes missing.

They say, ‘Whatever happens, you must never lose hope.’

But it is too late for such cautionary words because hope has already gone. It has completely gone.

This truly feels like the worst time. But it soon becomes apparent that you are so, so wrong.

For one day very soon, you will wake up to the realisation that the horror has only just begun.

And anyone and everyone is a suspect. Why? ‘Cause so many of them were creepy, or volatile, or manipulative. Rude, or weird. Mostly all of it.

I was baffled by how the main character of this story (the mother who’s young daughter disappeared without a trace) continued to meet such confrontational and/or mentally unstable people. From her various neighbors,

‘My fault, sorry.’ The head and shoulders of a tall, skinny young man appeared over the hedge. He grinned, revealing blackened teeth. ‘She wanted to see the new puppy.’

The oldest trick in the book, which every parent in the country warned their kids against.

‘I’ll get you back for this,’ she muttered, too low for anyone else to hear. ‘I’ll f**king teach you not to mess with me.’

And then she was gone, leaving the glass door shuddering behind her.

to her daughter’s new teacher, everyone seemed incredibly shady. And that happens, I suppose. You have all kinds of people in the world. But for a seemingly friendly woman that tries not to step on any toes, still grieving the death of her military husband, raising a sweet daughter, I couldn’t understand how she was consistently treated with so much animosity (subtle and not-so-subtle threats) from complete strangers.

That said, a part of her journey was her struggle with prescription pills (so perhaps, through her altered mind state, her actions caused such reactions?)

So while this story is well written, I just found it a little too convenient in regards to the characters truly being so out of the ordinary. Perhaps a “tactic” by the author, to create so much havoc and strangeness amongst her characters, shining the light on them all, as “cagey”.

No matter. ‘Cause it DID keep me guessing, and at one point, I guessed right, but there was more to that reveal.

And there were TWO twists. BIG. HUGE. TWISTS. One was the obvious “this is the bad guy!!” twist that you knew was coming (but had no idea who it would be – or maybe you had an idea, like I did. And I was right!! But there was SO MUCH MORE to it than that, so in essence, I had no idea what was going on. LOL!!

But the “killer twist” (at least in my opinion) was a very clever character reveal that had me completely floored. I was so sure I knew what was going on, and wasn’t even looking for much more on “that” (I was assuming… stuff). The author played the whole “look over here” magic trick on me (that blurb certainly helped steer my “assumptions“), and BAM! WHAT?!!! NO. WAY. YAY!!! I love when that happens!

Overall, I enjoyed it. And while I did find some things that gave the story momentum… a little over-the-top, I went with it all, for the most part.

But, it’s the final main reveal that was so over-the-top crazy for me that it almost became… lackluster. Isn’t that weird when that happens? When it’s so outrageous, that you’re all… so…. WHAT???? No. COME ON. No. REALLY? NO. And it’s the ending that kind of broke the whole reveal-thrill, for me. Some might love it though.

That said, I will admit, I didn’t see it coming at all. TWO BIG twists (along with a few mini twists all the way through, that had interesting reveals too), but the two big ones? I certainly didn’t see them coming.

3.5 stars <— 4 easy stars the whole way through for the most part (it’s an easy “guilty-pleasure” read, that’s right up my alley), but that ending just didn’t do it for me. 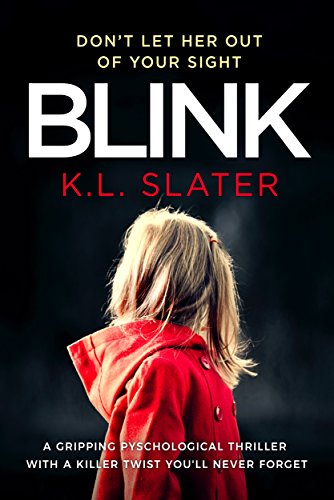 Sorry you didn’t like it more Maryse! I get where you’re coming from with the ending though. Just having all those suspects made it good for me, but yeah, why was she surrounded by all those creepers?

I figured it was **** and that *spoiler*. The *spoiler* *spoiler*? Really?! It seemed like a convoluted ending to me.

I have never done this before, and I have read ALOT of books. I loved this book. Especially the ending. I did NOT see that coming! I will definitely be reading more of K.L. Slater’s books!! I love that the book I just finished, Blink, has Safe With Me in the same book. On to next book. Thank you!!

YAY Bekki!!!! 😀 I’m thrilled you LOVED it (and that you came back to let us know)!!! I haven’t read Safe With Me yet so let us know what you think of it.

Best book I’ve read in a long time! I COULD NOT stop reading it! Loved the twists and turns! I will definitely read more of this author’s books!