Creep (Creep series Book 1)
Y’all know I have a slight *ahem* (extreme) penchant for disturbing books and since my craving for an exciting psych-thriller read wasn’t exactly met with that last one, I had to give it another go. So where did I pick from? In my Ultimate List of Book Lists!

Yep! I was updating the List of Gasp-Worthy Plot Twists & Crazy Endings with some new suggestions, and I saw that cover sitting there from my first round of recommendations, and I was all….. oooooooooooh that looks CREEPY. How could I possibly resist a book title and book cover like THAT?? PERFECT for my mood. It was a recommendation from a fellow reader and when I clicked and saw that super-bargain price, I made it my next!!

And boy was it good! Now, I’m not saying it’s my favorite in this genre (I’m giving it a solid 4 stars), but it sure had a bit of that “You” by Caroline Kepnes) feel, and satisfied most (if not all) of my psycho-character cravings.

Maryse:  I’m reading “Creep” because my psych-thriller need was still in full effect after the last one didn’t deliver. Then… onto a love story!

Amy: Maryse…is it Creep by Jennifer Hillier? I read that one not long ago when I found it on my Nook, which I had to read from ’cause I let my iPad drain down to zero. *snort* I thought it was pretty good, not as suspenseful for me because of the multi-POV but it still had an edge to it. Also, there was a random comment made at one point which gave something away way too easily for my taste, but then again I have a really bad habit of trying to figure things out instead of just living in the moment of the story, ya know?

Tessa: “I have a really bad habit of trying to figure things out instead of just living in the moment of the story” I thought everyone did that. Crap, does that make me odd again?

Maryse: Yes it’s that one. I’m finishing it up. I liked it… but it didn’t blow me away like some do… And yet it has so many of the elements I enjoy in reads like this, so I have no idea what it is that is keeping me at a 4 star level with this one…

Amy: Maryse…my issue with Creep was that I needed more from it. I wanted my heart to race and my tummy to twist, and that just didn’t happen. Ooh, that bathroom scene though…I wanted to smack his stupid a$$. Idiot. Grrrr…

AGREED!!! Amy you ‘n me, book-soulmates for sure! We need the same freak-outs. LOL!!! And Tessa, nope… I totally do that too. Not with all books… I have to remind myself to just go with it, ya know? And if the writing and story is really good, I totally can.

And this one? It was plenty good. So many lies and deception that lead into absolute danger. ‘Cause you see, she’s a well respected psychology Professor, having an affair with her young yet gorgeous teacher’s assistant, and when she finally tries to call it off, because she just got engaged to her very rich boyfriend, well… let’s just say her student-affair goes awry!

She had no idea how he was going react to her news. She’d known him long enough to understand his propensity for structure, and she was about to upset the routine they’d established over the past three months.

Yikes!! Yeahhhhhh… about that. It didn’t go well at all. At first he’s pissed, but gets cocky and threatens to ruin her with a video he took of them in action (on his phone)…

Having an affair with a student was one thing. It happened all the time— she could think of three professors who’d been involved with students in the past, who’d gotten nothing more than slaps on the wrist. And Ethan was twenty-three and neither of them were married, which counted for something.

But a video? It wouldn’t matter whom she was screwing— a video of her writhing naked on the Internet would get her fired. No hearing, no chance to defend herself, just an hour to collect her personal belongings and she’d be out the door on her ass. Do not pass Go, do not collect two hundred.

How could I have been so f**king stupid?

…but eventually, even that much control over her is not enough.

She’d be damned if she was going to lose her job, her reputation, and her fiancé because of a stupid mistake with a self-centered, arrogant grad student.

Yeah… there’s more too him, than that, though.

So I got a bit of everything with this one. Her own personal turmoil, fear of humiliation, losing her livelihood, the guilt and potential eventual admission of her misdeed turned into her own private hell to her fiancé (whom she loves dearly).

Sheila’s knight in shining armor might be six foot four and 240 pounds with bad knees, but he was all hers.

And to think she’d almost thrown it all away.

But it gets even crazier as the thrill-factor escalates in the form of creepy-stalkerish behavior. And worse. A cautionary tale, indeed.

Why didn’t I think it was perfect? Well… at times it was somewhat far-fetched. I mean I “went with it” ’cause I’ve seen stuff like this in crazy movies, so why not, right? LOL!! So that, and… I suppose I mostly love all of the crazy from the main character’s perspective (or that of the bad guy’s POV). A mix of both is fine, but of course, as in most psych-thrillers, there is the prerequisite mystery solving. You know… police and private investigators, and such. Which this one had. Detective work (which was cool too). It certainly worked in this case, and did not overwhelm or take too much away from the creepy-parts. And it certainly appeases that need for those that love the mystery cop stories too.

But for me, there was no mystery since I knew what was happening. Or did I? *smirk* 😉

Tee hee!!! Yes… there was a twist, just as that list promises, and so it was well worth the read, and much creepy-fun. But it could have been funner, ’cause I just prefer it all from the creep-side. LOL!!!!

P.S. And yes… there’s a second book (Freak (Creep series Book 2)) which is also delightfully bargain priced right now, and I’m trying to decide if I want to jump in it right away, or head to an angsty love story instead. 😉

Gah I can’t get enough of scary characters!!! I blame Dean Koontz, and Tarryn Fisher. And all of our beloved dark-read authors. *snort* 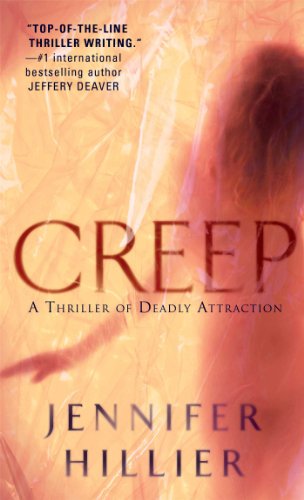 Book-soulmates…I love it!! 😀 Freak-outs over books are the BEST.

I felt so bad for her fiance. What an amazing man though! And despite her actions, I felt for her as well because she had her own issues she was working through prior to all of this. It may not have been as intense as I would have liked, but it was good and lived up to its name…guy was a CREEP!

That cover… *shudder* You know why. 😉