X
You are here: Home / My Book Reviews / Book Review – Daisy Jones & The Six: A Novel by Taylor Jenkins Reid 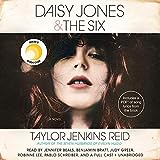 Okay so I say book review, but this is actually my very first fictional audiobook that I’ve listened to in its entirety (and on top of that – lucky me – ’cause she’s one of my favorite authors ever). This one came HIGHLY recommended, and I knew I was in for some serious drama so I one-clicked it with glee!!!

Robin: This was also a great book on audible. Probably the best I’ve listened to. The narrators (there are a few) did an exceptional job.

Michele G: Yay, you finally got the Daisy Jones audio! You’ll love it! Even though I loved both the book and the audio…it really does lend itself to an audio format so easily…. can I just say that this audiobook is on a whole different level — it is unbelievably amazing!

Michele G: I LOVED it! It really struck a chord with me (see what I did there…music pun lol). I mean it is different from her earlier books (which will always be my faves) but I knew that going in and I enjoyed it for the artistic book it was. Anyway, even though I read it, I am on the wait list for the audio with my library because I think it will be a phenomenal audiobook!

Steph N: I read Daisy Jones and the Six this past week and had to wait for them to buy that one. It was worth the few week wait. 5 star read for me! It was written so differently, like an interview. I first started reading it and I saw that and I was like, ut oh but was pretty quicky drawn into the story.

Lisa: …anyone on the fence about Daisy Jones, I highly recommend it. I loved the style it was written in – and I’m not much of a rock star storyline reader, but found myself engrossed.

Steph N: I almost didn’t read Daisy when I saw/read that it was written in interview style. But who am I kidding. All of her books that I’ve read have been excellent.

Kim: I read Daisy the minute it released because it was highly recommended by someone that got an early copy. I got sucked in right away and was intrigued by the unique format … Another friend listened on audible and said that version was amazing so that could be an option. Regardless, it will be adapted as an Amazon series so you can always just wait and watch that! …🤣 Daisy is super unique and I think that’s why it really struck a chord with me!

Maryse: I have just started Daisy and the Six in audiobook format and everyone is right!!! IT IS FANTASTIC. And considering I LOVE rock star biographies, this reads (or I should say “listens”) just like one. Totally up my alley, even if I had purchased it as a book.

Leslie M: Maryse, I am so excited you are into audio now. Isn’t it the best??

Maryse: YESSSS!! I think Daisy was the way to go to initiate me. I’m hooked on it and I’ve got 4 hours left with no sign of stopping.

KM: Oooh! I wonder if any others will compare seeing as you started with the one of the best 🤣

Denise: It’s brilliant. I listened to the audiobook first, then bought and read the ebook. I’ve just come back from my local supermarket when I just bought the paperback. 😍😍

I absolutely love rock band biographies (and am always in shock at how they lived through their hard-partying/downward spirals) and while this one was fictional, it was just as fun ’cause I couldn’t help but guess at the true rock band similarities that might have inspired the author on this one! In fact, I polled Facebook about it and received a bit of insight about the writer’s inspiration!! 😀

Maryse: I’m wondering who the inspiration was for Daisy. I think I read Stevie Nicks?

Tasara: I love this book so much and the audible is AMAZING. A few of us got to have lunch with Taylor a while back and she said she lived and breathed Fleetwood Mac for months as “research”.

Maryse: Thank you!! I love the tidbits behind a book. 😀

Maryse: Oh wow I just read her Instagram post and that’s an incredible story!!! Thank you!! This is GREAT!!! I love the real-life tidbits behind books and a writer’s process and inspiration!!!

Jovana: The audio version is one of my top faves. The actors are brilliant. Really felt like a Behind the Music episode. I didn’t want it to end. ♥️

Unfortunately there won’t be any quotes from the book that I’ve highlighted since that’s the only main drawback of listening to a book instead of reading it, but be that as it may, this one was full-on entertaining and angsty and tumultuous and everything you can imagine with an up and coming group that hits it BIG!

If you’re new to audiobooks, this is THE ONE to start with. Multiple narrators all play a part of a different band member, and you get to know them by voice (and even imagine what they look like) as if you’re actually watching a movie. And what a movie… er… I mean book, it was!

The Six is an already well established band playing bars and shows with a pretty decent following. And then they meet Daisy Jones. The whole beginning of this book is pretty much all about Daisy, and her free-spirited heart from a very young age, and how she pretty much broke all the rules. Young and beautiful, born to famous parents (an artist and a supermodel) she already had that “IT” factor. Even as a teen, she got her way, and pretty much anything she wanted (backstage and becoming a little famous too), and even discovering a singing talent and artistic power of her own. Her beauty and complete independence saw her pretty much… winning at every turn.

There was nothing usual about her. She was remarkable. Oh sure, there were disappointments of course. Nobody’s that perfect. Somebody is still bound to let you down (her parents for example). Bad choices, fueled by inexperience, drugs and alcohol led her to certain predators. Rock stars that used her and left her feeling worthless. Music industry executives that saw dollar signs when they looked at her. And OH YES, they wanted her… but only as THEY saw her. A beautiful, commercially marketable, money-making potential. But not her art.

But let-downs and worldly realizations did not keep her down. She was once a groupie of sorts, and now she had a following of her own (partying with the rich and famous and showing up in magazines and then the covers…). She was a force in her own right. And then she meets “The Six”. And it all goes crazy from there. Tensions run high between she and the main singer Billy. He’s already deeply in love with his wife and totally committed but Daisy keeps throwing monkey wrenches into his stability. Running hot and cold, these two battle it out, both in their artistic creativity, their need for power and control… and of course the undeniable attraction despite both feeling certain levels of hate for each other.

But you know as they say, there’s a thin line between love and hate. And it’s that thin line that, between the two of them, have them creating some of the biggest hit songs of all time. That undeniable electricity (both drawing them together, and simultaneously repelling them apart), the world sees it. And the world LOVES it.

I WAS DYING to hear these songs, my friends. I absolutely LOVE Fleetwood Mac, and the original song lyrics in this book (reminiscent of the Fleetwood Mac dynamic – if you know their songs and their true history, you’ll get what I’m saying) had me hooked. I couldn’t ever hear the songs, but in a way… I could. And I get it.

And I’m ending it there. 😉 You’ll see where this goes. Each member of the band (and their crew) have their own recollections and memories. Some match up. Some are completely opposite. Everyone felt the tension, and Daisy and Billy weren’t the only two strong personalities to content with.

And then there’s quite a clever twist at the very end. I gasped! And I LOVED it. And while I loved this story, the very last couple of lines made it whole, to me. Turned an interesting, tumultuous rock star story story into a heartfelt one. Loved it!

Maryse: Finished my Daisy Jones audiobook and that last line makes me feel like crying. There is no way I can listen to that song just yet…

But I will. I’ve been dying to hear them. 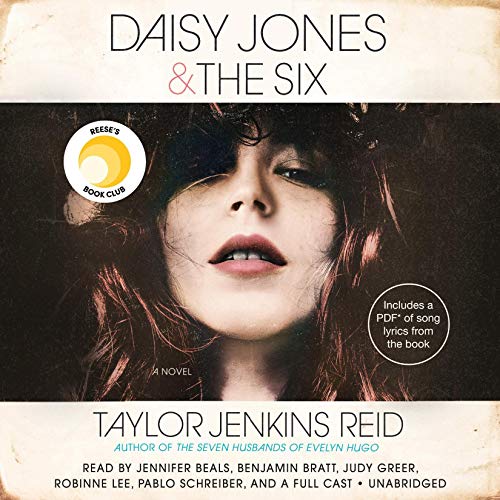 SQUUUEEEEEEE!!!! I am reading Daisy Jones right now! After reading your review about the clever twist at the end, I’m silly-excited to finish it 🙂

How far into it are you? It’s a ton of emotional drama!!!

I adore Stevie Nicks, so a good rock and roll story that has the same “feeling” as all that Fleetwood Mac drama might be worth a look.

Definitely!!! It had me researching more about Fleetwood Mac’s tumultuous private life. 😉 I should buy Stevie Nick’s autobiography.

My (adult) son read this on a recent rec and somewhat to his surprise he loved it. I haven’t read any TJR as yet, but I think I’d better get on that bandwagon. Ha ha ha. That pun was accidental – seriously.

Jan she’s amazing. I have a feeling you’d love her. Amazing writing, and she has a very unique voice. LOVE HER!

I just started Daisy Jones and am loving the interview style format. I’m only 30 pages in and I feel so sad about the loneliness Daisy felt.

Latest Romance Book Releases – 10-04-2022 October 4, 2022 By Maryse Leave a Comment HAPPY TUESDAY NEW RELEASE DAY!! I LOVE OCTOBER!!! This is also my favorite month because all of my favorite people are Libras (my mom, my sister, my best friend, and now even my boyfriend) so I have an active birth...
View Comments

I posted it in the comments (if you can't see it, change the option to "all comments" or "newest" instead of "most relevant"): ... See MoreSee Less

Book Review – Heart Bones by Colleen Hoover September 4, 2020 By Maryse 2 Comments Heart Bones <— Such a strange, curious title and yet so perfect, and so perfectly revealed in this story. It made ALL of the sense in the world when it reached out to me, giving me such a bittersweet tug to my own...
View Comments

SOLVED!! ---> The book about the Hero that was just released from prison and moves across the hall from the heroine…

I posted it in the comments (if you can't see it, change the option to "all comments" or "newest" instead of "most relevant"): ... See MoreSee Less

Comments have been wonky, so I'm going to post it in a comment or two from here. 😉

MONDAY EARLY BIRD BOOK RELEASES + 1 that is coming this month that is making me squeeee already!!