Mikhail’s eyes darkened, burned. “You do not understand. You are my life. My heart. There is no Mikhail without Raven.”

Dark Prince: Author’s Cut Special Edition (Dark Series)
This book was a good start to what appears to be a popular series.  This series is deeply romantic,  almost to an obsessive level. I’ll admit, it is hard to read each novel all in one sitting (they are so intensely passionate, that I needed to trudge back to reality every once in a while for a breather). These “breaks” were short lived, however, as I found myself quickly craving more of the current book, and escaping back into the Carpathian way of life. While reading this series, you will find yourself quite disturbed at first, at the Carpathian male’s demeanor towards “HIS” female, but as his emotions start taking shape, so does his softer side.

I’ve only read the first three books so far, and while the second is my favorite, it was also the hardest to read. This first book, actually had a gentler male character, despite setting the scene for equally arrogant male characters to come.

It is about a human female (Raven) with strong telepathic abilities taking a much needed break from helping the FBI track down serial killers. She has lived a solitary life due to the emotional turmoil she feels from the thoughts of those around her, and even avoids any actual human contact (as their touch often brings on intense pain).

Her vacation in the Carpathian Mountains takes on a sudden twist, when she “telepathically” hears the anguished cries of loneliness being broadcast by a male resident in the area. Compassionately, she reaches out to him, and gives him enough hope so as to convince him that life may still be worth living.

Mikhail finds himself intrigued with this gentle soul, and knows she is the light to his darkness. After a few days of telepathically communicating together, he decides he must have her – she is his.

While mentally connected to her:

Tell me your name. It was a command, and Raven felt compelled to obey it.

She forced her mind to go blank, to be a slate wiped clean. It hurt, sent darts of pain through her head, made her stomach clench. He was not going to take what she would have given freely.

Why do you fight me when you know I am the stronger?? You hurt yourself, wear yourself out, and in the end I will win anyway. I feel the toll that this way of communicating  takes on you. And I am capable of commanding your obedience on a much different level.

Why do you force what I would have given, had you simply asked?

She could feel his puzzlement. I am sorry little one. I am used to getting my way with the least amount of effort.

He eventually locates her, and to her dismay (despite finding herself deeply drawn to him), takes her. Literally. He comes to her hotel, scoops her up, and takes her away to his home, without even asking ( see …I told you there would be some issues….)

She soon discovers the true nature of this Carpathian. He is not just another telepath, as she had originally suspected, but an important male, leader of his people, an exquisitely handsome Prince. Despite his power and outwardly aggressive demeanor, he is generous and loving, but not at all human.

His commanding nature is eventually understood, as a result of his obligation to protecting his species. His people are being hunted by vampires and vampire hunters, alike. His race, diminished by murderers, and the lack of Carpathian females being born, forces him to control all aspects of their way of life. The men of his species are lacking female lifemates (the light to their potential darkness). Each century that the males live without love, forces them closer to an emotionless existence, and, they struggle against their inevitable “turn” into becoming a vampire (soulless bloodsuckers with no remorse for the killing of humans – women and children alike).

“The price of these gifts is high, little one. We are cursed for the need of one mate, a sharing of souls. Once this occurs-and the ritual can be brutal to an innocent woman-we cannot live apart from our mates. Our children are few; we lose many in the first year and most of these are born male. We are blessed and cursed with longevity. For those of us who are happy, a long life is a blessing; for someone alone and tormented, it is a curse. It is one long eternity of darkness, a barren, stark existence.”

While, my logical side found itself frequently appalled by the excessive arrogance and archaic ideologies of the “male hero” portrayed, his protective, passionate side, and vulnerability kept bringing me back in, full force.

“Is it that you want to run from me? Am I really so terrible? I would never allow any living creature, man or beast, to harm you, not if it was in my power to prevent it. I thought our hearts and mind were in the same place. Am I wrong? Is it that you no longer want me?”

There are SO many parts of this book that I “earmarked” to possibly quote, here. It is rich with intimacy, and frequently touching, and emotionally raw. I found if I simply let go of my natural instinct to rebel against such controlling mannerisms, that I could actually let myself be carried away with the ebb and flow of the unraveling love story.

The fun, in these books, is the journey we are taken on, while the leading male learns to adjust to a new role, and the heroine is “wooed off her feet”. The battles they face together, whether it be a battle of wits, or a battle against truly dangerous enemies (which are frequent occurrences in this series), will keep your adrenaline pumping.

One of my favorite parts of the book occurs in Chapter 7. Mikhail’s entourage, (strong warriors of his species), are highly amused at how Raven obviously has him twined around her little finger. We learn of the respect and love they all have for one another. It is also, to me, one of the more emotional, sad chapters, that hooked me deeply, into their story.

He caught her hand.  “Put my ring back on your finger.” His thumb caressed the inside of her wrist. “I want you to wear it. It is important to me.”

While in real life, I would hope that one would never allow themselves to succumb to such a controlling personality, it is important to remember that this is a work of fiction, and this beautiful fictional man, with all his faults, has MANY more redeeming qualities that permits us to indulge, even if just a little bit,  in the fantasy of the tale. 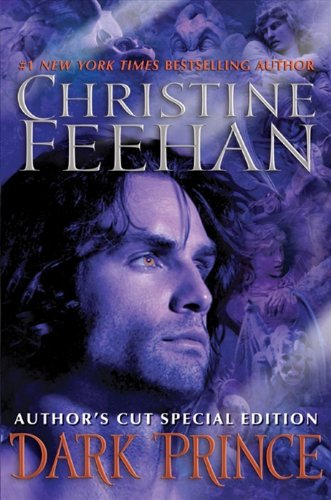 OMG! I loooove this book already. I just read your review on this yesterday and was convinced to buy it on the bookstore near our home. I was afraid that I won’t find it because sometimes it is difficult to see books of Christine Feehan here in the Philippines. But to my luck I was able to find one. Too bad they don’t allow us to bring books inside the office (Paperless working environment 🙁 ) Dark Prince is very enticing to read. I’m still in chapter 2. And I can’t wait to go on break to read again…

So how far are you into the book? What do you think so far? He’s so domineering, right? hahahaha But for some reason I loved him in it. Book #2 (the next one) is my favorite so far in the series).

You bet! I just read half of the book but I’m already recommending it to my friends to read, which I don’t usually do because they depend on my assessment in books if it is worth buying or not. That was of course a couple of years ago and we are like anti-ebooks back then because we think its still best to have a hard copy and not to rely on technology so much.(yah we are a group of grannies come together on that thought.) Going back, when I read about the Carpathian race it instantly established a kingdom on my own fantasy world. I looked forward for more books for the series and I wasn’t disappointed, as of today, 21 books in total I think? Dark Series has come a long way.

Well, at the some parts are a bit too fast for me. I don’t know maybe that is just because this is my first book on the series and I have no idea about their background (besides from your review). All I know is that the males are all powerful but needs to find their mates or else they will die from their loss. It was a funny thing because at least those macho males have vulnerability. As Marilyn Monroe said:

I don’t mind living in a man’s world as long as I can be a woman in it.

And let me add, in the case of Carpathians, be their source of strength. Bwahhaha girl power!

The whole arrogant-macho chuchu thing is slightly irritating. It was too much for me. I should have fallen in love with Ravens character but because his soooo bossy and sometimes disregards Mikhail’s feelings I was a bit off with him *I’m having a don’t want to have a man that doesn’t treat me like a princes attitude*

But of course there is a soft side in every one. This is one of the highlight quotes for me:

“I claim you as my life mate. I belong to you. I offer my life for you. I give to you my protection, my allegiance, my heart, my soul, and my body. I take into my keeping the same that is yours. Your life, happiness, and welfare will be cherished and placed above my own for all time. You are my life mate, bound to me for all eternity and always in my care.”

Oh I wish my man will say something like that to me.

I have all of the books in this series. They are hard to find. But I had to have them all. After reading 5 or so, I stared skimming through the love scenes. The back store is so good! I counted 25 book In my collection, I may have loaned a few out though.