Dark Side of the Moon
This was a book I was anxious to read simply due to the dark, mysterious and unbelievably sexy model on the cover. He must have mesmerized me so much, because I accidentally purchased the book twice! In this case I DID judge a book by it’s cover, and it didn’t disappoint.

This book takes place in Seattle, and is about a male Were-Hunter/Leopard named Ravyn who is also a Dark-Hunter (the best of both worlds – although I’m sure he begs to differ). His family want nothing to do with him, specifically because they blame him for the death of their loved ones, and even more so, now that he is a Dark-Hunter (instead of just dead).

One evening, while patrolling for Daimons, he is tricked (his libido getting the best of him), kidnapped…

One minute he’d been hiding in the shadows of Pike’s Market, waiting for his Squire, Erika, to come get him, and the next thing he’d known that puta in the red skirt had grabbed him and snapped the collar around his neck before he could fight or sense her intentions. Once the collar was in place, he’d been powerless without his magick.

and brought to an animal shelter (operated by Daimons). In cat form, he is imprisoned in a cage, sporting a “special” collar that will not allow him to change back to his human form, while he awaits his death.

He becomes unintentionally involved with “Susan Michaels” when she “adopts” him. She is an ex-reporter, now working for a trashy publication (due to a past reporting error that has blacklisted her from working for anything respectable). She receives a call from her best friend (Angie) who works at an animal shelter requesting she come see her immediately as she has a tip on a very important story. So they are not suspected of anything out of the ordinary, her friend hands her any old cat (in this case, Ravyn) and insists she act as if she is there to adopt the animal. Privately, her friends (Angie, and her husband Jimmy, a police officer) let her in on a story that seems absolutely preposterous, and she now fears for their sanity.

Susan sighed at the fear in her friend’s voice. “Did he tell you what was going on?”

She shook her head. “Not exactly. He said too many people were missing and dying and that he’s terrified that the ones responsible will come after him next. He wants us to head out for his parents’ house in Oregon.”

“Did he also tell you about the vampires?”

“The what?” By Angie’s face, Susan could tell that Jimmy hadn’t shared that bit of information with his wife.

“Yeah, according to him, the vampires are out to kill all of us off. No offense, Ang. I think Jimmy needs some help. Has he been doing a lot of overtime?”

Anger flared deep in Angie’s eyes. “Jimmy’s not crazy, Sue. Not by a long shot.”

Maybe, but she didn’t want to argue with her friend. “Yeah, well, thanks for the hot news tip.”

As she started for the door, Angie stopped her, “Here. Take the cat with you.”

“Please. For whatever reason, Jimmy is terrified. Take the cat to keep up appearances and I’ll come by and pick him up after work.”

Shortly thereafter, unbeknownst to Susan, the clinic is attacked, and her friends (amongst others) are killed. Arriving home, under the illusion that she is safe (and thinking nothing of what Jimmy has told her), she attempts to remove the cat’s collar…

At first the collar seemed to tighten even more, causing the cat to wheeze and choke. Susan pulled at the collar with all her strength. Just when she was sure it was useless, the collar snapped in half with a foreign surge of electricity so powerful it actually knocked her back three feet.

Cursing, she righted herself, then froze as she caught sight of the cat, which was growing on the carpet, right before her eyes. In a matter of heartbeats, it went from small house cat to full leopard size.

And still it writhed on the floor as if it were agony.

She flinched at the man’s voice in her head. Far from a coward, she moved forward…at least until all hell broke loose. Lightning shot from the ceiling and rebounded all over her room, shattering frames and breaking light bulbs. The hair on her body stood up on ends as the air was rife with static electricity that snapped in her ears.

The leopard let out a feral snarl as it clawed her carpet.

Unsure of what to do and unable to get to her gun since the cat was between her and the staircase, Susan took cover behind her couch as more lighting flashed and the windows rattled so badly that she wasn’t even sure why they hadn’t shattered. She shrieked as a bolt came dangerously close to her, making her hair stand on end in what she was sure was a truly attractive sight.

Just as she thought her house would ignite into flames from the powerful bursts, the lightning stopped abruptly. It was eerily quiet as she sat cringing with her hands on her ears. So quiet that all she could hear was the pounding of her own heart. The heaviness of her own breathing.

She half-expected the lightning to return.

But after a minute of waiting with nothing else running amok, she dared a glance over the back of the couch to discover the most incredible thing of all had happened…

Her leopard was gone and in its place was a naked man.

…and her whole world (and belief system) is turned upside down.

The Daimons, realizing their prisoner is missing, track down Susan’s residence and attack them (forcing Susan to see Ravyn in true Dark-Hunter action). The police become involved and the news report that Susan and Ravyn are responsible for the deaths at the clinic. They now become wanted fugitives.

“Oh, I don’t know,” she said as she sat down. The leather creaked under her weight, which really just made her feel so much better about herself and her situation. “I just woke up this morning, had my cornflakes and coffee as usual. Went to work for my sleazeball paper and saw my prize story had been butchered and turned to crap. Had my boss crawl all over my butt because I can’t leave reality behind me. So to help me with that, he gives me this assignment to track down some kid writing about a catman who prowls the market. Then while I’m contemplating the total absurdity that is my life, my best friend calls and tells me she has a lead for a real story that could get my reputation back. Only that story turns out to be one about the cops helping vampires eat us. I adopt a cat that I’m allergic to because my girlfriend is paranoid. I take him home to have him become the very thing I’d been told to find by my eccentric boss. And the next thing I know, my house is blown to shit. The Catman eats a guy in front of me, and my two best friends on the planet are now dead.

I enjoyed this book because it introduced us to even more characters, with deep emotional ties that make this tale tangible. There are some incredibly funny moments (when Ravyn first assumes Susan is a Squire, and my favorite part, when Ravyn was “tranqued” and loopy), and some very touching moments when Susan and Ravyn connect.

He dipped his head down so that he could inhale the scent of her hair. The soft strands tickled his cheek even as the warmth of her body calmed him. He laid his other arm over her and held her close in the darkness. Like a lover. This moment awoke a long forgotten dream inside him. A dream of family. Of love. Of having someone he could love, who would love him too.

God, it’d been way too long since he’d just held someone…

“Yeah, and two years ago I thought Ash was a friend of mine. You know what that got me? A bullet in the brain.”

“I don’t know how you died, but I know Ash didn’t kill you.”

Nick gave a bitter laugh. “I wish I still had your blind faith. Unfortunately, mine was stripped from me the night I died.”

… and the first meeting (or should I say confrontation) between Nick and Ash (this one hit a nerve!)

Well worth the read, and definitely in the true spirit of the Dark-Hunter series. 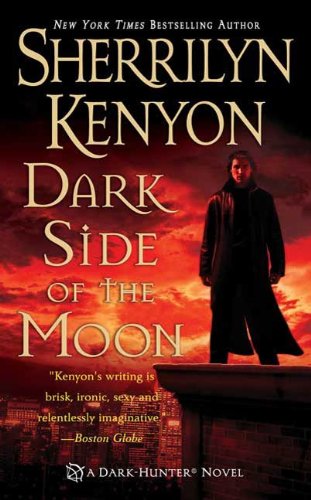 Although I‘ve already read Vane, Fang and Fury’s books, and developed high respect with Were Hunter’s traditions and culture, I’ve always skipped Dark side of the moon. Maybe because of my first impression with Susan as a report and I thought the story will be like,she is going to expose the Dark Hunter world and Ravyn needs to stop him and they end up falling in love with each other. It was a nice twist that Kenyon used Susan’s background to HELP them save lives of Dark Hunters themselves.
It also took my breath with the confrontation of Ash and Nick. It is cool that Acheron freezes everyone! 🙂
But I hate that Satara is always secretly goofing around them. I really hate her powers! And the effects on it with Nick that’s gonna change him for the worst. 🙁

Actually, initially I was forced to read Dark side of the moon. Coz I am sooo funed with taking Dark Hunter quizzes in facebook and other sites. You will get 5 points deduction if you got the answer wrong. And I always fail with Dark side of the moon questions. Especially with characters like Cael and other new characters that’s introduce in the book. But reading it I think was worth the effort!
Even though I still don’t know the connection why Ravyn is somewhat similar to nick that qualifies him to train him (if someone knows please enlighten me).
My favorite portion was when Savitar kicks Satara’s Ass. No one messes up Were Hunters aside from savitar. 🙂