Darkness Revealed (Guardians of Eternity Book 4)
Here is another vampire book that just didn’t thrill me. I’ve hit two in a row, and I can’t wait to get excited and swoon over a vampire again. I miss the vampires that took MY breath away. I mean…literally just made me gasp, because of what they said, something they did, a heartbreaking moment that was so perfectly detailed that I couldn’t help but feel it.

It appeared as if all of the elements were there. There was danger, a past “hurt” to overcome, a future to decide upon (that could ruin everything, love-wise), a reluctant heroine, and an immediately in-love alpha-hero vampire. I guess he said all the right things, because the author told me, in so many words, that the heroine was swept away, but I just… wasn’t. There was something missing.

So much so that I felt the need to voice my frustration on my Facebook page:

“I have no idea why I’m struggling with him. His intense need to protect and love on Anna is driving me crazy. Smothering her nonstop… just too much. I’m 1/4 of the way in though so hopefully I’ll find him as suave as the author is making him out to be.”

Once upon a time, a few hundred years ago, something happened. A human female (“lowly” in status), followed a mysterious handsome man into a dark room (she thought he was going to meet up with her beautiful cousin who was always up to no good). Realizing she was alone with him, he pinned her against a wall, seduced her (completely) and proceeded to drink her blood.

“I do not think you will scream, querida.” With a smooth motion he lifted her off her feet and wrapped her legs around his waist. His dark eyes smoldered with a wicked amusement. “Not unless it happens to be in pleasure.”

He stilled, one hand lifting to cup her face. “You are mine Anna Randal. From this night forward you will belong to me.”

And then, after… he disappeared. Seemingly for good. The jerk!

She deduced from his blood drinking that he was a vampire, and then after a couple of centuries had passed, deduces that she must be a vampire too, cause she’s still alive and kicking, and looks no different than that fateful night. Thing is, she has no urge to drink blood, and hasn’t grown fangs. What’s up with that?

Then… 200 years later, there he is. THAT MAN! Attending some social event. She stalks him from afar, while being shadowed by her own arch-nemesis (a beautiful colleague that drives her crazy with her arrogance). He approaches her, and literally kidnaps her to safety when that very arch-nemesis attempts to magically take her away.

And that’s when the real story starts. She finds out that he didn’t leave her because he was playin’ her, but out of a serious (but secret) obligation.

Damn the Oracles. They had called him away just when this vulnerable woman had needed him most.

He’s been following her since that night, protecting her from afar, as is now his duty. What she doesn’t know (and he can never tell her, until it is time) is that the Oracles (basically the law for all paranormals) have plans for her.

The Oracles were rarely forthcoming, and while they had revealed that this woman was born to join their ranks, they had yet to explain exactly what she was.

She couldn’t be human. Her immortality proved that. And he could detect no demon blood running through her veins. Added to the fact that she didn’t seem to have a clue about her powers, it left nothing but a gaping question.

A question he intended to find the answer to before she was taken by Commission.

He has been issued the absolute responsibility to protect her (without intimacy this time!), until they are ready for her. Unbeknownst to her, her powers are “incubating” and soon enough she will prove to be an important player in the paranormal world.

She may not be a vampire, but she’s something… something BIG! A bloodline that promises her much power, but that places her in absolute danger as someone out there has a serious grudge.

“Blood of the ancients.” Styx furrowed his brows, his gaze shifting toward his vast collection of books. “I thought Morgana to be the last of the line.”

Cezar shrugged. “So did I.”

“You think it’s true that they are related?”

“They must be in some way.”

“And now she is destined to be an Oracle.” Styx returned his attention to Cezar, his dark gaze smoldering with his lethal power. “Intriguing.”

I’ll let you find out exactly who, what, when and where if you feel so inclined 😉

But the angst, and tension I was hoping to feel (when it came to Cezar) started off as annoyance, instead. However, I will concede to the fact that there were some chuckle-worthy moments, that incited me to Facebook this comment:

Ok I’m starting to enjoy Alexandra Ivy’s “Darkness Revealed” – Favorite part so far… when Cezar asked Anna if he could feed from her and she said NO. So he said, “Fine, I’ll find someone else to feed me” and then she turpedo’d him into a wall and called him an ass!! LOL!!!!! Awww they’re growing on me.

and it did get significantly better towards the middle/end. It’s just that, the slow beginning and the occasionally irritating Cezar, sort of ruined “the moment” for me 😉 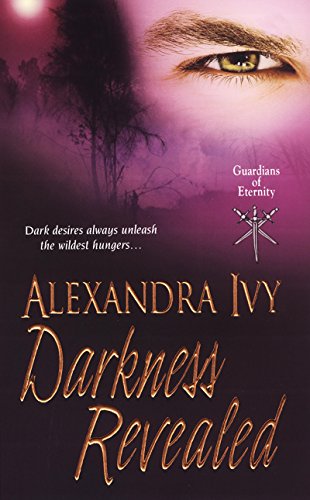