Dirty Filthy Rich Men (Dirty Duet Book 1)
Some of my book buds raved about this one, so I had it circulating on my TBR list for awhile now. The whole “jerk-faced bully” aspect intrigued me, and after a few starts and stops with other books this weekend, this one stuck. That intro (prologue) had me.

Janet: I really recommend Laurelin Paige’s’ duet, Dirty Filthy Rich Men and Dirty Filthy Rich Love – the story of Donovan and Sabrina! A good roller coaster ride through hot obsession, with some angst, some heart wrench and a buffet of good characters to love and loathe. Can’t wait for the follow ups!
Grey:   I finished in the wee small hours. – “He won’t remember me,” I insisted. ~ Dirty Filthy Rich Boys by Laurelin Paige. I have to type up my review, but yes!!!! I really enjoyed it, other than than the cliffy that I should have expected, and that isn’t a deal breaker for me… I can throw myself over a cliff when I know the end is in sight, and she already has a release date for the next book posted, (it is just a duet). It was hella hot, had a jerkface bully, witty banter, in short…it checked a lot of my boxes! …really enjoyed them. A mean ol’ bully and dark (not quite black, but greyish) undertones … Certainly was creeping up on my book catnip!!
Tessa: BULLY JERK!

…Seriously, this twisted stuff is what I adore the most. Just pure twisted jerks. Dirty, Filthy, Rich Men did not disappoint. Anyone who loves the darker, bully type hero, READ THIS! Seriously, I can’t believe how much I loved it. Thank you Grey for recommending it! …Seriously, CATNIP!! This is not for everyone but I’m so glad Grey brought it to my attention. *huggles Grey* My bully buddy.

Not just for the uncompromising, dominating bully feel (I always love to see how the bully breaks and falls in love… with his victim, no less), but the love triangle angle titillated me. Two super rich boys, one nice but flighty playboy (Weston), and one… not so nice, and so uncompromising when it came to his affections and attentions, that, while he could easily BE a playboy… he was too angry for that. And it fulfilled my angry, push-pull need.

I should never have engaged, wouldn’t have engaged in a hundred other similar situations, yet I’d been drawn to him. He’d drawn me to him. That’s the thing about Donovan Kincaid, the thing he was famous for— he was a known puppet master. He was a man who pulled the strings, and he’d pulled me to him.

So what’s it about?
Sabrina has a full scholarship to Harvard (a perfect student, from a good but middle-class family), and has a HUGE crush on a certain rich boy that is known for his playboy ways. One night, at a frat-party, while she’s spying on him with yet another girl, his best friend (Donovan) is spying on her, and calls her out on what she’s up to. He’s the other brooding rich boy in their group, and while he unabashedly and constantly intimidates her,

…he also saves her from a terrifying situation later on in the night. And they are forever linked. But she doesn’t know that yet.

Emotion overwhelmed me.
But it wasn’t just terror and humiliation that I felt. There was something even worse underneath it all. Something ugly but undeniable.
As soon as I recognized it, I flushed with panic.

And so their story begins.
Er, well… it does so, a few years later, when all of them have since graduated and moved on in their careers, and she lands a job with their famous advertising agency.

It was essentially the same job that I currently had, but Reach was so much bigger of a firm that it was a huge promotion. There was absolutely no reason to say no.

And now the real story begins. And is revealed. And will hook you AND yet drive you crazy.
Crazy? GAH! YES!!! *sigh* I found it went overboard for the most part in the mind-games of it all. It explored a difficult subject matter (albeit a real one, I’m sure), certain needs that required relief. Triggers, and coping mechanisms, and it just so happened two of the main characters were able to fulfill these very need for each other.
And yet… at times, I felt I was watching an episode of Gossip Girls, or some other rich-kid bullies turned rich-adult bullies that played games to keep those they were obsessed with, within their power. I dunno. It was good enough for me to read right through (and I did), and the end certainly had me intrigued enough to feel like moving onto the conclusion (a few reveals that loosened my annoyance with all the push-pull toying), and had me understanding on a different level.
But you guys… I was SO EXASPERATED. I eyerolled a TON. I was all… “OH COME ON!!!!!!! Really??” I’ll be honest. I can and DO love a vulnerable, insecure, even circumstantially-traumatized heroine. Every one of us has insecurities, life situations that have broken us, or can trigger us… and every single human in the world is vulnerable on some level. That is real to me.
However, when it came to this heroine, no matter how absolutely sure she was that she was DONE with the potential “love” interest’s mind games (and trust me…. he was OBVIOUS in his intent), she let it happen. Again and again. She’d be determined to stand up for herself, assert herself, or completely stand him up, and yet there she would be, following him into his version of her own customized “love-doll” hell. GRRRR!!!!!!
I can understand a heroine loving someone so much that they’re blind to certain imbalance and unfairness and disrespect (grrrrrrr!!!), but when it comes to degradation and flat-out admission by the “hero” (in this case… anti-hero) that they are NOTHING, and will never be ANYTHING?!! Well. I get TICKED OFF.

I felt the blood drain from my face, humiliated. Hurt. “There is no us” already stuck on a repeat loop in my brain.

GAH!!!! I was FURIOUS, and yet that HOOKED ME. I’m a mess.
Oh, no. I believe that kind of thing happens over and over again in real life… but I wanna shake someone! Don’t get me wrong. I was hooked, and yet I was extremely annoyed. How could I be into a story, and yet, so annoyed by it too?
This was one of those for me. Do I want to know how it ends with the conclusion book? I do. Am I ready to jump in right away after this emotional mind mess? Heck NO. I need a break 😉
3.75 stars
P.S. Here’s the Laurelin Paige – Dirty Duet Reading Order 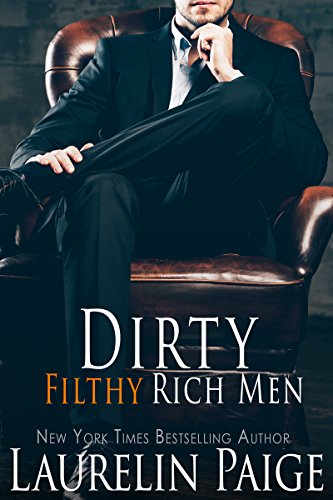 HAHAHAHAHA I love your review. Honestly, love it. 😀 Now, you should know, that in the conclusion, he reveals things he has done that will PISS YOU OFF BEYOND WORDS.
I did say it was dark and he was twisted…
😛

Oh jeez. Now I DO wanna read it after that, Tessa.
I kind of LOVE being PISSED BEYOND WORDS… I was just furious with her backtracking every time she made a decision.
*snort*
But now I’m extra curious…

Same here. That’s what made me laugh; how you got pissed off. I do too. That’s my favorite part. Also, how twisted his mind is. Both just add angst. 🙂

Bwahaha! *tosses the bully confetti* oh, Maryse! Isn’t it grand? *dances with Tessa*
I loved this review, I actually laughed out loud. You’re the best!