Another fantastic addition to the “Love at Stake” series. Very passionate, exciting, and emotionally investing. I’ve found over time, that my favorite paranormal books are those that involve clueless humans (which is the case with many of the books in this series). It’s always exciting when the mortal finds out that paranormals do exist. We get a funny dose of that in this one:

“Dead is dead all of the time, but Roman’s only dead when the sun is up.”

Caitlyn rubbed her brow. She was still tumbling down the rabbit hole and couldn’t tell which way was up. “So he’s fifty percent dead?”

As with most of the books in the series, this one goes fast in the attraction department. Unrealistically fast, at first, because we’re missing the initial “normal conversations” when two people first meet, or the hanging out a few times before the truth comes out, or even playing hard to get.

She inhaled sharply. Sheesh. The man had smiled, and she’d forgotten to breathe. Forgotten to think. She’d slipped into some sort of trance.

Upon glimpsing each other for the first time, the two main characters in this book:

All of this within, oh, I dunno…the first hour of meeting? But once you get past that initial scene (which, is very good, by the way – even though I’ve made fun of it a bit) it eventually paces itself. I fell for the story, the characters, and the hard decisions they had to make, and I even believed Carlos’s reasons for hestitating (over numerous issues).

So the story goes like this. Carlos, a were-panther (an almost extinct species) has gathered orphaned were-panther children from his home in Brazil, and is taking care of them at the Draganesti compound (since he works for them in security). His wish is to find a were-panther mate, and other were-panthers around the world, to help rebuild their population. He has a distinct duty to his people (what little are left of them), and is dead-set against diverging from his plans. ‘Cept, a monkey-wrench is thrown right into them.

When Shanna Draganesti’s sister (Caitlyn) shows up at the compound, they (Carlos and Caitlyn) find themselves irresistibly attracted to one another. If love at first sight exists, then this was it. One sniff however, tells him right away that she is human, and not for him.

“I don’t know,” she gasped for air, “but you’re doing it awfully well.”

“I didn’t object. I was actually participating. I thought you might have noticed.”

His insistence on sticking with his plan, and his disciplined resolve and resistance of Caitlyn gives her a run for her money.

Caitlyn gives him a run for his money too, since she’s now working at the compound as a translator. Due to her psychic abilities (which run in their family) she also has an amazing gift of understanding and speaking any language. Oh and, another aspect of her gift? All of her life, animals were drawn to her, and she found that she can even understand and communicate with them. Cats especially…Like Carlos 😉

Forced to work together in close proximity begins weakening Carlos’s resolve. Caitlyn, determined to get her man, insists on being in his way as often as she can.

There was no way Carlos could avoid her. If the attraction between them was real, it would grow. He couldn’t stop it.

I loved her spunky nature, even though, at times, I cringed – she can sure bounce back from rejection. I don’t know how much NO I would have been able to put up with. She’s almost a little stalker-ish at times, but hey, who are we kidding here? Carlos is pure unadulterated alpha male hotness, so why not? You’ve gotta be shameless to get what you want, and Caitlyn doesn’t seem to have a shame-gene in her body.

What’s a man to do when his “dream girl” keeps throwing herself at him, despite his refusal to give in to her. Leave. It’s the only way he can pursue his goal, and forget about “her”. He heads up a trip to Asia to possibly find his were-panther mate. But there’s yet another snag, and Caitlyn appears to be hindering him again. Awwwww…..poor Carlos. He can’t ever catch a break.

Read it! It’s good. SO good. I pretty much read it in one sitting, with no desire to put it down. Their story captured me from start to finish, and there were many MANY bumps in the road. And not just one kind of bump. Lots of kinds 😉 You’ll find yourself swooning, chuckling like crazy (oh this book is witty)…

…cringing in embarrassment, swooning again, gritting your teeth in frustration and biting your nails in anticipation for what’s next.  From danger in the emotional aspect, to danger in the enemy aspect, you won’t be bored reading this one. Definitely a stand-out in this series (and it’s fine as a stand alone read. You won’t be lost.)

However, since the entire series is just so fun, and so romantic, here is the series reading order guide. I highly recommend it —–> Kerrelyn Sparks – Love at Stake Series Reading order: 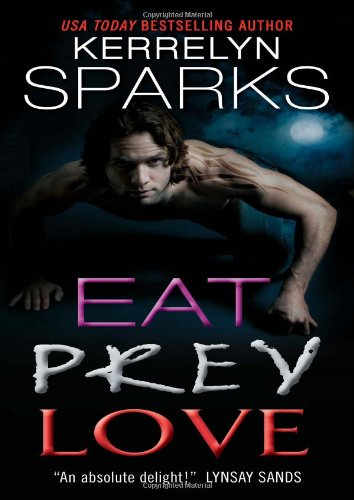 Just finished this book. Absolutely loved it. I have enjoyed this entire series. Thanks Kerrelyn for your fascinating imagination and thanks Maryse for your reviews. Love reading them as always!

A very good addition to series. I also find myself looking forward to your reviews as well.

Awwww thank you guys!! And I really look forward to your comments. They make my day 🙂 Did you see the next book will be Connor’s? Finally. I’ve been wondering about him.