Envy: A Novel of the Fallen Angels
Pooooor book review. Being written so late in the game, when I actually finished this book over two weeks ago!! But, as you all know, I got caught up in life. First with a business trip smack-dab in the middle of my Envy read, and then, right when I was about to start my Envy review, my world turned Fifty Shades of Grey. My Envy review ended up on the back burner. And I would say that, in itself, speaks volumes.

Envy was very good, but not all-consuming. I did however, really enjoy the book. Oh sure, I was able to put it down, but I was always happy to pick it back up. No real boredom issues, just… no driving need to see what happened next. It had a great couple of stories going on at the same time. A book that fit perfectly in the series, and, actually might have been one of the better ones, in terms of the grand scheme of things. Lots of lessons learned, even for the angels (fallen and not fallen, alike). The main couple however, did not burn me to the core like that past two couples have. I liked them, enjoyed their journey, but I suppose I didn’t relate as much.

Basically, Jim Heron (an angel of sorts) has another soul to attempt to rescue, in his war against Devina (good vs. evil). She being evil, will tempt the soul into choosing the dark side, becoming one of her souls. The state of the world and of  Heaven, rests on good “winning” the bulk of the souls. If evil wins… well. You know.

He got defeated? That demon had dominion over not only earth but the heavens above… which meant his mother and all the good souls up there, as well as him and his fallen angel soldiers, were looking at an eternity of damnation.

But Jim doesn’t know who the next soul is. He has never known right off the bat, just a few clues to possibly lead him to the soul in distress. But the clues are difficult, and the last soul was lost due to Jim’s “barely there” assistance from the heavens.

When you told a guy he was supposed to influence some jackass at a crossroads in his or her life, it kind of helped if you frickin’ told him who was on deck. After all, it wasn’t a big go*%&*n secret: Nigel knew. The enemy, Devina, knew. Jim? not so much, people. And courtesy of that informational black hole, he’d focused on the wrong man in the last round and blown it.

But Jim’s got a better plan (well better for him now… maybe not so much in the long run) on finding the soul immediately, and avoiding all the guessing games.

So the latest soul up for grabs? Thomas DelVecchio (Veck), a police detective with a possible dark side. Literally. It is a part of him, constantly within him, following him, swallowing him whole. He feels it. He thinks he even sees it. His father is a famed serial killer on death row, and poor “Veck” shares his very name, his blood, and worse yet, fears he might share his very compulsions.

After an almost fatal attack on another human serial killer (see end of J.R. Ward’s Lover Unleashed), Veck is on the scene to call for help. Despite being there while the attack occurred, he can’t remember how it happened. He (as do a few other detectives) suspect it may have been him. His hot-headed reputation, his notorious “killer” bloodline, and his case of sudden amnesia does not fare well for his innocence in the matter. Always at doubts with his own morality, he can’t blame them.

Detective Sophia Reilly (a pretty, but no-nonsense, no frills attached… for now 😉 detective) is assigned to his case.

In the meantime, Reilly was going to see whether or not the son had lived up to the father’s horrors.

As luck would have it, they are both extremely attracted to one another, however his doubt it his self worth, and her doubt in her “attractiveness” to a man like him provides the reader with a touch of emotional agony. They like each other, but don’t seem to like themselves enough to let go. So there’s that. Two people working together to solve a dilemma (the murders, a missing persons case, “Veck’s” own dark secrets), while trying to keep each other at arms length.

‘Cept as in all of J.R. Ward’s novels, that tumultuous attraction is front row and center, and steams right off the pages (or in my case, the iPad).

“I want to…” The word was so crass that he kept it to himself.

He leaned in and put his lips by her ear. “You know exactly what I want.”

And that isn’t the only story we’re dealing with in this novel. The Fallen Angels (Adrian and Eddie) are struggling with Jim and his new focus. Sissy (a young woman who’s innocent soul is suffering in Devina’s evil clutches). But for some reason, Jim is centering much of his focus on her, and the fallen angels are questioning his motives, and his direction.

Cecilia didn’t belong in hell. She was an innocent taken and used by evil – and Jim was going to set her free, if it was the last thing he did.

Jim realizes the key to winning might just be by playing Devina’s dirty games and Devina is all to willing to play with him. Evil has a crush. Ew!

All she wanted to do was mope around and pace.

It was all Jim Heron’s fault. He was just too defiant. Dominant. Extraordinary.

He had been chosen by her and that supercilious sonofabitch Nigel because Heron was equal parts good and evil – and as she had learned through the ages, when it came to mankind, evil always won. In fact, she’d assumed that drawing him over to her side would be nothing but a tedious bore, the kind of thing she had done to men and women since time had cast it’s first hour so very long ago.

Instead… it was she who had been sucked in and seduced.

The angels upstairs are in a tizzy. The rules are being bent, broken, and the results might just be in question. And if Jim keeps up his own version of these “soul-saving” rules, I wonder… how will this affect his own soul in the long run?

Lots to deal with in this one, two humans finding themselves, finding each other, and some heartache to really throw you for a loop. Well worth the read. Might not turn your world upside down, but should definitely keep you wanting more!

Interested in the series? Check out the reading order guide here: https://www.maryse.net/reading-order-guide/j-r-ward-fallen-angels-series-reading-order.html 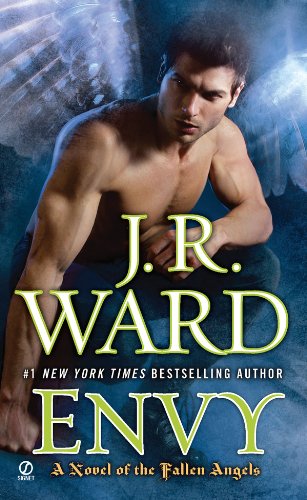 Awwwww, reading your post made me miss the book!!! Remember how excited I was last year to see Throe in her new book, well I guess when they mentioned *Vampire*, that was him…hehehehe
I was wanting him in all his Glory 😉

But thanks for the review so I could re~live my obsession.

Sherry! That’s right! I was wondering who the leatherbound vampire was.. of course! Throe!!!