X
You are here: Home / My Book Reviews / Book Review – Evelyn, After by Victoria Helen Stone

Evelyn, After: A Novel
One of the best tales of a character’s “downward spiral” I’ve read all year!! WOW!!!!! It’s considered a psych-thriller, but mostly because we were so busy trying to figure out where this one was going, the entire time, feeling like it could totally blow up in our faces. What was going to happen?!! My lips are sealed, other than I can promise that it will have you addicted, feeling the main character’s every single emotion.

It’s the story of a woman’s emotional, personal devastation, and we get to live it with her, via three dramatic storylines going on at the same time. All interrelated… a domino effect, if you will, and ALL connected to the heroine.

Maryse: The heroine in the book I’m reading is having an emotional breakdown/downward spiral and it’s been happening so slowly… smoothly as I’ve been reading, that I didn’t realize it until now. Because I’m a bundle of nerves. I feel like it’s me. I’m in a panic, and I have nothing to panic about. GAH!!!

I had already one-clicked it as my ““Kindle First”” choice of the month, but it was Amy’s reaction to it that had me moving it right to the top of my TBR list. And of course, Amy would choose this book, too! 😉 We have the same book-taste!

Amy: …Evelyn, After was *screaming* my name so I had no choice but to click it.

Amy: Okay, I feel like I’m reading Evelyn, After by peeking through my fingers. I keep cringing and am just waiting for it to blow up. Gah! Knowing she is about to add to the figurative body count has me all sorts of antsy and its FUN!!

After many years being married to the same man, Evelyn finds herself resentful of her husband. He’s a renown psychiatrist and she feels he doesn’t respect her or maybe even love her. Belittles her. She’s become the house wife he expects her to be, slowly losing her free-spirited, artistic and happy self. Her main reason for living is to take care of her home, her son, her husband, and she has become a consummate people pleaser, obsessed and stressed beyond all measure making sure everyone is happy with her. And she finds herself taking prescription sleeping pills just to sleep at night… slowly becoming numb to the world, and to her own life.

Until one night, her husband calls her in a panic, demanding she come to help him out of a ditch, where he ran his car off the road. In a drug-induced stupor, she does her best to come to his aid, wondering why he would even call her for something like this? But when she gets there via his very specific set of instructions, and assists him, she feels like something is amiss, though her husband insists all is well, and her mind is simply fuzzy due to her medication. Yet as she drives away looking in her rearview mirror, she sees a woman pop up, that was hiding in his car with him.

His lover. And also, his patient.

And I’m stopping there. This happens right at the beginning so you still have a whole crazy tale to discover!

Maryse: Okay I’m with Amy… Evelyn, After is making me a ball of nerves. ALL THE WAY THROUGH. It’s addicting, and very subtle in its “crazy”. You don’t even realize it, until you’re a panicky mess, all strung out on desperation and intense emotion, and … I won’t say anymore. I’m at 80% and I’m dying to know where this is going. Yep. I’m a wreck. Emotional in all ways.

Amy: OMG I’m so glad you’re having as much fun with Evelyn, After as I did, Maryse!! I updated my reading status on GR with this quote at one point:

“But even if she wanted the best for her son, she wanted the worst for Juliette Whitman. Jealousy and pain and a yearning for justice braided themselves into a thick rope of hatred that wound through Evelyn. It squeezed her, twisting her nerves, changing her body. It hurt.”

GAH!! Those last two words! I couldn’t help but feel everything right along with her, rational or not.

“…until you’re a panicky mess, all strung out on desperation and intense emotion…” <—— EXACTLY! YES!!!

The whole way through, slowly but surely, I was finding myself in an absolute panic with the main character. I’d almost say, introspect-wise (and life altering-wise) this had a “The Girl On the Train” feel mixed in with that recent “Behind Closed Doors” (<— but NOT AT ALL the same story). This one is absolutely it’s own thing.

I second-guess my comparison because, while I DO consider this a psychological thriller, it was a different kind. Not as scary, at least not along those lines. ‘Cause while many psych-thrillers have a far-fetched tale to tell (maybe even unbelievable, to our reality-relief), this one hits close to home, because it’s so realistic in so many ways.

Amy: OMG…there is so much more going on than just her finding out about her husband’s infidelity. This poor woman goes from unraveling to pulling herself together and then back to unraveling, and now I’m just waiting for her to implode. And you know what the scary thing is? I can see myself behaving the same way she is behaving.

Nothing is too… “out there” and yet, your emotional connection and reactions to it will be delightfully over-the-top! It had me on the edge of my seat, turning each page with my heart in my throat!

Amy: The ending wasn’t as BAM as I thought it might be, more like a “realization” sort of ending. But you know what? After the emotional highs and lows from the rest of the book, I was just fine with it ending that way. It was a good solid 4 stars for me that read fast.

I agree with you Amy. Considering the high-intensity and level of personal trauma and detriment and potential reveal (because it could have been anything) that was looming throughout, the ending was a bit “light” compared to what I was expecting. The impact of it all once it came full circle. That said… I could see it perfectly if this was in a movie, and I think it would work. And right to the very last page, I found myself trying to catch my breath from its whirlwind.

P.S. There’s a… love story, too, that will get you right in the heart-feels. 😉 Not saying anymore. 😛

bev: I grabbed the Evelyn one too. It’s Victoria Dahl, right. A pseudonym for her?

Leslie: I didn’t know that Evelyn book is Victoria Dahl! Cool! I LOVED some of her contemporaries. 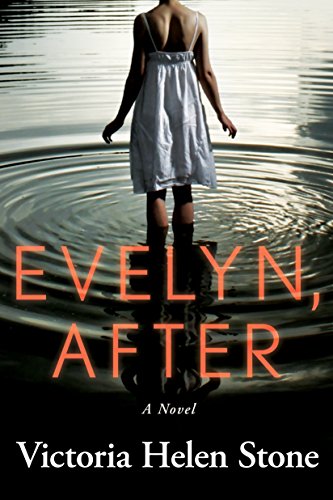 Great review Maryse. I wish I had jumped in to read it with you and Amy but I definitely have it lined up now.

Right from the first few pages, when she thought about going and writing the word “whore” across the sign on the art gallery, I knew I was going to connect with this lady. But she is better than me because I would have actually done it. *snort* And oh, my heart…the scene in the hotel room. Talk about a cluster%#$k of emotions.

I would have liked a *little* more when things were being wrapped up with the ending (instead of simply being told about them) but honestly that’s my only real complaint. 😀

Fabi!! Definitely don’t let this one get buried!

Thank you for recommending this book!!!! Absolutely amazing. Couldn’t put it down. Loved it. It was exactly what I needed. I want more books like this that just consume me. Any more recommendations? Pretty please 😉

I’d say take a look at this list: https://www.maryse.net/books/book-recommendations/highly-recommended-psychological-thriller-books.html