X
You are here: Home / My Book Reviews / Book Review – Every Rose by Lynetta Halat

Every Rose
You guys had me so excited (and SO scared) with this adamantly recommended book (and I really only paid attention when I noticed fellow reader, Liz, suggested it as her favorite for my “so good I forgot to eat” list). Once I read that, noticed the other recommendations pouring in as other readers agreed with her, and coupled those with that crazy warning “intro” to the synopsis, I knew I was in! And I was in for pain, but I wanted that kind of intensity. Bring it on!

Jenn: I took a chance on a book yesterday.  Every Rose by Lynetta Halat. Did not even read what it was about….I bought this book purely for the absolutely gorgeous cover. OH HAPPY DAY I ABSOLUTELY LOVED IT.

Liz: One of my favorite books ever!!!

Bobbie: Every Rose by Lynetta Halat. Fabulous read but not for the faint of heart. It is life-changing.

Finest: Every Rose is a must read like yesterday!!!

Stacy: If you love a great love story then Every Rose it a great one. It will have you laughing and ugly crying in no time. It is such an emotional read not only did I not want to put it down to eat but I didn’t want to sleep. I was getting misty eyed reading what everyone else was saying about it and can’t wait to know what you think.

Melanie: Every Rose is a must read!!!!

Concetta: You won’t regret it, I can promise….but bring the kleenex box along for the ride.

Maureen: Amazing book! Michael Bang is a dream. Put your Kindle in a waterproof cover!

Well… after reactions like that… (ugly cry?!!! YES!!!) how could I possibly resist?

And… I liked it! Especially the beginning, the writing style, the sweeeeeeetness of it all. This is another one that had that “Sweet Gum Tree” feel. Or kind of like… “Butterfly Weeds” (full of romantic tension and angst, but not so “steamy” by way of scenes).

It’s sexy but kind of has that wholesome, life lesson feel. That “best friends” to “potential love” story… ’cause one of ’em is SO in love with the other, and the other resists like mad. First, ’cause she doesn’t think she’s in love with him back, and second, ’cause she’s afraid to eventually ruin the friendship. I do love those ’cause every once in awhile, the “resister” starts paying attention to those butterflies, and the jealous twinges, and the persister starts… letting go.

I never wanted to hurt him. I try to move toward him. “Michael, I -”

He throws his hands up, warding me off. “No it’s all good. Take care, Lorraina. See ya around.”

Ohhhh the drama that might ensue! I was anticipating… anything, and I loved that anything could happen.

And this one’s not so much about the bad boy/ good girl love story (although “Mike” is considered a “bad boy” with his temper tantrums, fighting, and constantly being suspended from school). Mix all that in with being considered from a “trash family”, and you’ve got yourself the makings of an angry teen/forbidden love story. And true love does not scare this guy away but his patience, and willingness to be there for her no matter what she insists upon, had me really connecting to him.

Oh and, no worries. You get the teen part of their friendship, but this is not YA, ’cause eventually, we move into the adult stage, where we get to experience all of the emotions, troubles and potential growth that comes with it.

Lorraina and Michael become friends in high school. Both from troubled families, with a lot of personal issues in common, so they really connect (but in secret as her father has warned her against him).

Surprisingly, it seemed Michael was off limits to me. I was told that in no uncertain terms the whole Bang family was trash and that I’d better steer clear. If I was caught so much as talking to Michael, I would get the whooping of my life. I knew he meant it too. Daddy never was one for empty threats.

So their friendship remains the ultimate secret. Taboo. Forbidden. And despite all of this, Michael is very clear about his intentions for Lorraina…

“And why would I ever want to call you?”

“Well, how else are you going to get to know your future husband?”

I hear myself laugh a flirty little laugh, but it is a bravado for sure.

But she rebuffs his every profession of love.

That was the whole of our first conversation. Short, simple, to the point. Names, brief introductions, marriage proposal. I really was intrigued even though I knew I shouldn’t be. I also very much liked the attention that he was giving me. That feeling would wear off quickly enough, though.

“Don’t you ever hang up on me again,” he said through his teeth.

I’ve never heard him get angry with me before. I cringed. Then, a part of me delighted. I didn’t get that.

But graduation eventually separates them, and their academic careers lead them in different ways.

“He used to be my best friend, but we lost touch.” I give her a very simplified version of our very complicated history.

Until one day, four years later, she goes home and sees him again. He’s gorgeous beyond her recollection. The lanky “cute” teen is now a coveted man, and every feeling stirs in her that he (once upon a time) ever wanted. But he’s sooooo…. different now. Sexy. Confident.

I gawk at his lithe body. In high school, Michael was still Michael. He was beautiful but not like this. He was kind of lanky in high school and a little self-concious. Now, he looks so strong, so stable.

And so the game of pursuit changes.

I enjoyed it immensely, with just a few bouts of “slow” that had me able to put it down. But it also had many bouts that wow’d me or scared me.

So what about that crazy synopsis warning?

*skip the next part if you want to go in not knowing anymore… I don’t *spoil* it, but I prefer those who are like me (anti-spoiler), to go in having NO clue, so…. you know… the next part, is not for you. ;)*

What about those telling us to keep a box of tissues handy?

I can’t discuss that in detail because where this book leads us, if and how it resolves itself is up to you to find out (if you’re game).

Did I cry? Well…. this is where my rating changed. Because while I anticipated *crazy* at some point, I… didn’t react as strongly as I was hoping to. Was it because I was overly warned, or prepared? Maybe partly… but I think it’s more this: while so much time and effort was spent of the sweet build of the story (as teen best friends), and all of that tension and emotion as adults (which I LOVED!), I think the *reveal* and the subsequent character reactions to the “reveal” didn’t get as much detail as it so deserved.

I’m not saying the reactions weren’t right, just that I wasn’t indulged in it. Steeped in it. Bombarded by it. And something like that should have had me reeling.

That said, this is still a sweet, well written love story (albeit at times a bit… distractingly mushy) that had many amazing touches, phenomenal sentiments and realistic scenes that I will never forget.

Life is tragic. A lot of people interpret that to mean all doom and gloom; but, to me, within tragedy there lies a chance for a new beginning, a new life.

And for that, I give this book 4 stars! 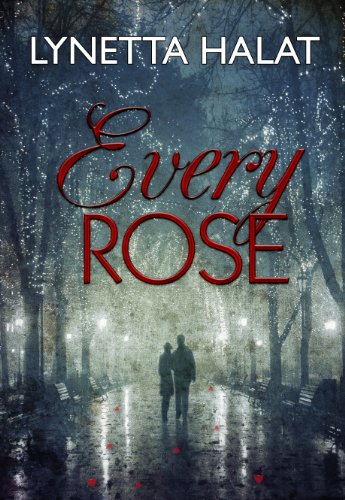 I soooo enjoyed your review. All those excerpts really sold me.

This book was so sweet at first. It pulled me in and then shocked the crap out if me. I cried and even considered stopping the story it was so abruptly sad all of the sudden. Overall. I enjoyed it. And gotta show love to a fellow MS girl!

So have been reading this all day and I think marsye was right on rating it a 4. Seemed on certain points like it was fast paced and then the emotional side didn’t have me as upset or sad as I think I could of been. Overall it is a nice sweet love story

OMG I did not see that coming! I read the whole book today. … This one is a 4 for me. A definate must read. Nothing will out rate my favorite book ever “Taking Chances”

I started Every Rose a couple of evenings back when you proposed starting it *together* that night. While I didn’t have the visceral reaction I was expecting, it was a sweet love story, and I am glad I was introduced to it. 🙂

I went into this book completly unaware of anything other than it is a must read. Oh man, did I ugly cry! It was a weird kind of ugly cry because I was so shocked at first. It wasn’t until everything settled in that I really let it rip. Wow! Just…..wow!