Exposure (East Park)
<—- OMG that was steamy but done soooooo right. I absolutely LOVED it. I couldn’t (and still can’t) believe my luck when I saw this one pointed out by a fellow reader, because it was exactly what I needed. Angsty, but not too angsty. Super-sexy, but not over-the-top. It was witty, realistically romantic, had amazing dialogue, and had enough tension (and a few “forbidden” touches) to keep me glued.

At the time it was brought to my attention, there wasn’t much info by way of our fellow readers (as none of us had read it yet), but that synopsis had me, so I highlighted it on my latest bargain post. And then… a few of you picked it up, read it and LOVED it. And I’m RIGHT there with you! I didn’t put it down once.

Emily: I just finished “Exposure” by Iris Blaire and I really enjoyed it. A fast, easy read with plenty of tension and steam worthy moments. I’m excited to see how this story continues.

Anna: Just bought and read Exposure.  Totally hot.  Adore both MCs.  Picked it up and didn’t stop reading until I was done.

I’d almost say I “5-star” loved it because, to me, it had just enough of everything to make it almost my perfect read. But it was missing one tiny thing. Length. 😉 Tee hee. Oh come on… you know what I mean. *blush* It played out seamlessly, and while there were just a few things I would have wanted explored in more detail like…the girlfriend… stuff (and er… *more* other… stuff

), I think had the book been longer, these tiny hiccups wouldn’t have been an issue. That, plus a little extra of everything intense (more time in those moments, and more time in the angst) and I would have been a puddle of mush.

But, at 151 pages, this author ROCKED it, so imagine had it been 300 or 350 pages? If I was allowed even that much more time with Dallas, I have a feeling I’d be in a severe love-fog right now, rendering me delightfully useless. I lovvvve that feeling (when it’s book-induced, of course). 😉 But despite it’s shortish length, it still affected me enough to have me dreaming of it. And interestingly enough, it wasn’t so much the “steamy” that I was dreaming of, as much as it was the subtle gestures of affection, and looks. Specifically, I dreamed of the pining, and the stolen moments. It is that kind of detail, that has me falling and connecting.

And as much as these two wanted each other, there were (believable) issues standing in their way. Which made their connection even more intense, and the stolen moments that much more affecting. A sexy book, yes (and WOW what a premise), but so much more about those first stages of attraction and maybe even love, amongst all of that *hot*.

Dallas runs the pad of his thumb against my jaw and whispers in my ear, “You’re good at faking it.”

I suppose it might be considered New Adult, considering both main characters are in University, but this one just had a slightly “older’ feel to it than many of the NA that I’ve been reading lately. Mature, determined characters with serious heads on their shoulders. And not so much “innocence” dictating the angst. More… the realistically “forbidden”.

Evan (oh that was another of my issues. The fact that almost every character had a unisex name was confusing at first, but I found the rhythm soon enough). Okay back to the story…

I get paid well. A couple hours of shoots a week is better than thirty hours at the coffee shop, which is what I was doing when first starting college. But pulling straight As in class like molecular biology and immunobiotechnology isn’t exactly a cake walk. I need time. I need to eat.

East park exposed let me do both of those things. All I have to do is look like a naked Bratz doll for a couple of hours a week and boom. Groceries paid, tuition paid, rent paid.

Best friends with the talented female photographer, and the other main female model, the three of them are roommates and “stars” at school. Except that “Evan” is a plain-Jane on purpose (so that she is not recognized). Nobody knows normal college girl “Evan” is actually sex-pot “Rylan” and she goes out of her way to keep it that way. No boyfriends, no real socializing, and nothing for anyone to put “two and two” together.

No guys ever have the opportunity to connect Evan Cosette to Ryan Willow. And I’d like to keep it that way.

I know… believe me, at first, I was skeptical too. How could someone so high profile and coveted, be able to walk around in public, amongst her fans, without being recognized? While they are both the same girl, bombshell “Rylan” (with eyelashes, full makeup, and hair) does not look like the frumpy-on-purpose Evan. Glasses, full freckles, no lashes, messy bun. Nondescript clothing.

I take out my contacts and shove my glasses on my face.

Little ugly Evan is back. Glorious freckles and all.

Same girl yes, but two different girls to anyone not specifically looking for it.

I’ve managed this sh!t for two years without being recognized. I can manage one more semester.

But when her best-friend photographer wants to include some gorgeous male students as models in the photo shoots (to expand readership to female fans), Evan goes ballistic.

That’s too close for comfort and risks “outing” her if the news got out. If the guys realize who she actually is, before she becomes “Rylan”. And it doesn’t help matters (for her, but it sure did for me!! :D) when the one she has to work with just so happens to be the gorgeous grad student (Dallas) teaching her class that morning. Eeeeeeep!!! (and YAY!!!!)

“He’s in my department, Brit. The first time a subscriber sees the two of us near each other, they are going to figure out exactly who I am.

And of course, they are AMAZING together in the photos.

My skin vibrates with his laughter. He’s aware of how much this is killing me.

This session just turned from smoldering hot to pure torture.

Dallas crawls forward until his body covers mine. “Don’t mind me,” he murmurs, still grinning.

Dallas lights her up in every way, no matter how hard she tries to resist. For her own needs (she wants to stay focused on school, on anonymity and well… he has a girlfriend).

Yes, my girlfriend wants me to pose for East Park Exposed. The mag is so popular, she said. You’ll get your face out there. Your modeling career will take off.

She’s been pushing the modeling thing ever since I decided to go into field research instead of med school. It’s her way of making sure I’m still going to be paying some bills, since now I’ll be getting my PhD for a five-figure salary.

But Dallas is OMG!!!!!! Soooooo sexy, so swooooonworthy, such a gentleman (and yet at times, when he can’t help himself… totally not

). But SUCH A SWEETHEART. So gorgeous, so intelligent, and the ultimate catch. Nope. No bad boy here, but I loved him just as intensely as if he was.

And don’t forget… he still only knows her as “Rylan” (who just so happens to be his favorite model from back when he was just a subscriber). 😉 And now he’s struggling with his own conscience as he tries to squash his increasing *crush* on her, while having to simulate intimacy. And what happens when simulation begins to feel real… and risks crossing the line?

Ohhhh the forbidden attraction. So fun!!!! Go read it. It’s SOOOO worth every minute, and I’m desperate for more!

Great writing, awesome characters, a slowly (but not too slowly) developing friendship craving for more. Original storyline (but believable). Definitely one for my “Favorite “Short” Stories” list, ’cause this was the PERFECT short. 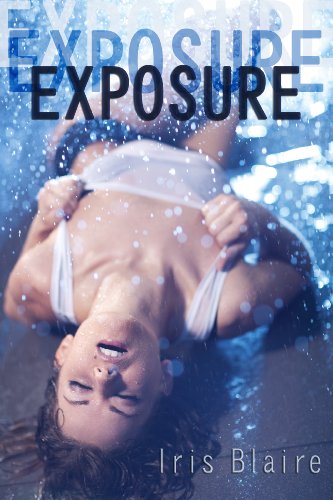 Ohhhh I am excited about that. Think it’s gonna be about her roommate, Delilah? I hope so…

I loved this one too. It reminded me of Tragic by JA Huss.

That’s the one m reading now! I needed more of that “feel”.

I loved this book! I couldn’t believe how much so. I was wishing for more pages because I wasn’t ready to let go of the characters. So excited for the next one!

Loved this book! It was so refreshing and the sexual tension build up…..Daayyymmm. The whole damn book was foreplay. I can’t wait for book 2, I read the synopsis and it looks like Dallas and Evan have a bit more drama ahead of them. And it has a cover reveal.
https://irisblaire.blogspot.com/2013/06/dark-fram-cover-reveal.html

Just read it in one sitting! 5 stars from me LOVED it!!

Great review Maryse! It will DEFINITELY be my next read….sounds so different then what’s been out there lately, but I just started The Mighty Storm last night so I know you will understand that I can’t put that down yet!!

But when done, rest assured, this one will certainly tickle your romance-bone. 😉

This looks so good! I love a book with some yummy slow building sexual tension, especially when it’s just between the two main characters. I’m sort of over the whole love triangle thing right now. Loved the review, Maryse, and can’t wait to read this one!

Just read it and loved it. Waaaaay to short bring on next book please. Love me some Dallas and Evan together and its just getting started. Ugh:(

Thanks for recommending this one! I super loved it!! I’m off to see if I can find anything else by the author. My only complaint was that it was too short! Dallas made me swoon.

Finished this, this this morning. Wonderful read. I love the tension and the build up. I <3 Dallas.

Wow! After this review I want to read this book so bad. 🙂
I just saw your email with latest book releases and this book just popped up. So after all those new releases I can kiss my social life goodbye 😉

Great review, you’ve sold me 🙂
Just checked it out on Smashwords, and it’s free!