This was a good start to a series that has been highly recommended. I will try to make this a quick review, while it is still fresh on my mind (considering most of you have already read this book). I’m so behind on this series, that I’m anxious to get started on the next, but not until I’ve given this one it’s due!

When I heard that these books were about Greek mythology and Greek gods, I really didn’t expect the setting to take place in “modern” times, so I enjoyed the little twist of ancient gods thrown into our current world.

This novel is about a lonely, and somewhat jaded sex therapist (Grace Alexander), who is encouraged by her more free spirited tarot-reading friend (Selena) to perform a little ritual. Using a strange book that “called” to Selena, they summon a “sex slave”, on the full moon, so that Grace may enjoy a few unadulterated nights.

Although apprehensive, Grace humors Selena, and summons Julian of Macedon to appear. She had never put much faith into Selena’s “abilities” and doesn’t see what harm could come of this ceremony.

Grace held the book in one hand, opened her arms wide, tipped her head back, and implored the dark sky above, “Oh, take me, great gorgeous love-slave and have your wicked way with me. I command you to rise,” she said wagging her eyebrows.

Selena snorted, “That’s not how you do it. You have to say his name three times.”

Her hands on her hips, Selena glared at her. “Julian of Macedon.”

To her astonishment, a little later, Julian, shows up stunningly naked, offering himself to her for the next month to do with him as she pleases.

Her senses dulled, Grace look up and…

Quite honestly, there was only one thing she saw, and it made her face hotter than Cajun gumbo. After all, how could she miss it since it was just an arms reach away. And it was such a large it, too.

He then proceeds to kiss her and make his moves on her. While she finds him irresistibly gorgeous, she quickly comes to her senses, resisting him, appalled at the idea of simply using him without knowing him first (and vice versa). Julian’s sexual prowess transforms into a stoic and slightly humbled demeanor, as he is shocked and embarrassed that she is refusing him (never having been refused in the past).

Grace, realizes that they are now forced together until the next full moon (when he will be sent back again, into the book).

Here is a sweet moment, on the first night that they are together. Grace has to go to sleep, so she turns on the TV for him;

Now, that should keep him busy. After all, men only needed three things to be happy – food, sex and a remote. Two out of three ought to satisfy him for a bit.

“Well,” she said, heading for the stairs. “Good night.”

As she started past him, he touched her arm. Even though his hand was light, it sent a shock wave through her.

His face impassive, raw emotions flickered in his eyes. She saw his torment, his need, but most of all, she saw his loneliness.

He didn’t want her to leave.

Licking her suddenly dry lips, she said something she couldn’t believe. “I have another tv in my room. Why don’t you watch that one while I sleep?”

He gave her a sheepish smile.

Julian followed her up the stairs, amazed that she had understood him without his speaking. That she would consider his need not to be alone while she had her own concerns.

It made him feel strange toward her. Put an odd feeling in his stomach.

While they adapt to the strange situation, and become accustomed to one another’s company, Julian reluctantly opens up to Grace, recounting the days of his life which had always been devoid of love. Raised amongst humans as a Spartan, but the son of Aphrodite, he was beaten as a child to build his warrior stamina. All the while he was “blessed” (or damned, depending on how you look at it) with an exterior beauty that forced all around him to either demand his physical attentions or envy him. Most men, including his godly brothers, reacted with venomous hatred. Eventually he became a legendary Spartan warrior. An act of jealous revenge eventually doomed him to a life as a sex slave living in solitary confinement, until temporarily summoned.

Grace gradually lets him into her heart. Due to her own sexual discomfort (she was “used” by someone she loved, on a bet), she refuses to “use” him. In fact, she is bound and determined to find out how to release him of this book, and the wretched curse that has wreaked havoc on his soul.

One night, after she turns off all the lights, Grace realizes that Julian seems to be having a silent panic attack next to her.

It was then, she knew.

It was the darkness. That was why he had only dimmed the lights.

Grace pulled him into her arms, amazed at the way a man as strong as this one held on to her as if he couldn’t let go. Julian laid his head against her breasts.

Clenching her teeth, she felt tears sting her eyes. And in that moment, she knew she could never let him go back into that book. Never.

Somehow, they would beat this curse. And when it was over, she hoped Julian got his revenge against the ones responsible.

They share deep conversations, and spend gentle evenings in each others arms, while she reads to him. Teaching him the ways of her world, (reading, driving, and dressing – he prefers nude) she finds herself looking forward to coming home to him after work, and realizes she never wants to let him go. In turn, for the first time in his life, he experiences warmth, and compassion, that awakens a deep love in him that he never thought he’d experience.

He watched as she grew tired, but she continued to read. The clock above struck three as she yawned and turned a page.

She tried to blink her eyes open, but her exhaustion was too much. Finally, she closed her eyes and fell asleep.

Julian smiled as he took the book from her hand and set it aside. He cupped her cheek while he watched her.

He wasn’t sleepy. He didn’t want to miss a single second of being with her. Watching her, touching her. Absorbing her. He would treasure it forever.

If you are in for a touching read, with ample amounts of emotional drama, life threatening situations, and a curse that just won’t let go, Julian is certain to please you well 😉 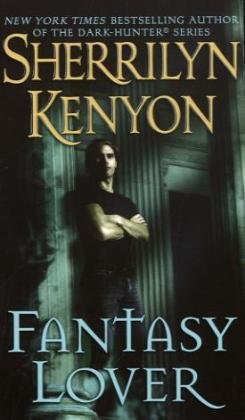 I love this series, although Fantasy Lover was my least favorite.

This book is very touching. To be a son of god slash Spartan General, usually will give you a very tough, hard headed and ill-tempered commander image in mind. For all its glory, to be cursed to be a sex slave, I think was a very hard hit on his ego. Especially he was quite opposite from your regular ‘you all do it while I sit back right here and claim all the glory’ type of general .He was hardworking, gentle and patient with his friend and family. He used to fight for everything he needs but then fates turned from his side he was rather helpless trap in a book.
Such a great heart doesn’t deserve ALONE in the dark. He was left there patiently waiting for someone to summon him

There are some highlights in the story that are very vivid to my mind up ‘till now. My fav part is when Julian sold his ring to compile Grace’s book collection. I really felt it. My books are not a whole room collection but I cherish each piece and every book gives me different memories. Oh oh and another thing, I also loved the scene where Grace told Julian her last name was Alexander. I swear my heart stopped beating when I read that part.
From then on every time I read about the two of them in other books. They always make me smile. They are one of the helping hands you could definitely use in New Orleans. Although I have to say I don’t like the part when Julian helped Kryian beat Valerius in Seize the Night. They are like bullies while Valerius is not fighting back. Men and there tempers. tsktsktsk