NOTE: For those that haven’t read book #1 yet, this book is the continuation (and conclusion) to this wonderful famous actor/normal girl love story, so don’t spoil it by reading below. Instead, take a look at my review for book #1 ➜ Eversea by Natasha Boyd.

After the ending of book #1, I couldn’t wait for the conclusion of this love “duet” series. And lucky me!! I didn’t have to, ’cause this series (including a Christmas novella) is complete. I jumped right into this one to see where it was going. Heartbreak was front and center and giving me chest pains. Imagine the dream of meeting a Hollywood heartthrob, become his friend, getting attached to him and falling head-over-heels FAST in love (who wouldn’t?) only to have that blissful bubble burst when his real life comes calling with all sorts of scandalous threats.

WOW!! I had to know where it was going, and while I was surprised at when (time-wise) book #2 started, I quickly understood exactly why. It all made sense, and actually made the pain (and hope!!) from the previous ending, even that more agonizing!

But when they finally meet again… THAT was exactly what I expected (and hoped for). Oh no… don’t even think it’s all butterflies and love songs. It is full-on distressing, and everything I want, when experiencing the highs and lows of an almost impossible love story, like this one. After all… be careful what you wish for, ’cause you just might get it, and all that, right? And she didn’t even really wish for it, but she was warned. She knew… and still, she fell in love. HARD.

I wished I fought harder and protected myself better. I couldn’t be sure why he was back, but if it was because of me, then I would fight harder. There was no way I would make the same mistake twice.

And better yet? When they FINALLY talk again, the intensity, the emotion, the things that were said (regretful or not), were SO real, it was as if the author had experienced exactly this kind of love, and subsequent heartbreak, herself. One of the most realistic, emotionally heartrending, desperately heartbreaking pleadings and defenses… from both characters, that I’ve ever read.

Why are you here? If I end up hating you, it would be easier for us all. Please. Please make me hate you. Why don’t you just finish the job so I can get on with my life!”

And it doesn’t get pretty for a while. In fact, Jack has his work cut out for him, but he’s in love and he will do whatever it takes.

Despite Keri Ann’s misgivings and absolute fear of ever losing her heart like that again, the heart wants what the hearts wants, even with the threat of emotional obliteration constantly looming in the background.

Seven long months to get over him, and I threw away my pride in seven seconds.

Fool me once, shame on you, fool me twice, shame on me. But oh what a treasure it is to be a fool in love. There is nothing more raw, more honest, more “alive”, than that!

And you know how it is. Jack the “real guy” might *think* he belongs to her, but Jack, the celebrity, belongs to Hollywood. And boy oh boy, does it come a-knocking once again.

“…I already know where this ends. I’ve been there.”

*spoiler alert!!!* I won’t exactly “spoil” it, but I’m analyzing stuff and you know, if you want to go in blind, it’s best to skip the next part*

Well… some Hollywood drama (realistic in a way,  I suppose) was introduced to really throw the characters off again, but… I dunno. For me, timeline-wise, this whole thing was explainable-away. <— LOL! Yeah that’s bad. 😉 But back to the drama. Considering arrival and departure dates and digital time stamps, and just the whole thing in general, there would easily be a kink in a few impending radical rumors. His publicist had this one in the bag, easily, if you ask me. 😉

That, and just as things were gonna get Hollywood-messy again, the story ended. Tied up with a bow via a sweet epilogue (albeit a few years later *gasp*!!), when I could have definitely indulged in a few extra chapters (or maybe even a whole other book!) of facing Hollywood head-on, and delighting in the aftermath. In fact, I expected it.

Still… the epilogue tied up a few loose ends and thank goodness for that!

A sweet love story with it’s fair share of romantic-angst and a satisfying conclusion.

P.S. I’m a huge fan of Jazz and Joey, so I can’t wait to see where this next one (All That Jazz: A Butler Cove Novel <— a spinoff) goes! 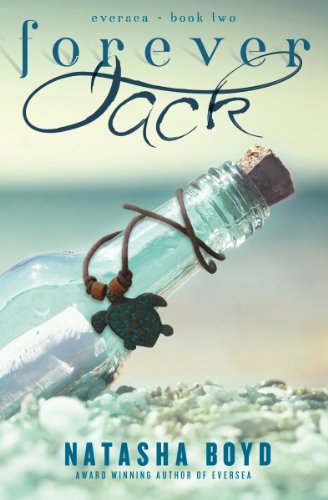 Started Eversea this weekend and I must say….I am a total fangirl of Jack Eversea!!! So loving this series…

Maryse….I think my name should be Jazz! Total fangirl for Jack Eversea! Just finished Forever Jack…and I loved it! Totally a sweet soulmate kinda love…gets me everytime! Take a hottie actor, a hometown sassy girl, off the charts attraction and yeah, it got me. Loved the slow build of the relationship, just enough angst to shake it up and (call me crazy but…) great all out sob fest. Not sure why but I enjoy a good break down, next to hysterical moment if appropriate. I did feel like K.A. (not our fav KA) was a little too wishy washy and self absorbed at times but not enough to overshadow.
Moving on to the novella!!!