X
You are here: Home / My Book Reviews / Miscellaneous / Book Review – Holiday with a Vampire II by Merline Lovelace and Lori Devoti

Holiday with a Vampire II: A Christmas Kiss\The Vampire Who Stole Christmas (Silhouette Nocturne (Numbered))
Since I would be busy over the Christmas weekend and didn’t think I should involve myself too deeply in a new series, I found this book with two short stories. I figured they probably wouldn’t demand my undivided attention, so I gave these a go. Since I’m trying to save all of my must reads for J.Kaye’s 100+ Reading Challenge, I thought I’d stick with stand alones, and anthologies for the remainder of the year. I’ve been known to get too caught up in a series ignoring all else around me, and perhaps that’s not very nice during family time (hehe). However, since I really can’t go more than 24hrs without at least a little bit of reading (or I go stir-crazy), I had to do something.

So the first book I tried didn’t thrill me. Not only did the stories not demand my attention, they barely captured my attention at all. I was bored. I tried to like ’em (I did). Meh…Oh well. I finished them at least.

First story (A Christmas Kiss): A female vampire, (drugged up by a recent dentist visit) is found wandering on the side of the road by a police officer, who ends up being enthralled by her, and takes her to his place. They “do it”, she spends the night, next morning he realizes as he smells burning flesh (she is sizzling in his bed by the sunrays peeping through his curtains) that she is a vampire.

They hang out some more, work out their glaring issues, and have a sweet moment with some neighbors. By night two, there is more “doing it” and they are officially in love, bad stuff happens (nothing more than a couple of pages worth) and well you know how it goes.

“Stay with me, Delilah.”

The plea came from deep inside him. He didn’t understand how this woman had worked her way into his heart so swiftly and so completely, but she had.

Story number two (The Vampire Who Stole Christmas), had a bit more “depth” but really, I was still so bored. A vampire, (Drystan), angry at the world, his rich, political family are his biggest enemies. Being an adopted member of their family, he felt he was “used” for political motives, before and after his death. While protecting his brother (Ben) from a drug-deal gone back, he ends up killed instead, and brought back by a vampire who finds him. Agonizing over the story his family made up concerning his “death”, he is hell-bent on revenge.

Aimee, a “Daemon” (earth angel of sorts) emotionally struggling after failing with one of her charges, is marrying said brother, and is approached by Drystan (hoping he can enthrall her away from “Ben” (as part of his revenge to the family). They get to know each other (Aimee’s able to resist Drystan’s mind control attempts, and also secretly knows what he is). They fall in love, but before Aimee lets herself go to him, she feels the need to see Drystan through his darkness. Despite wanting to avoid her Daemon “guiding” ways, she helps him come to terms with his anger.

Again sweet, but too much quiet talk and moody introspection. A few passionate moments, but I almost didn’t care whether they stayed together or not. Wait a minute. Where’s my Christmas spirit? Ok so maybe I did care a bit. I mean, the message was nice.

“Yours. I’m yours and you’re mine, and I’m never letting you go. Do you hear me? No matter what. Nothing can make me let you go.” 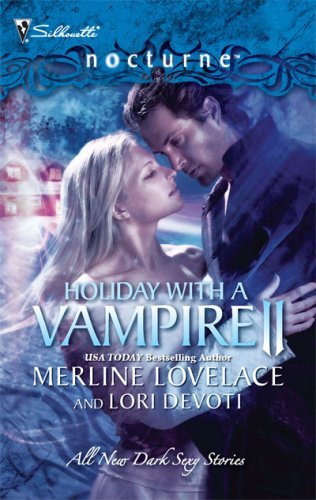 Hi, Maryse – sorry the anthology didn’t work for you. I had great fun with Delilah and Brett, tho. All my best, Merline

Unfortunately, I suspect the *short* part of it kept me from bonding to the characters as I normally do. However, I noticed that the ending seemed somewhat open to a continuation…Is that a possibility?