Hungry For You: An Argeneau Novel
OMG!! Have any of you read this yet? THIS was classic Lynsay Sands. Everything you’ve ever loved about the Argeneau’s (and crew) in past books – their wit, humor, loving side, passionate side and family side was in full force here. In fact I started this book last night (with a little trepidation considering my disappointment with her book, Born to Bite: An Argeneau Novel) and couldn’t help but read straight through until 3am. I’m exhausted (5.5 hours of sleep? I’m definitely an 8 hour girl), but as soon as I opened my eyes, I immediately started giggling again and thought to let you know I’ve lost my mind over a book!

One of the best in her series! A perfect blend of Argeneau’s and Hunters (Bricker is in full force here), the romance was intense, the drama went from bad to worse (in a good edge-of-your-seat way), and despite it all, I laughed until tears streamed down my face.  The reactions and thought processes of the characters made sense (mostly), and the situations were realistic. Well, maybe “realistic” isn’t quite the right word, but you know what I’m saying. No eye rolling from me, but plenty of wistful sighs.

Ok onto the story. It’s simple enough. Two of the three Willan sisters (three human girls that spent their summer – unbeknownst to them next door to immortals – the Rogue Hunter headquarters) have found their love “match” in members of  the immortal Hunters (to sum them up quickly, good vampires that hunt bad vampires – oh boy – Marguerite Argeneau would chastise me for sure for that description).

Here’s the thing. The vampires are not “out”. The secret must be kept safe from humans, and the only way to remain in a relationship with a human is to eventually “turn” them (with their acceptance, of course. These are the good guys, remember?) So that’s always fun. First the human accepting the vampire issue (tee hee!!), and then even better, having to choose between an eternity with the immortals (and saying goodbye to her human loved ones – since they will no longer age), or saying goodbye to the new love of their life, and having their memory of their beloved immortal and his kind, wiped forever.

The third Willian sister (Alex) has no clue about her sister’s “situation”. She knows just that they are both madly in love, but has no clue that, unless she finds someone like they have, she will eventually never see them again. Her sister, Sam, is desperate to introduce Alex to one of the immortals so that the three sisters can secure their future together. Easy enough right? Nope.

An immortal, despite finding someone attractive, can only truly fall in love with a “life mate”. One of the most obvious ways to confirm they have found that person, is in the inability to “read” them. All immortals can read the thoughts of, and control humans (and each other – to some degree). A life mate, by nature, cannot be controlled, creating a “guards down” safe haven for each other to relax and be themselves, in trust and in true (not controlled) love.

Every “man” that Sam has since introduced to Alex, has discovered that he could read her, meaning, no match. An immortal can be alive for thousands of years without ever meeting a life mate, so what are the chances that in the small group Sam has access to, that she will find one for Alex?

But Marguerite Argeneau knows. She acts (unofficially) as the den mother of the whole crew, and is seemingly all-knowing. When she gets a “feeling” she’s usually right, and she has a feeling her nephew Cale, might just be the one.

…Aunt Marguerite had a “feeling” this Alex might be the woman he’d waited for his whole life. Cale wasn’t holding out much hope that Marguerite was right. As old as he was, he’d pretty much given up hope on ever finding a life mate. He’d pretty much resigned himself to being eternally single. But he also hadn’t wanted to offend the woman, so had agreed to come meet this Alex.

Alex, running two restaurants that are suddenly hit by a string of non-stop bad luck, is one chef short and is introduced to Cale. Acting as a chef from Paris (yeah, right…he hasn’t eaten in over a thousand years, and the smell of food turns his stomach), but Marguerite insisted, and so there he is, testing fate.

“Kale?” Alex echoed blankly, her eyes sliding to the still half-closed door. She didn’t see any evidence of a second man. Frowning, she set the phone back in it’s receiver and leaned to the side, trying to see out into the kitchen as she muttered, “Kale is a vegetable.”

“Not kale. Cale… with a C,” Bricker explained, and then glanced around and frowned when he saw that the second man hadn’t entered. Scowling, Bricker stepped out of the room briefly, and she heard him mutter, “What are you doing, man? Get in here and try to read her.”

Alex’s eyebrows rose at the words, and she briefly wondered what they meant, but then Bricker reappeared, dragging a man in a charcoal-colored suit into the room as the fellow said, “I was looking for something to cover my nose and mouth with. Dear God, how anyone can work around all this food is beyond me. The stench is unbearable. I -”

Alex arched one eyebrow as the man spotted her and came to an abrupt halt just inside the door. She’d opened her mouth to snap that her kitchen did not stink, but the words never made it passed her lips. She found herself simply staring at the man. He was…interesting. Not handsome in the classical sense, but definitely interesting, she decided and GQ worthy in that suit. Her gaze quickly slid over his tall, muscular build, clothed in what she was sure was a designer original. Then her eyes paused at his face to take in the strong, angular features, silver-blue eyes, and clear complexion.

What was it with all these friends of Mortimer’s? She wondered with a frown. Every single one had perfect skin and arresting eyes.

“Well? Can you read her?” Bricker said impatiently.

“What?” Cale glanced toward him with confusion that seemed to clear quickly. “Oh right.”

His gaze shifted back at her, and Alex found herself sighing as he focused on her with concentration she recognized from every other male Sam had introduced her to since hooking up with Mortimer. It was the look that usually preceded the man’s then completely ignoring her or even walking away, the look that was giving her a complex.

“Great! Another one of your and Mortimer’s weirdo friends,” she muttered with disgust…

…Bricker glanced at Cale. “Can you read her?”

“Read what?” Alex asked irritably, her gaze shifting back to Cale to see that his expression had become even more concentrated, focusing on a spot in the center of her forehead.

“You can’t, can you?” Bricker said with what sounded like glee.

“No.” The word was barely breathed, and the deep concentration on his expression faded to be replaced by a slightly stunned expression.

Suddenly his nausea is forgotten while he does anything he can to stay by her side and get to know her (even burning a few too many gourmet dishes in the process). You’ll love the unusual friendship that develops between the two, the passion as it builds, and the frequent walls he hits as he attempts to hide his secret from her until she is ready (and honestly, when is the human ever ready for that?). And of course, Alex is not making it easy on him. Recovering from a very bad break-up, and struggling to keep her businesses open, she simply doesn’t have the energy for (or the faith in) starting another romance.

From here on out, you will be reading with a goofy smile on your face, and waking up the snorers in your household, chuckling incessantly, as you find yourself staying up all night to finish this read. Unputdownable!

Thank you Lynsay! Thank you! Now I know that the future of the Argeneau’s is still safe in your mind and heart. You’re still “feeling” them and this one was a winner for sure!

This can be read as a stand-alone, no problem, and totally worth it if you’re interesting in trying the series, but the entire series is pretty much fabulous. Interested? Here’s the reading order guide: Lynsay Sands – Argeneau Vampires Series Reading Order

Ok so now, anyone who’s read this book…let’s talk about how funny that spoon scene was! LOL!! So many funny moments in this (many) but at that point, I was in hysterics, laughing so hard. I tried to continue reading, but would interrupt myself with a whole new fit of giggles. And then there was more to giggle about after that! Ahhhh Bricker, you’re the new “Thomas” now. I can’t wait for your book, but then again, I hope she keeps you single for a long time, cause I’m having too much fun with you! *heart* 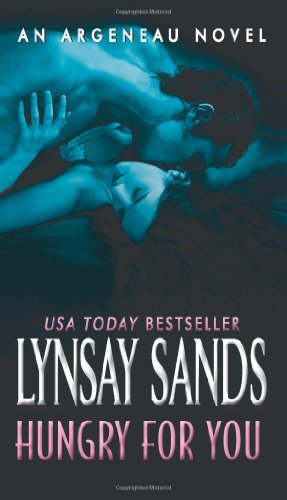 I haven’t read it yet but I feel like I am going to have to stop mid-series (Alyssa Day’s Warriors of Poseidon) and read this. I love Lynsay Sands and the Argeneau’s♥ Great review Maryse!

Yes!! Read it so we can laugh together over Bricker 😉

I read this last week. Was soooo funny. Love the spoon scene lmao. So funny how Bricker says was there something you wanted or were you just trying to spoon me to death lol.

Oh I know!! And her makeshift “hat” – hilarious!

I FINALLY got a chance to read this, lol. Had to read Last Sacrifice first 😉 I loved this book! Bricker is sooo funny- I can’t wait for his book. I loved how Alex tries to sneak in to “stake” Bricker with the spoon and everyone’s all annoyed that she interrupted them holding Sam down, lol. Great book. I love the Argeneau clan 🙂

Does Thomas have a book in this series?

Yup! (Vampires Are Forever) –> He was one of my favorites. Here is my review for his book: https://www.maryse.net/books/book-review-vampires-are-forever-by-lynsay-sands.html

I haven’t read this one yet but love the series and after your review I can’t wait! What I love about her books is you get your supernatural romance fix but u hget to laugh your ass off also